Behind the scenes – and on the scene – at Facebook FightNight Live 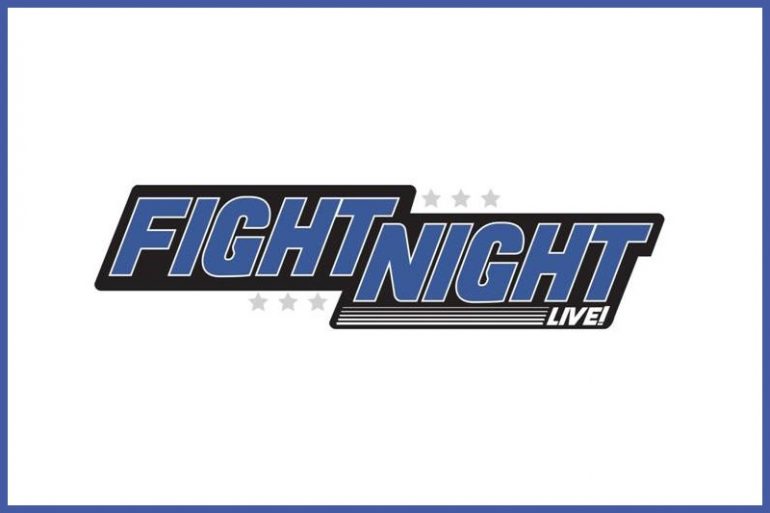 Now don’t tell anyone but often times we know we are running a show months in advance but hold off on announcing it till almost last minute. Why? Think about it; promoter wants people to show up, buy the beer and not just assume they can get the milk for free. Gotta pet the cow…

Last Friday’s venue is the Paramount, in Huntington, Long Island, New York, and Joe DeGuardia of Star Boxing is the promoter. Joe has been active since the 1990s and does pretty well for himself. He grinds it out, finding talent from the pool and nourishing them at shows like this. Matter of fact, one of those success stories, junior welterweight Cletus Seldin, joins me and Xavier Porter in the booth for a few fights.

Seldin tells us he had Tommy John surgery (ulnar collateral ligament reconstruction) but is now back, ready to rumble. He thought he might fight on the show, topped by a Johnny Hernandez vs. Marquis Hawthorne scrap, but no…so he’s hungry for a date.

I like to be earlier rather than later, so I have two hours to get to the venue, from Brooklyn, and I make it in an hour forty-five. I’m met by a pal who tells me he heard there were hijinks at the hotel between two fighters’ camps and heard someone smashed a coffee mug in someone else’s face. My mind wonders…What if constables show up during a fight and yank out an offender? Has that happened before? I’d assume so; this is boxing. Everything has happened before. (It does not happen, for the record, and those two fighters fight and the corners even shake hands after the verdict too.)

Mark Fratto of Linacre Media started the Facebook FightNight Live series two years ago and he’s on site, as is Xavier Porter, who will do analysis, while I do play by play. Fratto gives me the update, the what’s what, on when we are starting, etc. Then I see Alfonso Gomez, the ex-“Contender,” and ask him what he’s doing here. Funny you should ask, he tells me.

He tells me he got a call off Facebook and a picture comes up of a guy in a mask. He picked it up, against perhaps his better judgement, he says. It’s a man he doesn’t know, calling from Texas. The man, Javier Martinez, says he is a boxer, has a fight tomorrow and his trainer is unable to attend. Could Gomez come to New York and work his corner? Gomez hesitated, asking himself if he is crazy…Nah, not crazy…He said yes. Didn’t ask the payment or whatever. He booked a flight and here he is, he told me. Life is about collecting stories, Gomez informs me and he likes this story. He likes how Javier went out on the limb and showed the cajones to approach someone he didn’t know from Adam. So he is here and looking forward to seeing his guy spring the upset. Yeah, a bunch of people asked him how much he’d be getting paid…That’s so not the point, he said. He’s made a few bucks and, again, life is about collecting stories. Oh, for the record, Gomez last fought four years ago and, yes, he still gets the itch. Not for like two years but, of late, he wonders…Could I do it one more time? So it could happen because boxing is in his blood and that doesn’t go away, like a cold. What a gent, Gomez, 39 in October, is a cool cat.

We tick down to fight time…

I walk around and see if I can find out the wi-fi login and password. Sometimes it’s harder to find than you think. I guess some places don’t want the network overloaded, so they keep it on the down low. I got it but, sorry, can’t share it with you.

Ticking down to the taping of the open. That’s when we stand up there, grins plastered on faces and tell you who and where we are and what you about to see and why you should be thrilled to be seeing it all. If you ever see me in my car en route to an FNL event and you see me talking to myself, that is probably what I’m talking about. I’m rehearsing the names of the fighters, probably the main event guys, for recitation.

We kick off…You notice ring emcee Fratto says we are in “the U.S.A.” Makes sense, being that the free stream makes it certain that many tens of thousands of people will be from outside America. First fight…Floridian Earl Henry against junior middleweight debutant Jeffrey Muriel, who has former WBA welterweight titlist Aaron “Superman” Davis in his corner. Muriel got the W…

We saw Chris Algieri, who got built up in this joint, was in the corner of welterweight Alex Vargas, with head trainer Andre Rozier. Vargas got the W when Ben Borteye indicated his groin was hurting too much to continue after round two. However I didn’t see a low blow.

Seldin joined us in the booth for the third fight. And hey, there’s the dude who asked me for the building wi-fi info, rapping as junior welterweight Dashaun Johns enters the arena. Expletives went undeleted but luckily Facebook has no ban on salty rapper language. Seldin noted that opponent Derron Lawson had expensive trunks on and started out on point…but then Johns came on. Johns got the W and is 2-0. “Lawson is flashy and has style but that’s not going to bring you far, even in these four-round fights,” Seldin noted. My guy Xavier Porter gave Johns a D-plus because he expected more from the victor.

Next fight, our man Gomez came in with Martinez, a junior welterweight, who was wearing “that” mask. The Texan started out with vim and stuck it out but was not as athletic as Wyandanch’s Terell Bostic. Seldin gave Alfonso props for going out on a limb for someone he doesn’t even know. Porter said Gomez told him “It had nothing to do with money,” on the broadcast. Bostic snared the W, for the record.

Next, Joel Djeko and Simone Federici battled. Belgium’s Joel shoved the Italian at the weigh-in and we heard their camps had a beef at the hotel the day of the fight. Federici clubbed a lot and showed good heart trying to win the whole way through but his judgment was off, as he seemed to think he won the fight. Nah…the judges got it right, seeing Djeko as the better cruiserweight. Seldin, Porter and I agreed that Djeko is close to being a contender, but let’s check back after three/four/five more fights.

Junior welterweight Johnny Hernandez met Marquis Hawthorne in the main event. “Hitman” has just one KO in his nine wins but he sticks with that nickname. “He’s the ‘Get Hit Man,'” said Porter during round seven. “From Huntington, Long Island…,” bellowed Fratto and we heard enough boos to indicate many thought Hernandez didn’t deserve the majority decision. Cara Castronuovo – who told us she almost fought on this very card – called it a “competitive” fight and indeed one judge called it a draw; the other two liked the Hitman’s effort. I ask X and Cara what their highlights were; I give my gold star to Fratto because he works so hard on this series and I appreciate him having me on board.

All in all, solid show. It was standing room only. My buddy Brendan on Twitter told me to hit a local pizza joint, “Vincent’s,” whose specialty is a “cold cheese” slice. WTF that is, I’m on it…Basically it means they dump on a load of mozzarella onto their cheese slice. And yep, it wasn’t at all bad. I head home, make it in an hour and know I need to do some a.m. homework because we are doing FNL in Philly the following evening. The highlight there will be working with Premier Boxing Champions fighter Steve Cunningham and the angry text I get from one of the fighters’ fathers on Sunday, after he watched the show and didn’t care for my assessment of his boy.