One more trip through the ropes for David Tua 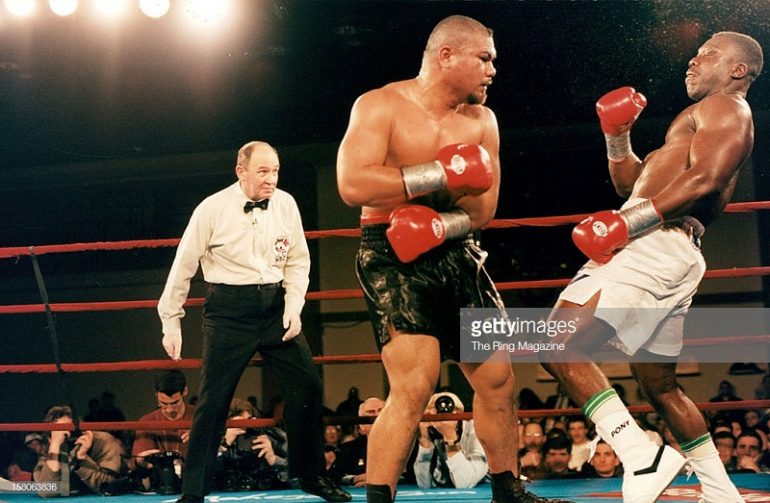 David Tua refuses to discuss any future boxing plans past Saturday night. One week shy of his 41st birthday, Tua knows that each time he steps through the ropes could be his final time in a professional boxing ring.

Once regarded as one of the most feared punchers in heavyweight boxing history, little is known about what Tua has left in the tank as he approaches his clash with Alexander Ustinov at the Claudelands Arena in Hamilton, New Zealand.

The 12-round bout will be Tua’s first in over two years, but with a regional WBA title at stake, a win could catapult Tua right back into the heavyweight title hunt.

But 21 years on the roller coaster ride of professional boxing have taught Tua better than to take anything for granted. His approach heading into Saturday’s bout can best be described as cautiously optimistic.

“I’m not going into this fight just to make the numbers or to be a side attraction,” said the Samoan born New Zealand resident Tua (52-4-2, 43 knockouts), moments before having an audience with New Zealand’s Maori King Taheitia Paki on Thursday afternoon.

“I know that the preparations that I’ve put myself through are very tough, so all that I could hope for is my best performance and that I come out victorious.”

Tua hasn’t fought since August of 2011, when he lost a unanimous decision to Monte Barrett in a rematch of their first fight, which saw Tua hit the canvas for the time in his career en route to a controversial draw.

Now Tua meets Ustinov, a 36-year-old Belarussian who stands 6-foot-7 and has weighed over 300 pounds in his last four fights. Though Ustinov holds a boxing record of 28-1 (21 KOs), he has achieved far more acclaim in the kickboxing world, where he has won three world titles.

Ustinov has been more active recently than Tua, but is just one fight removed from the sole loss of his career, an eleventh round knockout against Kubrat Pulev last September.

Ustinov is aggressive and strong, but slow and robotic. He’s the type of fighter that a prime Tua would’ve feasted on.

“He’s a willing fighter, he’s a big man, a dangerous opponent,” said Tua of Ustinov. “I’m looking forward to a great fight to see what I can do. I’m in great shape.”

Tua’s career has been defined as much by his explosive knockouts as his anticlimactic shortcomings. Once lauded for having the hardest left hook in boxing and one of the most granite chins, Tua injected a lot of excitement into the heavyweight division during the 90s, scoring explosive knockouts over future and former titleholders John Ruiz, Michael Moorer and Hasim Rahman.

The flashes of glory were contrasted by disappointments, which included a listless performance in a decision loss to Lennox Lewis in his lone world title vie in 2000. Tua had gained a reputation for not being able to win “the big one” when it counted.

Tua’s hard times have not been reserved exclusively for the ring. Beginning in 2003, Tua found himself entangled in an ugly legal battle with former managers Kevin Barry and Martin Pugh. Tua spent the next six years of his career largely inactive, fighting the occasional tune-up bout as the heavyweight belts switched hands among a forgettable slew of fighters.

Tua and his former managers eventually settled out of court with undisclosed terms.

Last year, Tua announced his retirement from boxing as he dealt with divorce from his wife Robina. New Zealand news outlet Stuff.co reported at the time that he had owed $2 million in taxes.

That same news outlet reported this week that Tua was sleeping in his boxing gym in Auckland. This after having reportedly made over $20 million in his career.

“I’m not going to dwell on things,” said Tua. “Things happen, I just need to stay positive and stay on top of things. I’m no stranger to experiencing challenging times. I guess for me, my thing is to stay upbeat and be positive about every situation.”

When asked about his motivations for returning to the ring, Tua didn’t mention money or fame. “I love winning and I love challenges,” said Tua. “Everything that has happened as far from the challenging times has made me more determined to keep trying and never give up.”

A win on Saturday night could change his fortunes, at least in the short-term. Ustinov is promoted by K2 Promotions, which handles the Klitschko brothers Wladimir and Vitali. The Klitschko brothers hold all four belts that are worth the leather that binds them together, but lack notable opponents to defend them against.

David Higgins, who heads up Duco Promotions, with which Tua has a promotional agreement, said the goal would be to arrange a title fight should they win. “If Tua beats Ustinov in style we would certainly push for a title shot. Tua would have the credentials and we have built a good relationship with K2 promotions.”

Tua could present himself as a “name” opponent with some lingering marketability. A name like Ustinov on his record would add a modicum of credibility to him as well. Fighting one of the Ukrainian brothers would be his ticket to a seven-figure payday and a semblance of financial stability.

“They’ve earned the respect of the world because they’re doing enough to win, they’re doing what they have to do and they’re world champions,” said Tua of the Klitschko brothers. “I have a lot of respect for them and it’s been fantastic to see them reign for quite some time.”

Tua says that a title opportunity “would be a dream come true,” but adds “the most important thing for me is that I have to win this fight first. Whatever happens after that, then we’ll see.”

Just as in virtually every fight he’s ever participated in, Tua remains one punch away from victory over Ustinov. Things are never that simple when it comes to David Tua, however.

“It’s not going to be the end of the world,” said Tua, when asked about the possibility of losing to Ustinov. “If things don’t go well they’re not going to put me in the electric chair and execute me or anything like that. In the sport of boxing – I’ve been fighting for quite some time – it’s a miracle that I’m still involved. All I could hope for is the best result and whatever that leads me to, that would be fantastic.”

Just as Tua takes his life one day at a time, so too does he handle his career.

At this point, there is no other way.