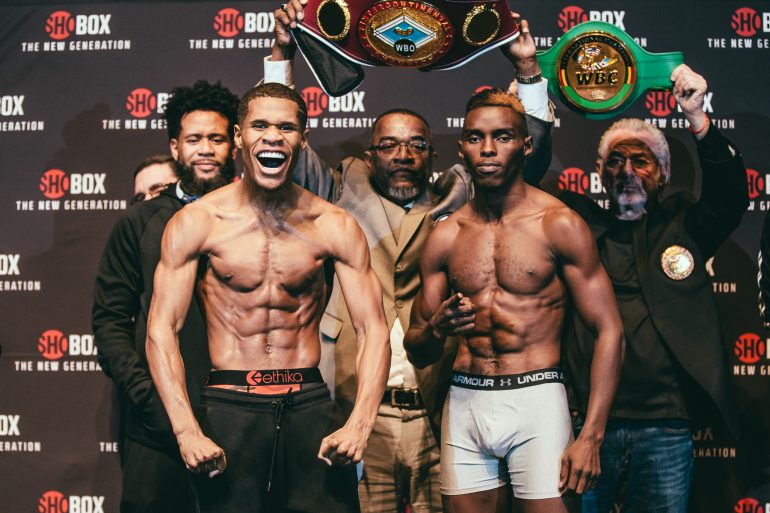 Devin Haney and Xolisani Ndongeni looked ripped and ready for the first ShoBox main event of 2019 at the weigh-in. Photo by Rosie Cohe/SHOWTIME
11
Jan
by Doug Fischer

Devin Haney wanted to make a statement in his first fight of 2019 and the message, made on the first ShoBox: The New Generation telecast of the year, was clear: “Don’t call me a prospect, I am a lightweight contender.”

His statement would have been louder had he scored the stoppage he tried so very hard to get against the more-mature and experienced (and ridiculously tough) Xolisani Ndongeni, but the precocious boxer-promoter had to settle for a lopsided unanimous 10-round decision.

Haney (21-0, 14 knockouts), who won by scores of 100-89 (twice) and 99-90, dominated the previously undefeated fringe contender over the 10 rounds of their main event on Friday in Shreveport, Louisiana.

“I knew that it wasn’t going to be an easy challenge,” he said during his post-fight interview on Showtime. “He was game, he gave me a challenge and he gave me the experience, but I got the win, so I’m happy. I don’t choose my opponents, he was there to fight me and I don’t turn down tough guys.

“You all know what I’m going to say next, I’m a f__king contender. I want those top guys.”

Is he ready for the top 135-pound contenders? Who knows? But he’s headed in the right direction and the manner in which he fought Ndongeni ensures that hardcore fans will want to watch every step of his march up the lightweight rankings.

Haney, who closed 2018 as The Ring’s No. 8-rated lightweight, is one of the more celebrated young boxers from America. If there was a knock on the 20-year-old Las Vegas resident it was that he lacked punching power and wasn’t always must-see TV. The San Francisco native, who formed his own promotional company last year, obviously wanted to address those criticisms against Ndongeni (25-1, 13 KOs).

Haney started faster and more aggressive than usual, rocking Ndongeni into the ropes with right hands at the close of the opening round, dropping the South African in Round 2 and hurting the 28-year-old with body shots in Round 5. Haney was faster and more fluid with his jab and more accurate with his power shots, but Ndongeni refused to give up and was able to hang in there with a pesky jab, lateral movement and desperation right hands that sometimes found their mark. But nothing Ndongeni did could deter Haney who pushed like hell to score a stoppage in the final minute of Round 10 but though he had his opponent on wobbly legs, he couldn’t completely crush the older man’s spirit.

Had the bout been scheduled for 12 rounds, Haney definitely would have added to his KO tally. His strong finish against Ndongeni suggests that he’s ready for the championship distance.