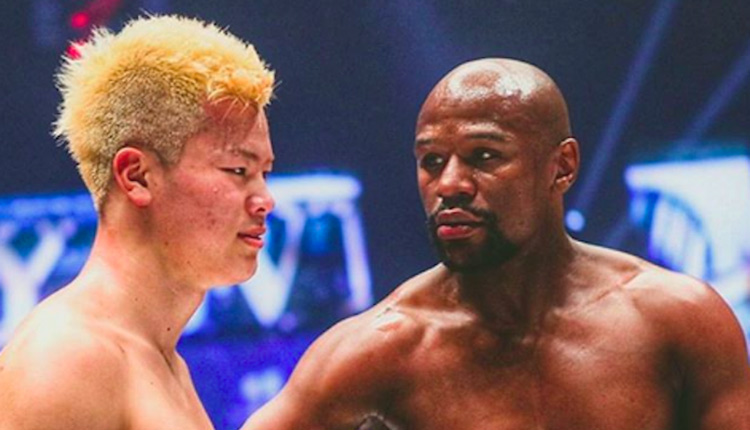 Some of Dougie's favorite boxers were in action during the New Year's Eve weekend - including Hiroto Kyoguchi, Ken Shiro and Kazuto Ioka - so, of course, nobody emails him about those guys and he gets a Floyd Mayweather email. (oh well, at least someone asked about Donnie Nietes)
04
Jan
by Doug Fischer

Did you catch Floyd “Money” Mayweather’s exhibition bout on new year’s eve? He knocked out a precocious kickboxing champion in 90 seconds. He made $9 million for his trouble. He laughed throughout the match at the ineptitude of his task to the indignation of the commentators, then proceeded to knock his foe about like a hapless piñata. After dispatching his man, he danced and then offered him high praise during a perfunctory in-ring interview. The event certainly didn’t enhance the dignity of the sweet science.

I only bring it up for one reason. Watching the short spectacle and learning of the sum earned for such light work, the insignificance to boxing notwithstanding, nor the scathing remarks by Bob Aurum or the withering criticism from fans, Mayweather sold his service for the maximum price. Isn’t this the responsibility of sportsmen? Is money worth more than glory? We admire glory and attitude which propagates the sport, while despising moves for financial prosperity. I for one want the best fights made, but it doesn’t always make the most economic sense for the fighter.

Here is the real question for the new year: what is the fighter’s ultimate responsibility? Money can’t be made without the glory and guts, but glory and guts alone lead to broken men (I often think of blind and destitute Sam Langford). The ranks of boxing should be populated by businessmen with a service and incentives to reward their guts. What do you think? Best to you and the family this year! – Mike in Japan

Thanks for the well wishes, Mike.

No, I did not watch the Floyd Mayweather-Tenshin Nasukawa exhibition live. (I didn’t know how to see it live and I didn’t deem it worthy enough to search out a stream, let alone to stay up to watch it. There were real championship boxing matches – including 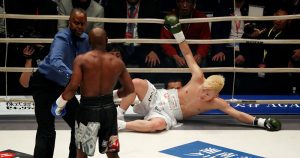 Nietes vs. Ioka and Budler vs. Kyoguchi – taking place New Year’s Eve.) However, I didn’t have to tune into the “Mayweather vs. Kenshin exhibition” live to get the gist of what happened. It was such a gross mismatch that it didn’t last 3 minutes, so I was able to view most of the “contest” via Twitter clips. My only thoughts on the social media reaction to Mayweather-Tenshin was “Who cares?” and “Why would anyone even bother to analyze it or call it a ‘fixed fight?’” The bout was “fixed” the moment it was announced that it was taking place under boxing rules. I’ll never understand anyone’s fascination with Mayweather post-Pacquiao.

And if fans want to glorify prize fighters’ pursuit of money, that’s their prerogative.

Seriously, I’m fine with anyone who wants to celebrate Mayweather for his “business acumen” and his extremely dedicated pursuit of rewards over risks where the prize ring is concerned. However, if that same individual that lauds money over glory where Mayweather is concerned then craps on Anthony Joshua or Canelo Alvarez or Keith Thurman or any one of a dozen world-class champs that are very carefully building their ring legacies by making the right moves at the right times for the right money… well, my Japan-based friend, I call BULLSHIT on that fan.

I’m not saying that you are one of those fans, by the way. However, I will say that you’re oversimplifying Mayweather’s choices by splitting them between “money” and “glory” (in a rather transparent attempt to defend him from critics). There are other key facets to what he does (and why he does it), chief among them PRIDE and EGO.

But before I get into that, you should be are aware that for ultra-talented (former Olympic-medal-level) boxers like Mayweather, one doesn’t necessarily HAVE to choose between money and glory. It’s possible to do both. Sugar Ray Leonard made insane amounts of money during the 1980s without relegating himself to sideshows. My boyhood hero only fought 40 times as pro. Andre Ward, who I’m fairly certain has held onto every penny he ever earned in the prize ring, retired financially secure after just 32 pro bouts. Both are doing fine in retirement (especially Ray, I’ve been to his house), both are healthy and enjoying commentating gigs as well as various business ventures. Mayweather, who has fought 50 pro contests (49 if you don’t count the McGregor “fight”), could do the same if he wanted. He should be set for life (for several lifetimes, actually) and he should be 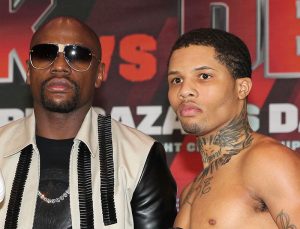 Floyd could probably be a better promoter to his fighters, but that’s not where his heart (or ego) is.

content with his ring legacy. However, you’re not going to see him join any broadcast booth like Leonard or Ward (or Roy Jones, Tim Bradley, Paulie Malignaggi, Sergio Mora, etc.) because he views it as beneath him (plus, it’s work, and his EGO won’t allow him to work for anything but millions of dollars), and he’s not going to commit himself to his promotional company like Oscar De La Hoya because his ego is so out of control that he can’t stand to witness young fighters come up and take the spotlight (even if they are under HIS promotional banner!!!).

So, what’s he going to do? There’s only so much enjoyment he can get from lavish world travel, shopping sprees, sports gambling and managing strip clubs. His daddy raised him to be a boxer, that’s where his PRIDE resides, so he’s going to keep flirting with ring returns. However, as his body ages (hey, it happens to the best of us), the more risky legit boxing matches (against even middle-of-the-road pros) become. So, we might see more of these weird exhibitions from Floyd in the future – if not against various MMA or kickboxing stars, than maybe vs. pro wrestlers or rappers or actors. It can be anyone as long as he (or she) has some level of fame. It’s not just about money with Mayweather, it’s also about the spotlight. He’s need attention more than he needs money.

But it’s all good. I’m not going to say he shouldn’t do any of that. If he’s not sharing the ring with a real boxer, I don’t have to cover it or comment on it if I don’t want to. If he winds up facing the winner of Pacquiao-Broner this year, rest assured you’ll see plenty of feedback on that match in this column and plenty of coverage on RingTV.com and in The Ring magazine. If he “fights” Ronda Rousey (which, like it or not, would be a huge event) or Charlie Zelenoff (yeah, his daddy did it, so why not?) I’ll choose to ignore him. There are more than enough well-compensated prospects and world-class boxers out there to command my attention (and I’m certain that many of them are financially responsible).

He knocked out a precocious kickboxing champion in 90 seconds. He made $9 million for his trouble. He laughed throughout the match at the ineptitude of his task to the indignation of the commentators, then proceeded to knock his foe about like a hapless piñata. Honest question: If some billionaire weirdo wanted to pay Mayweather a couple million bucks to literally shoot fish in a barrel and stream it live worldwide, would A) you tune in, and B) bother to defend the sordid ordeal against Floyd critics because he’s being a “responsible sportsman”?

After dispatching his man, he danced and then offered him high praise during a perfunctory in-ring interview. Was that entertaining?

NIETES VS. THE PHILIPPINES’ FINEST

I’m just trying my luck here. It’s my first time writing but I’ve been an avid reader. Just want to throw in some mythical match ups for Donnie Nietes:

In all the weight classes he has campaigned in.

Thanks for the response and God bless. – Adonis

Thank you for the Blessing, Adonis. Happy New Year to you. 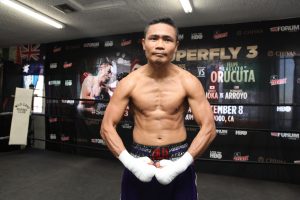 Major props to Nietes for winning his fourth major world title in a fourth division. Personally, I thought Kazuto Ioka won the fight by a narrow 115-113 (or seven-rounds-to-five) margin but there were many close rounds, so I would have been cool with a draw and I have no problem with either veteran winning seven or eight rounds (but, damn, Levi Martinez’s 118-110 tally for Donnie was AWFUL). Regardless, the 36-year-old veteran has been unbeaten for 14 years (and his one loss was a split nod to an over-the-weight fighter) – a span that includes 35 bouts, world titles in four weight classes and victories against 11 major beltholders (if you count interim titles). Not. Too. Shabby.

I’m looking forward to seeing Nietes fight again in the U.S. sometime in 2019 – either a rematch against Ioka, or a showdown with Ring champ Srisaket Sor Rungvisai, Chocolatito or Juan Estrada. The best 115-pound fighters are experienced, complete boxers with incredible courage. There are only good matchups among elite junior bantamweights.

With that said, I’ll get into your mythical matchups:

Nietes vs Brian Viloria – Nietes by close but unanimous decision at 108 pounds, Viloria by split decision at 112.

Nietes vs Manny Pacquiao – Nietes by competitive but clear decisions at 112 and 115 (a weight class PacMan leapfrogged, along with 118).

Nietes vs Jerwin Ancajas – Nietes by clear unanimous decision at 115.

My always ongoing thanks for getting my day started in a good mood twice a week.

I still cannot get the Fury-Wilder fight out of my head. (I call it that because, much as I like Wilder, I don’t think he won the fight or even earned a draw.) It seems to me that Fury was consistently ducking under Wilder’s right-hand bombs – except for the two that caught him.

If Mark Breland can teach Wilder to throw an uppercut, I think Wilder will clock Fury in a rematch. Best. – Leslie Gerber, Woodstock, NY

Wilder might clock Fury in the rematch, regardless, Leslie. That’s the kind of threat the unbeaten WBC heavyweight titleholder is. He’s a gifted athlete, one of the purest punchers in the game, not a front-runner, retains his scary power for 12 rounds, tougher than he looks, recuperates fast, and he never stops trying to decapitate his opponents. 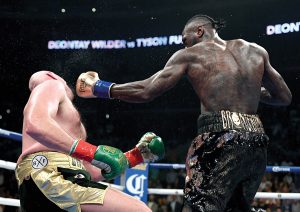 Wilder’s got a bomb left-hook when he remembers to use it.

He’s also reckless/impetuous, clumsy, and lacking creativity and basic fundamentals. That’s why he’s as vulnerable as he is formidable, which makes him rather fascinating in my book. Can he learn to throw a proper uppercut at the proper time? I don’t know. He didn’t put a hook behind his right hand until the final round vs. Fury. Wilder is what he is. He’s 33. He’s been a pro for 10 years. He’s got 41 pro bouts under his belt. I don’t think we’re going to see him add many “wrinkles” to his game, and I’m OK with that. I’ll still watch with interest.