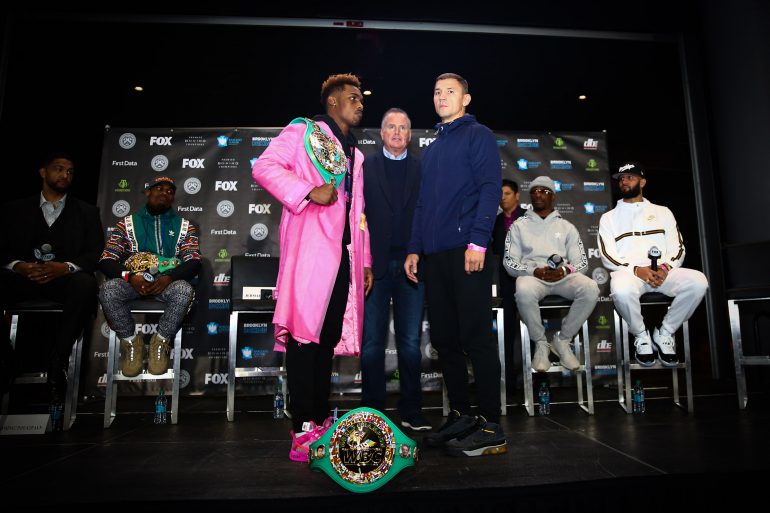 Matt Korobov was lined up for an eight-round fight against Juan De Angel on the off-TV undercard Saturday in Brooklyn.

That fight was contested at 162 pounds. One week before the fight, six days before the weigh-in, Korobov was presented an opportunity to replace Willie Monroe Jr. in the FOX main event against Jermall Charlo (Monroe tested positive for a banned substance.)

Korobov didn’t hesitate: he accepted the fight on short notice, and on Friday, weighed in under the 160-pound limit at 159.8. Like his opponent, Jermall Charlo (159.6 pounds), Korobov showed off an impressive physique.

Jermall, too, must adjust on short notice. Though they’re both southpaws, Monroe is a boxer who likes to fight at range; Korobov is a pressure fighter. “It hasn’t affected me,” he said. “I’m ready for this. I’m born for this. This is what I do.”

Jermall’s twin brother, Jermell, defends his WBC junior middleweight title in the co-feature against Tony Harrison. Jermell weighed 153.6 pounds, and Harrison tipped the scales at 153.8 before they began jawing at each other.

Harrison recounted what he told Jermell: “You’re finally up against somebody who’s credible, just as fast, just as strong and I’m bigger.”

Heavyweight contender Dominic Breazeale opens up the PBC on FOX telecast at 8 p.m. ET with a 10-round bout against Carlos Negron. Breazeale weighed 256.6 pounds. Negron weighed 226.