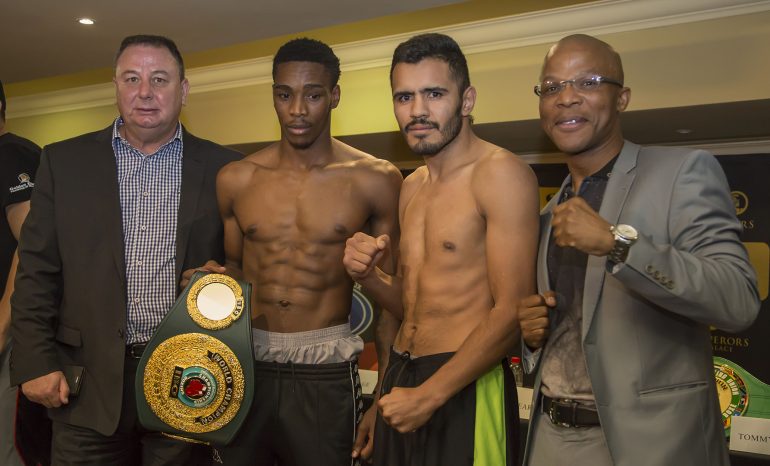 Mbenge (14-0, 11 knockouts) is looking for his third convincing win of the year. In March, the 27-year-old South African bested the much heavier Diego Cruz, and in June he scored a career-best win, stopping Diego Chaves in seven.

A convincing victory over Vazquez would be another statement, and it’s also an opportunity to better the ninth-round knockout win that Josh Taylor scored over Vazquez last year.

“I’ve seen that fight, but I don’t look at other people’s performance, I just look at what I have to do,” Mbenge told The Ring. “I have to execute the plan we have. If it goes rounds so be it. I’ll have to adjust to his movement and if I adjust quickly, then I’ll be able to knock him out.

“We’re going to work it out round by round, my last fight against Diego Chaves was all about timing.”

Mbenge’s trainer, Sean Smith, is wary of going gung-ho and looking for the knockout, and he isn’t concerned about matching Taylor’s stoppage win.

“Experienced guys lure you into traps and make you want to punch,” said Smith “You don’t want to set yourself up for big punches and get caught up in that experience. Box, take your time, be patient and if it comes like it did with Diego Chaves then it’s a bonus.

“You’re not fortunate to always make a statement, [Mbenge’s] trained hard, he’s probably the best he’s ever looked. Stay in the moment, fight the fight. It could end up a long messy night because he’s trying to make a statement. He reads rounds, some rounds he comes out and bangs, other rounds he needs to move and be smart – he can do that.”

Vazquez won the IBF lightweight title in August 2010 and made six defenses over four years before losing a controversial decision to Mickey Bey. He has since suffered defeats to Argenis Mendez and Taylor but bounced back with a 10-round decision over Cosme Rivera in his last bout.

“He’s a mover, he moves very well,” said Mbenge. “He’s not a good puncher but he’s a sneaky puncher. He doesn’t really jab, he just counters. I’ll have to jab him all the time.”

Mbenge knows he has to be at his best to avoid Vazquez’s spoiling tactics and come away with a solid win, but if he can do so bigger opportunities will surely follow.