Tyson Fury overcame odds to make it back; he vows to shock again with KO of Deontay Wilder 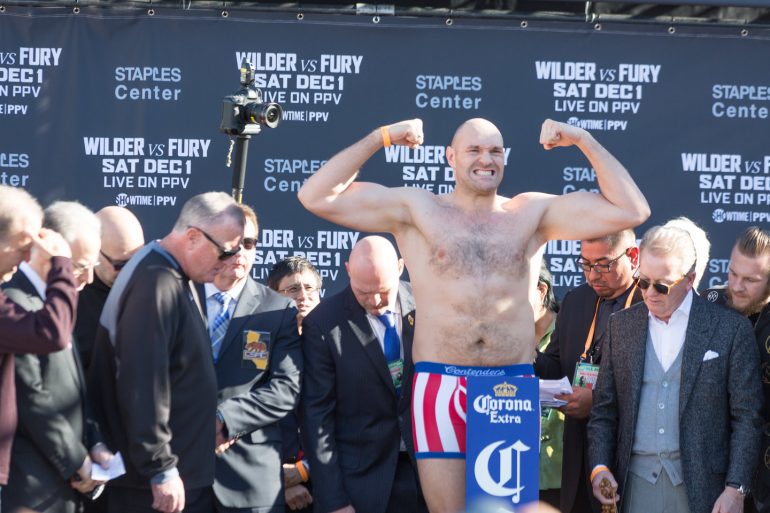 Todd Westphal/Special for The Ring
30
Nov
by Mike Coppinger

Few believed he would do so. After he reached the pinnacle of the sport with a shocking victory over Wladimir Klitschko in November 2015, his mental health began to spiral out of control.

Fury (27-0, 19 knockouts) acknowledges he’s long battled depression. When he became heavyweight champion of the world and still couldn’t find joy, it hit him like a freezing winter morning right in the face: he might never find happiness.

So he ate. And ate. And ate. He blew up to nearly 400 pounds. He struggled with cocaine addiction. Fury encountered problems with alcohol, too. He lost everything. His three heavyweight titles. The pride that originally accompanied that feat. He also faced a ban for performance-enhancing drug use.

Somehow, someway, Fury climbed out of that deep, dark hole of despair. Little by little, the weight came off. Soon, the 30-year-old was back in the ring for a fight against an opponent who would present little trouble. One win out of the way.

So when he agreed to fight Deontay Wilder pending yet another victory over a journeymen, the decision was met with surprise. Was Fury ready for such an assignment so soon? We’re about to find out Saturday if he still resembles the man who befuddled Klitschko with angles, awkward movement and mastery of distance.

Fury will discover just how much he has left matched up against perhaps the most lethal puncher in boxing.

“It’s been a long, hard road,” Fury recounted. “I had many obstacles in the way. My absence from the ring has been well documented, but it’s made me stronger and more determined. I’ve never been as happy during a training camp as I was in this one.”

“The fire in me has been lit again,” he added. “Nothing in life was given to me. I’ve worked for everything I earned. I am the people’s champion and I am the man who gives the people hope. I’m not just fighting for myself. I’m fighting for the millions of people around the world who look to me for inspiration.”

Fury could have some rust to knock off on fight night, but his confidence is buoyed by his fitness level entering the fight. He needs to lose between 80 and 100 pounds. For his triumph over Klitsckho, Fury was forced to lose 120 pounds.

“This is the first time in me whole career where I didn’t have to worry about weight and it wasn’t a fat-loss camp,” said Fury, The Ring’s No. 7 heavyweight.

“This time it’s been about focusing, practicing me game, working on me game plans. Working on strength and conditioning rather just losing weight. … No one’s ever seen the best of Tyson Fury because I’ve always had to lose a man before I even fight.”

Fury is heading into the biggest fight of his career — but not his life. He’s already won that battle just to get here. Still, Fury isn’t content to simply be fighting for the heavyweight championship again. He needs fulfillment. He needs a victory Saturday, and a convincing one at that.

If you ask him, there’s no way a fighter of Wilder’s ilk can beat him. Not a man who recklessly throws punches in hopes of one equalizer. No, Fury says he’s far too skilled of a boxer to be beaten by someone like that.

The moment is almost here.

On Saturday night, I’m going to finally get my chance to punch him in the face. Deontay Wilder is getting knocked out,” Fury said. “I’m born to do this. Deontay Wilder can’t beat me. I’m the best heavyweight alive, and there’s only one way to get that title. You have to come take it from me. There’s never been a man who could better me in a fight.”

No matter what transpires in the ring, Fury already has scored a KO in his biggest battle.