Deontay Wilder, Tyson Fury antsy to put hands on one another following months of hype 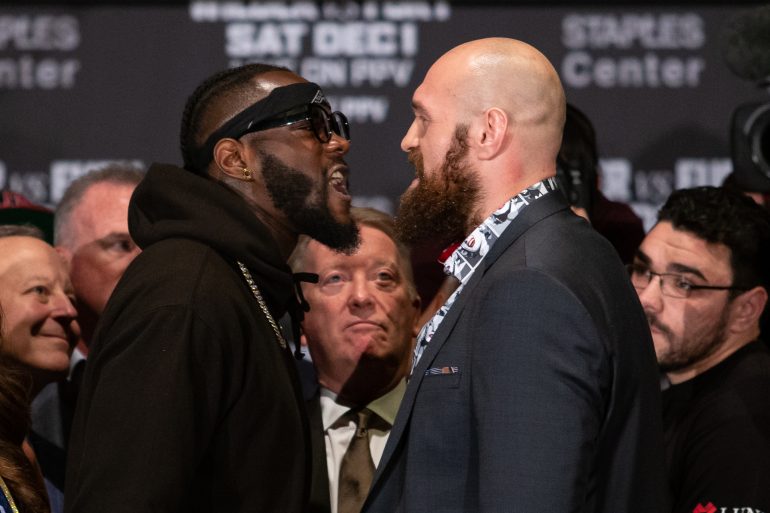 LOS ANGELES — When they first met almost two months ago, Deontay Wilder and Tyson Fury hurled plenty of barbs at one another, but when pressed, admitted they were fond of one another.

“I don’t like him. I love him,” Fury said of his future foe.

Fast forward to Wednesday, three days before the pair meet for the heavyweight championship. It was apparent the love is gone. Tensions flared during the news conference at the Westin Bonaventure Hotel, just as they did during the initial presser to formally announce the fight. The behemoth both possesses bombastic personalities; they also have a Showtime pay-per-view to promote Saturday at Staples Center.

It was clear, though, that they’re ready to dispense with words and prove which one of them will lay claim to the heavyweight throne currently occupied with Anthony Joshua.

Wilder and Fury screamed at one another repeatedly during the festivities, but it was one statement that really seemed to rub the Brit the wrong way.

Wilder (40-0, 39 knockouts) opined that Fury’s signature victory, the one that made him the lineal champion and began his downward spiral into depression, wasn’t really a great accomplishment at all. The WBC titleholder insisted that no, Fury didn’t do much to defeat Wladimir Klitschko. Rather, Wilder said, the future hall of famer beat himself.

That assertion set Fury (27-0, 19 KOs) off. He stood up from his table and became even more animated as he yelled across the stage. When the fighters later posted for the face-off, Wilder snarled: “I’m going to knock you out, motherfucker. I promise you.” Fury ripped off his black jacket and colorful shirt setting off a fracas that eventually was broken up.

Yes, events like this are the norm ahead of a big pay-per-view bout, but with so much riding on Saturday, each man is clearly sensing the moment.

“Wilder needs me, let’s make no mistake about this matter,” Fury, The Ring’s No. 7 heavyweight, deadpanned. “He’s been a WBC champion since 2015. He’s made seven defenses of his world title but he’s still unknown in this country. So what do they need to do? Bring in the big Brit, the best fighter in the world, and let Wilder get his ass kicked.

“So on Saturday night, the whole world will know Wilder as the person Tyson Fury just knocked out. … I’m going to punch his face right in. I see a lot of people saying Wilder by knockout; Fury on points. And I’m telling you right now: Wilder is getting knocked out by me on Saturday night.”

Wilder laughed at the bold proclamation. After all, journeyman heavyweight Francesco Pianeta lasted the distance with Fury in August, Wilder pointed out.

Fury climbed out of the deep, dark hole of depression just to return to this stage. The 30-year-old ballooned to nearly 400 pounds after he outpointed Klitschko. He battled cocaine addiction and a hellacious battle with his own psyche.

The Alabaman can’t be bothered with any of Fury’s triumphs out of the ring. He’s patiently waited for a crack at a marquee fight. After drawn-out negotiations with Joshua, nothing came to fruition. But the opportunity with Fury presented itself, and at 33 years old, finally, Wilder is fighting on the biggest stage.

“This is a moment I’ve been waiting for my entire career,” he said. “This is my time. Fury had his time. When he beat Klitschko, that was his window to do what he had to do. … That was up to him. We can’t fault him for having a little fun in his life. He deserved it. But now, it’s my time.”