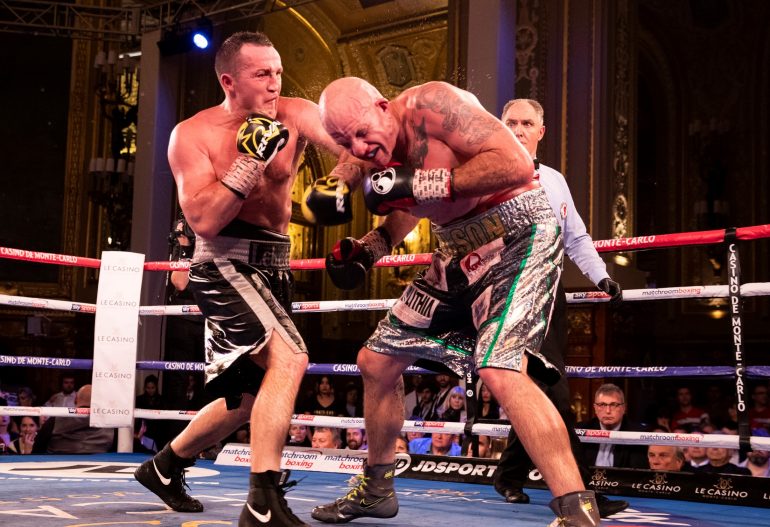 The WBA cruiserweight champion in recess is back.

Oh, let’s not even go there.

Russian southpaw Denis Lebedev scored a drab and listless 12-round unanimous decision over the previously unbeaten Mike Wilson at the Casino de Monte Carlo in Monaco on Saturday. The official scores were 119-109 twice and 117-111.

Lebedev, who is rated No. 5 by The Ring at 200 pounds, had everything his own way from the opening bell against what he knew was an inferior opponent. Wilson, who hails from Anaheim, California, and now lives in Oregon, was brave but terribly limited.

“I will give myself four out of five,” said Lebedev, who flattered himself during his post-fight interview with Sky Sports in the U.K. “I did everything my coach said and I’m happy with my performance.”

In truth the fight was dreadful, but Lebedev did display his class intermittently. The former champion drew leads from Wilson and countered effectively with single shots and sharp combinations. The bout was just one-paced and devoid of excitement.

Both men were dripping blood from the early rounds, but the facial damage did not reflect the action. Every round was the same and it was a relief when the bell rang to end the tedium.

The 39-year-old Lebedev (32-2, 23 knockouts) still wants big fights, however, and insists that he would like to challenge himself against the only champion at 200 pounds.

“There are a lot of fighters in my weight division who want to fight (Aleksandr) Usyk and I am one of them,” said Lebedev. “I look forward to the WBA’s resolution, and I hope my side and Usyk’s side can make it happen.”

Usyk is unlikely to weigh in on or below the 200-pound limit again in his career, and for Lebedev’s sake, let’s hope he doesn’t.

Hunter, giving away almost 70 pounds, punished his man heavily from the opening bell and the action was disconcerting long before the colossal Russian was decked by a combination in the eighth. He bravely got to his feet but was nailed by a huge left hook at the bell and staggered all over the ring in an attempt to find his corner.

It was a brave referee and a brave corner team who allowed him to come out for the ninth and Hunter predictably ended matters with another two-fisted barrage.