Denis Lebedev: ‘Everything Mike WIlson does well, we did our homework and we can counter’ 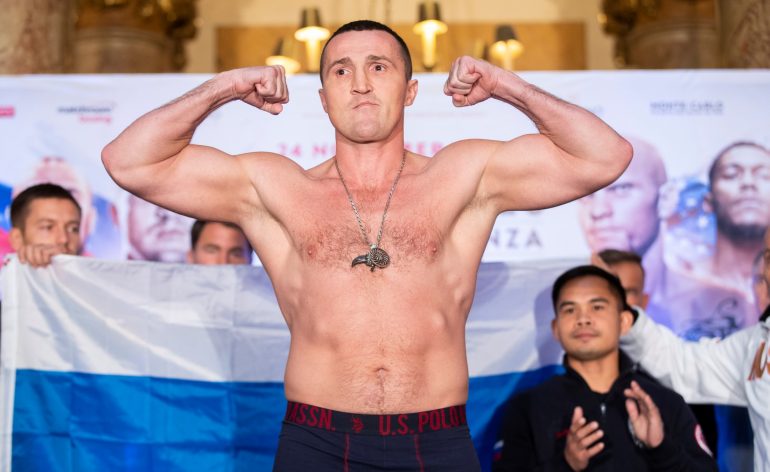 Hard-hitting southpaw Denis Lebedev will face Mike Wilson in a scheduled 12-round cruiserweight fight at the Casino de Monte Carlo Salle Medecin in Monaco on Saturday.

Lebedev, who is rated No. 5 by The Ring at 200 pounds, isn’t thinking about his unbeaten American opponent, preferring to focus on his own preparation.

“All I think about is making weight,” Lebedev (31-2, 23 knockouts) told The Ring through Oleg Kovalchuk. “This is the most important time to make it go smooth, eat what I need to eat, cut my weight, do final exercises. What’s going to happen in the fight, everybody will see November 24.”

However, the 39-year-old veteran is respectful of his Oregon-based opponent’s abilities.

“I think Wilson is a good fighter, he’s not bad at using his jab, he’s not bad at going forward and attacking,” said the Russian powerhouse. “Everything he does well, we did our homework and we can counter. I think the fighter who is going to follow his plan will win and I hope it’s me.”

Wilson won two national titles as an amateur and represented his country at the 2005 World Championships. The 35-year-old turned professional in 2009 and has won all 19 fights, eight by knockout. Lebedev, however, is a significant step up in class.

Lebedev returned to the ring in September with a routine third-round stoppage over Hizni Altunkaya. He had been inactive for 14 months, mourning the passing of his mother.

“It was a very difficult loss for me,” Lebedev said. “I needed to take time to think about my career, my life, my family. Honestly, I haven’t thought about my career, but then I realized I have to continue and I fought my last fight.

Despite all his experience, Lebedev admits to having some trepidation about returning to boxing.

“I feel a little bit nervous because of the audience, it’s been a while since I performed in front of a big audience in a big arena,” he said. “Once I step into the ring it goes away, I feel stronger and I’m ready to move forward.”

This bout, as well as a world title fight between WBA junior bantamweight champion Kal Yafai and challenger Israel Gonzalez, will be televised on Sky Sports Arena in the U.K. and DAZN in the U.S.