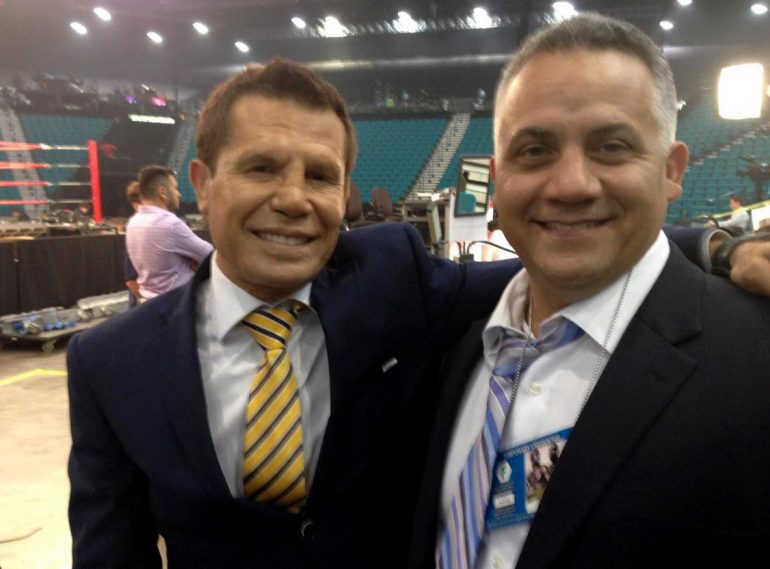 Felix DeJesus’ job description as Showtime’s translator can be summed up like this: He assists in telling the story behind the fight.

“There is no boxing dictionary that includes certain dialects from different countries. So, you make sure you ask trainers, the people in the boxer’s corner, people from that country, if there is a word that is not common or means something different to them,” said the 53-year-old New York native of Dominican descent.

DeJesus’ formal employment began 12 years ago. He must have struck a chord with someone up top, because his career was co-signed by a professional colleague.

“Back in 2006, through the recommendation of (TV director) Victor Gonzalez, Showtime gave me the opportunity. And the rest is history,” said DeJesus.

To ensure that nothing is lost in translation, DeJesus did a lot more to distinguish himself, as opposed to just being another bilingual individual in such a large pool of potential candidates that applied for the gig.

“Throughout my television and radio career, we would always cover the big fights,” DeJesus said. “I also did a few shows for Fox Deportes as a color commentator. I have two of my own shows on ESPN Deportes, “El Mundo de las Grandes Ligas” (The World of the Major Leagues) and “Impact,” which is the first bilingual show in New York City. And I am part of the (New York) Yankees broadcast.”

Gonzalez’s endorsement wasn’t because they were friends. Boxing is an acquired taste – you have to understand it to truly appreciate it. And as we have come to know, “industry people” in the sport of boxing are fans of the sport with unique backstories.

“As a native New Yorker, back in the early 1980s, I recall a lot of excitement going on with the first Duran-Leonard fight, and I guess since then, I have been following it,” DeJesus said. “There were also some great Mike Tyson fights that would unite family and friends. Boxing was and still is a big event when good fights are made.”

DeJesus shared some of his earliest and fondest memories of the sport that he was exposed to as a youngster that fueled his passion to be involved in the sport.

“Some of the Muhammad Ali fights that were free on T.V.,” DeJesus recalled. “(George) Foreman, (Joe) Frazier, mainly the heavyweights.”

While continuing his journey down memory lane, he also shared what was his first exposure to both the English and Spanish languages.

“Well, my mother was a teacher, both in the Dominican Republic and New York City,” DeJesus recalled. “And she made it a priority for me to learn both languages. I can also speak high school level French, too.”

Outside of the teacher component, most Latinos would concur that the aforementioned scenario is common. And as a result, many Latino children end up doing a lot of translating, especially for their grandparents.

So you can say that his training in the business started at an early age.

“You can only prepare so much,” DeJesus says jokingly. “Actually, that’s the fun part, when you don’t know what the boxer might say and the adrenaline gets going.”

More often than not, improvisation is an integral part of the script. It’s an unwritten rule the audience tends to overlook, and it contributes to the difficulty of the job. 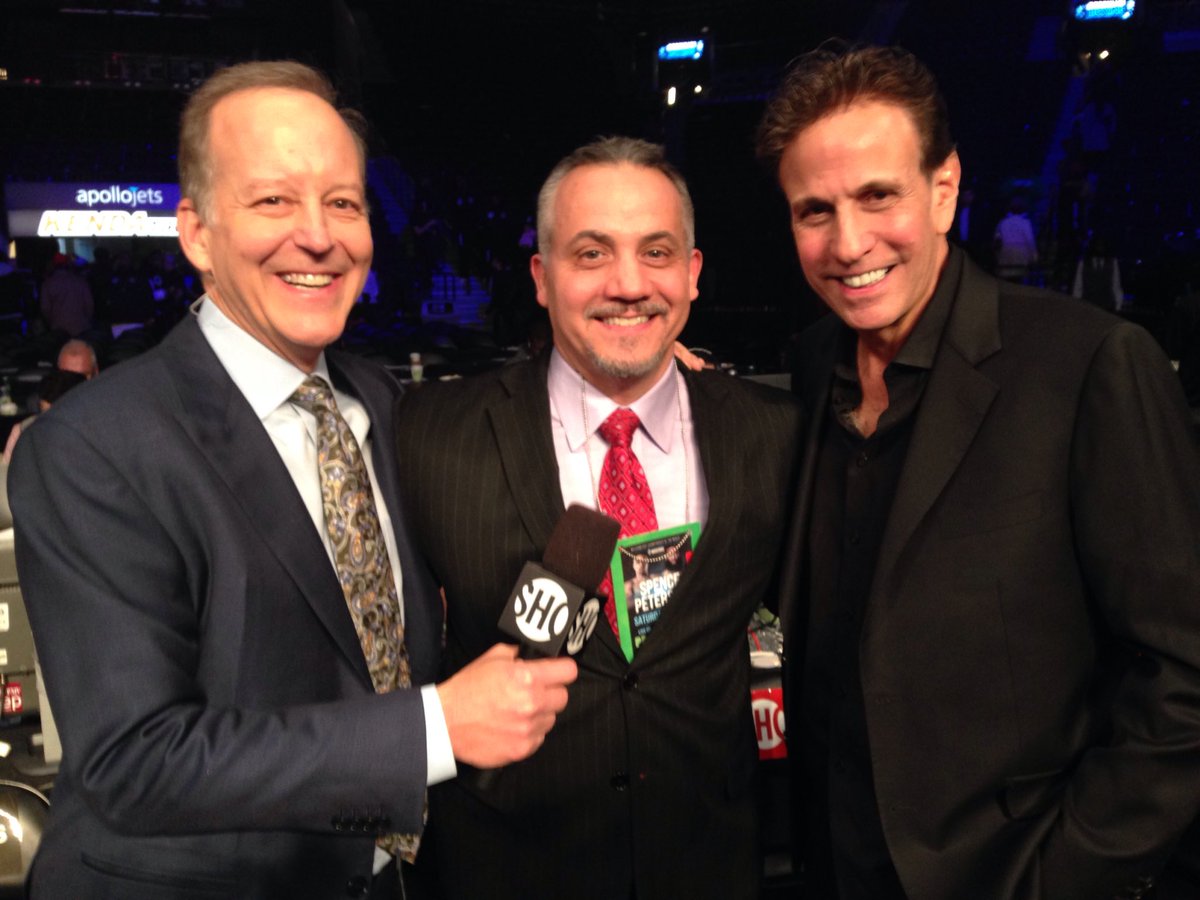 “It depends,” DeJesus said, when asked to assess the struggles of his occupation. “Sometimes there are boxers or ball players that are concise, and that makes it easy. But sometimes you get athletes that give convoluted or tangential answers to interview questions, and then it becomes difficult, especially when trying to keep within allotted timeframes.”

So if the allotted time frame is of great significance to the telecast, then clearly each word that the fighter is saying isn’t translated verbatim. In some instances, there are particular cultural expressions and idioms that may not be understood even by members of other Latino ethnic groups.

“There are subtle differences between the English and Spanish languages,” DeJesus expressed. “I feel I owe the English speakers exactly what the fighter meant. Most of the time, I will have to try to find out or ask the fighter ahead of time.”

Then there are times in which the spectators and the viewers at home will hear either the trainer or the fighter utter an expletive in between rounds or in a post-fight interview. It is evident that DeJesus has a professional obligation to relay what was just said. But what’s the compromise? Is there a comparable trade-off in this particular situation while maintaining one’s integrity?

“We [translators/interpreters] try to find words that will relay the same message,” DeJesus claimed.

Adjusting and adapting is critical. It’s the equivalent of calling an audible at the line of scrimmage. This is in line with the “sweet science” because it is the theater of the unexpected. Other translators, such as Ray Torres and Jerry Olaya, have utilized other unconventional methods when handling these specific circumstances. As long as the encompassing goal is the same, is there a right or wrong answer when tackling this issue?

“I’ve worked with Jerry at ESPN Deportes TV and I have seen Ray’s work,” DeJesus told The Ring. “But I’ve never compared styles. We all just try to get out the best translation possible.”

Pride, ego and stubbornness can lead a fighter to think that he may not require the assistance of a translator. It’s nice to give the fighter credit for taking the initiative to speak English, but if the individual lacks a solid command of the tongue, it defeats the purpose of DeJesus being there. A famous example of this blunder was when Alfredo Angulo, in his loss to Canelo Alvarez, conducted a post-fight interview in English without the backing of a native English speaker.

“That hasn’t happened to me, but if he is speaking English and he has a problem with a word, we are just by his side to translate quickly,” DeJesus said.

“But I would encourage a fighter to proceed with an interview, assuming that I am confident in their ability to speak English.”

This is a testament to his upbringing by an educator. DeJesus is a facilitator when it comes to communicating, so that everyone gets a full photo montage as opposed to a mere snapshot.

More often than not, DeJesus’ professional responsibilities consist of translating from Spanish to English. Does he ever do the opposite?

“Yes, on my radio show, when our guests are only English-speaking and I need to translate for a Spanish audience,” DeJesus said.

But when it comes to telling the story behind the fight, as it pertains to DeJesus, rest assured that nothing is ever lost in translation.