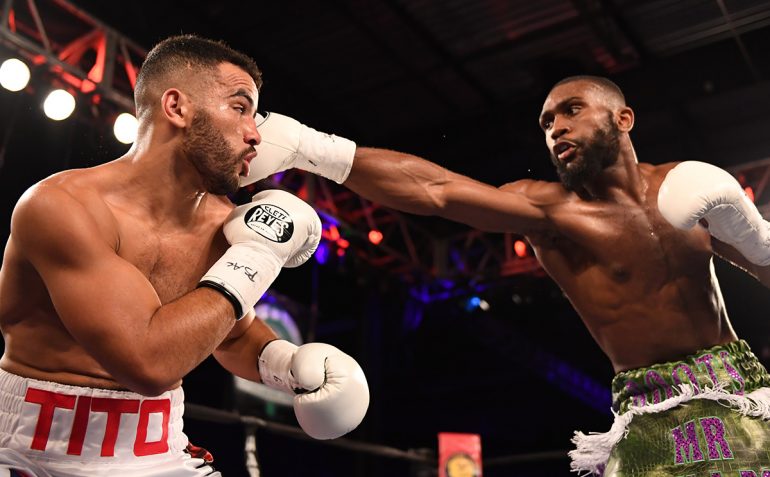 PHILADELPHIA — The little kid has grown up. He’s tall, and lean, and fast, and quick, and steadily rising into a superstar.

No, Jaron “Boots” Ennis is no longer that nuisance that whirled around like a tornado through his daddy’s gym, or at least the way Ray “Tito” Serrano may have remembered him when he used to train with Boots’ older brother, Derek “Pooh” Ennis, early in his pro career.

Boots is even more destructive.

Ennis dropped his fellow Philly fighter three times in the second round and referee Gary Rosato was quick to wave it over at 1:12 on Friday night on Showtime’s ShoBox: The New Generation in a scheduled 10-round main event at Philadelphia’s 2300 Arena, promoted by a rising company in Philadelphia, Hard Hitting Promotions. 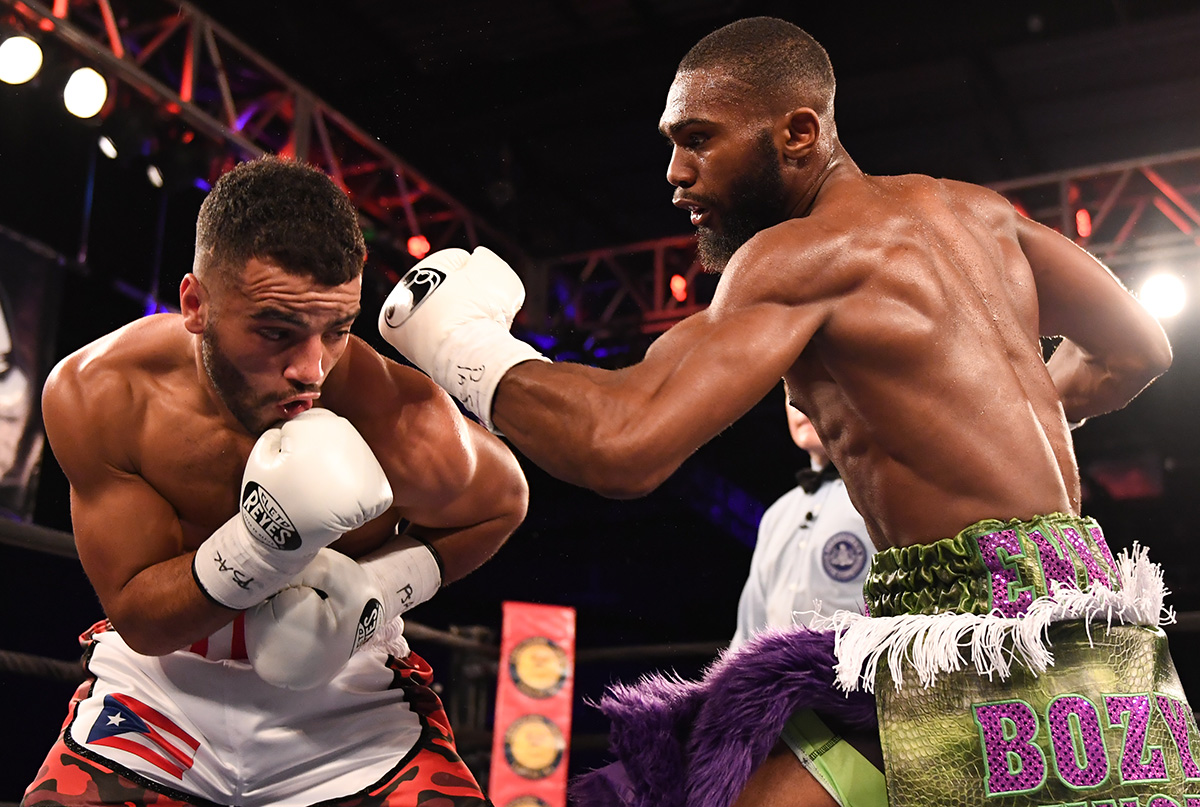 It marked Ennis’ 12th straight victory within the distance to improve to 22-0 (20 knockouts), while Serrano (24-6, 10 KOs) lost for the second-straight time, interrupted by a no-contest in his last fight.

“I’m hoping to be back at the end of January or the beginning of February. I made 147 easy and I’m getting my man strength now. I told everyone was going out there and have some fun. I knew it was going to be early. I knew he couldn’t take my power.

“My dad gave me that look. I knew what to do in the second round.”

Ennis knocked Serrano down the first time with a right hook, and the second knockdown came off a right hand. Another right hand ended it and Rosato knew quickly to wave it over.

“Continue to keep watching me, and watching me grow as a fighter,” Ennis said. “I feel like it’s time to shine and let the world know who I am.”

Derek “Bozy” Ennis, Boots’ father, trainer and manager, put out the challenge to anyone at 147.

“We’ll fight anybody at 147, even Danny Garcia, who’s my man, though, if it’s meant to happen,” Bozy said. “That’s the only reason why we would fight Danny, because, otherwise, Danny is family. I knew this wouldn’t last that long and that’s what happened.

“Serrano told me he didn’t know Boots was that strong.”

Samuel Teah knows why he was picked to fight Kenneth Sims Jr. (13-2-1, 4 KOs) on the co-feature of the ShoBox show. “The Tsunami” knew he wasn’t supposed to be the one who won.

He was expected to force Sims into some tough spots, nothing more.

He looked good from start to finish in a scheduled junior welterweight eight-rounder and pulled off a mild upset by winning a unanimous decision. 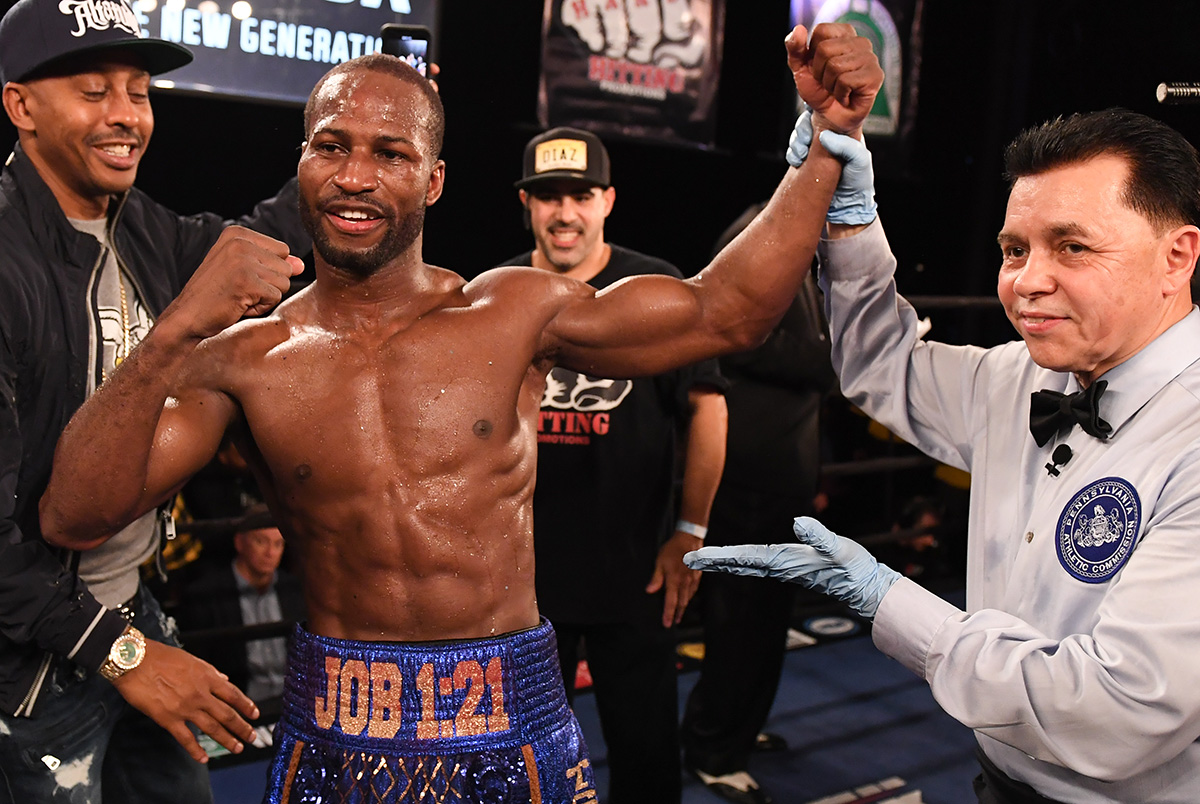 In the beginning, both fighters weren’t willing to give up any ground, often leaning on each other and exchanging at close range. Teah won the first round and seemed to have Sims in some trouble in the second, but Sims survived.

In the third, Teah had Sims backing up again. Sims changed from an orthodox stance to southpaw, and still it didn’t deter Teah from coming at him. Sims, however, did begin using distance in his favor, and was smart enough to use his reach and height at the outset of the fourth.

Still, Teah managed to get inside and poke away at the former amateur star. After four, it would have been easy to see Teah up 3-1.

After six, it appeared Teah was in control. Sims rallied to have a solid seventh, again establishing a good distance and pecking away. When Sims did connect, Teah walked right through it. There was no sense of urgency from Sims, who may have assumed he was winning.

“I trained differently, I made a sacrifice, I trained away from home, I ate right, and very minimal sparring,” Teah said. “I felt fresh; I thought I looked fresher. I could have fought four more rounds. I knew he didn’t have the same pace that I had for all eight rounds.

“I knew this would be my biggest stage. This is my best performance as a pro. The plan is to have bigger opportunities in 2019. Whatever is up next, I want it. I want bigger, better fights. I deserve it. I want 10-round fights. My legs feel fresh.”

In the first TV fight, junior featherweight Arnold Khegai (14-0-1, 9 KOs) looked very good against the very game Jorge Diaz (19-6-1, 10 KOs). In the fifth round, however, Khegai, from Odessa, Ukraine, had a cut over his left eye. That didn’t deter him from continuing to come at Diaz.

Khegai was quick, powerful and aggressive. But the cut was causing bigger problems in the sixth. Blood began trickling down the left side of Khegai’s face, which seemed to spur him on even more. A left-right combination dropped Diaz for the first and only time in the fight, even though Diaz seemed to find any excuse to land on the canvas.

Smelling his own blood, Khegai went on the attack in the seventh and eighth, backing up Diaz, who was down a total of eight times for various reasons, including the sixth-round knockdown.

In the end, there was no question who won — and who may warrant more attention in the future: Khegai, who left no doubt on the scorecards, winning 79-72 and 77-74 twice. The Ring agreed far more with the 79-72 tally.

In a featured undercard fight, local favorite Brandon Pizarro (13-1, 6 KOs) won a unanimous six-round junior welterweight decision over Jerome Rodriguez (7-11-3, 2 KOs). Pizarro, 19, did take some punishment, popped a few times in the face, which caused a welt to form under his left eye.