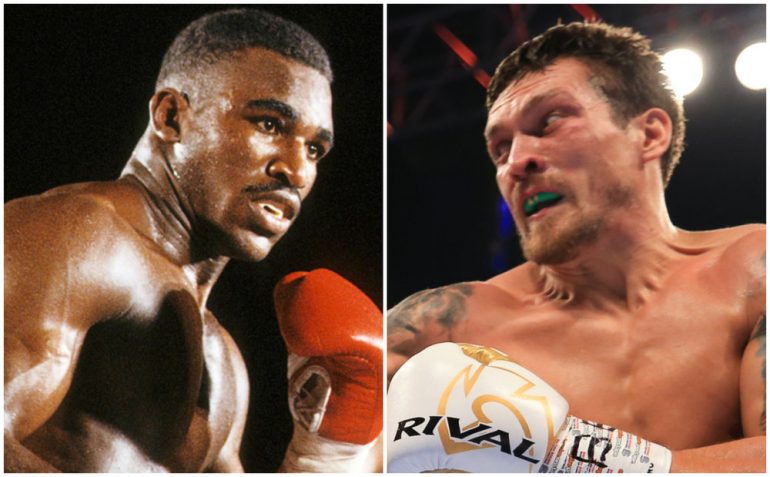 Editor’s Note: This feature appeared in the November 2018 issue of Ring Magazine

THREE EXPERTS – A FIGHTER, A TRAINER AND A MEDIA MEMBER – TELL YOU HOW A MYTHICAL MATCHUP WOULD PLAY OUT

A clash between undisputed champions in the same division is obviously impossible – unless of course it’s a fantasy fight.

The cruiserweight version of Holyfield and Usyk share other similarities. Both are almost identical in terms of height and reach. Both were Olympic medalists. Both men achieved cruiserweight dominance with unbeaten records. However, the fighting styles are vastly different. Holyfield was a cerebral boxer-puncher who relished a tear-up, whereas Usyk is a mobile southpaw who exemplifies the “hit and don’t be hit” philosophy.

The consensus among fans and experts is that Holyfield is the greatest cruiserweight of all time. Does Usyk challenge that supremacy, or would “The Real Deal” have had too much for today’s undisputed king? 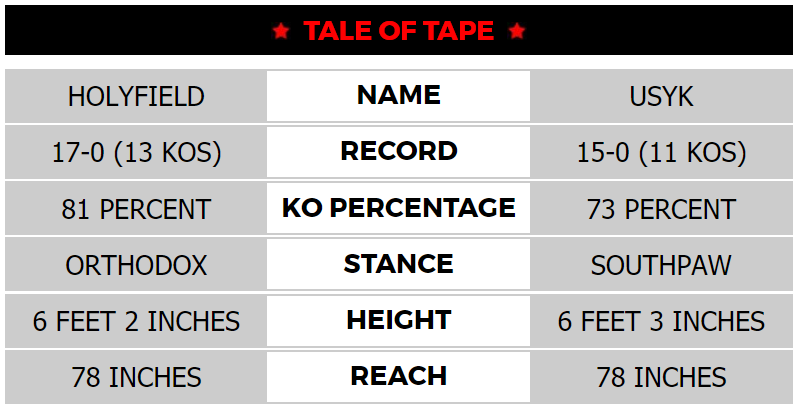 Usyk’s confidence is not 100 percent at this point, but even at the 80 percent he’s at, he’s good enough to beat everybody around. He’s tall, he’s southpaw, he’s rangy, he’s mobile. I once saw him spar with Wladimir Klitschko and they kicked him out of the gym after one round because he was making Wladimir look bad. I remember saying to myself, ‘Shit! Who the hell is that?’ I knew then that he was going to be world champion. I also picked him to win the World Boxing Super Series when it was announced, because nobody in the division has that talent. It was the same with Holyfield; he obliterated the entire cruiserweight division and had to move up to heavyweight. His style was totally different to Usyk’s; it was offense and defense, but he had it down to a T. His basics were exceptional and he put everything together at cruiserweight. From what we’ve seen of Usyk and what we know of Holyfield at cruiserweight, I would have to pick Holyfield to win that fight. It’s not just about ability, it’s about character. Holyfield is one of these fighters who could be getting beat for 11-and-a-half rounds and he still thinks he’s gonna beat you. When you hit him, he’d come right back at you with everything he had. He was the whole package: dangerous, compact and just an all-around fighter.

Just before Usyk turned pro, Tony (Bellew) told me it was nailed-on for this guy to become a fantastic fighter. Now, he looked unbelievable against Gassiev, but that style was made to order. Usyk was getting hit in previous fights, but Gassiev, as good a puncher as he is, was too slow, too predictable and too limited in terms of punch selection. One of Usyk’s best assets is his lead hand – he uses it in defense, he uses it in offense, he uses it set up attacks, he uses it to measure. He also has an incredible engine for a man of his size. His speed and punch output is incredible. Holyfield had great shot selection, his combination punching was fantastic and his intelligence was underrated. He had the same kind of heart which he showed at heavyweight in later years, but Holyfield also had quickness, athleticism and good feet as a cruiserweight. He could definitely match Usyk in terms of his engine, because it’s one thing to have that engine when everything is going your way, but Holyfield proved that he had the engine in a competitive 15-round fight (against Qawi). That is remarkable. It’s a very hard fight to pick, because Holyfield struggled against southpaws. In the first (Michael) Moorer fight, he encountered a lot of problems. At cruiserweight, I just think he would find a way to win.

Usyk-Holyfield would match two complete talents with deep amateur experience and a similar early depth of professional experience. Usyk impressed in the WBSS, displaying poise in three straight road wins. Along with that poise, the southpaw exhibited intelligent volume, an expert jab, agility, and physical strength. The last of those would be important against Holyfield, who was naturally a hair smaller than Usyk. Holyfield at cruiserweight remains the gold standard – the first man to make the class relevant. Holyfield was also a volume puncher but with advantages in finishing ability, speed and fluidity. Only Qawi lasted the distance with Holyfield in a cruiserweight title fight. When he finished his unification of the division with a knockout of DeLeon, it was the sixth of 13 straight stoppages that ultimately carried Holyfield to the heavyweight title. This version of Holyfield was a dangerous man. A fight with Usyk would likely play out with Usyk boxing more at range and Holyfield pressing smartly, on his toes and behind the jab. Holyfield would have issues early with the southpaw length of Usyk and could always be troubled by a good jab. Usyk’s uppercut would also be a problem. They just wouldn’t be as big a problem as Holyfield’s inside game, left hook, counter right and harder combinations. Holyfield might not stop Usyk, but he’d outwork him – and with meaner effect on his shots. The pick is Holyfield by decision.