Aleksandr Usyk primed for Tony Bellew encounter: ‘It is difficult to hit something that disappears’ 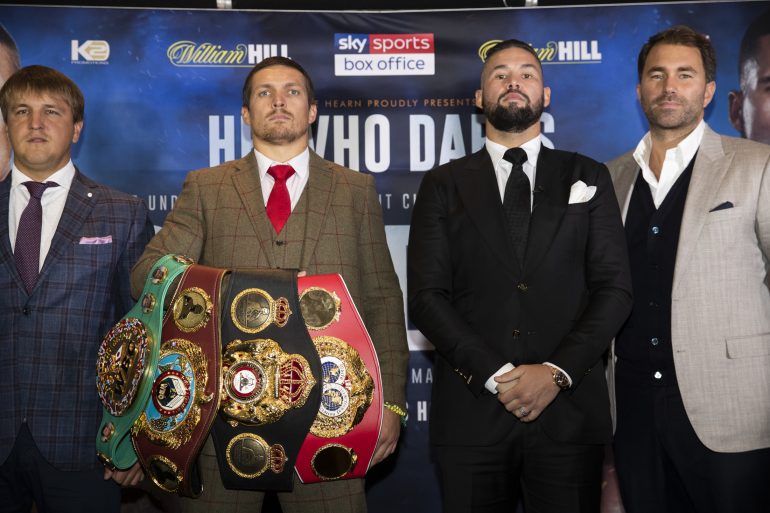 The supremely talented Aleksandr Usyk will put his Ring, WBA, WBC, IBF and WBO cruiserweight championships on the line against former titleholder Tony Bellew in an eagerly anticipated showdown at the Manchester Arena in Manchester, England, on Saturday.

Usyk (15-0, 11 knockouts) is accustomed to traveling for combat, as this bout will mark the fifth consecutive time the Ukrainian pound-for-pound entrant has fought on enemy territory. The 31-year-old southpaw bested Michael Hunter in America, Marco Huck in Germany, Mairis Breidis in Latvia and, most recently, secured undisputed status by defeating Murat Gassiev in Russia.

“It does not matter to me where I fight,” Usyk told The Ring through Yulia Diachenko of K2 Promotions, Ukraine. “A ring is a ring everywhere. It also motivates me to prove to the spectators that I can be successful even if the vast majority of them are rooting for my opponent.

“But, honestly, I feel at home everywhere, knowing that thousands of fans are traveling to my fights and millions are supporting me in front of the TV back in my lovely Ukraine. I can feel their love and that makes me that much stronger.”

Prior to turning professional in November 2013, Usyk was a standout on the amateur scene and part of the prolific Ukrainian “Dream Team” at the 2012 London Olympics, where he took gold.

His professional ascent has been remarkable. In just his 10th fight, Usyk won the WBO 200-pound title by outboxing Krzysztof Glowacki over 12 rounds. Five fights, and three world titles later, he’s rated No. 5 pound-for-pound by The Ring.

However, despite that overwhelming success, Usyk is fully focused on the task at hand.

“I am working extremely hard to get prepared to step into the ring against Bellew,” said the undisputed champion. “I am in camp for long months. We know that Bellew is a top competitor, and that makes me work extremely hard to prove to the whole world that I am still the best cruiserweight on the planet.

“Tony is a pretty good boxer and a true warrior. He may look like a brawler from the outside, but he knows a lot about the science in the sport: positioning, rhythm, countering, it is all there. He is also very strong on the mental part. He proved it when he won the WBC cruiserweight title (KO 3 Ilunga Makabu) where he got dropped early on but came back stronger. He showed this against [David] Haye when nobody believed he’d win but himself.

“I respect him very much and would never underestimate him. I just believe that I am a better fighter overall and my goal is to prove it in front of his own fans.”

Bellew, who turns 36 in late November, is on a 10-fight unbeaten streak. The former two-time light heavyweight title challenger moved up to cruiserweight in 2014 and improved his game dramatically under the tutelage of distinguished coach Dave Coldwell.

However, Usyk has played the fight out in his mind many times and always envisions the same outcome.

“I prepare myself for a long and hard bout,” he explained. “I visualize it as a tough fight, both technically and physically. Bellew has a strong soul and he never stops coming.

“But it is difficult to hit something that disappears. My idol is Muhammad Ali and I love the way he fought. His movement was art. I will use my legs to get out of danger and make my Ukrainian fans happy in victory.”

“The Bellew fight is a tremendous chance for Aleksandr to solidly build up his profile in the U.K., as well as in the whole world,” said Krassyuk. “Tony Bellew has proved many times that being an underdog does not mean being a loser.

“I am far from the idea that this will be an easy fight for Usyk. But he has done terrific work at his training camp. He deserves the victory, but Tony thinks differently. I look forward to November 10, which I consider will become the Fight of the Year.”

The bout will be shown live on Sky Box Office in the U.K. and DAZN in the U.S.