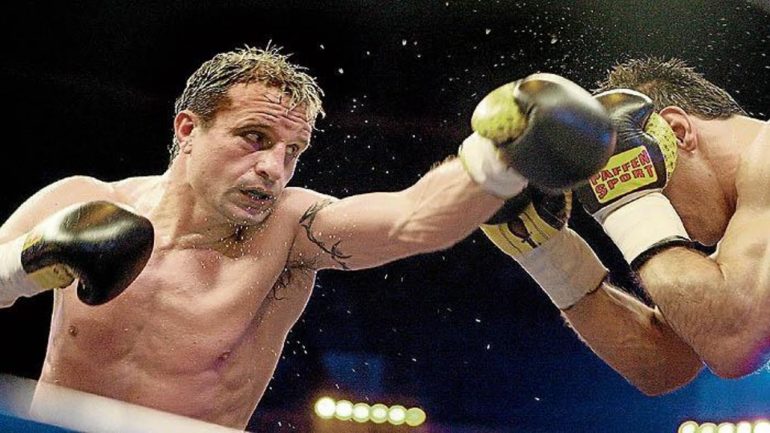 Castillejo (left) goes after Felix Sturm in their 2007 rematch.
29
Oct
by Anson Wainwright

On account of being the only Spanish-born fighter to become a two-weight world champion, Javier Castillejo will be remembered as one of the best boxers in his country’s history.

Castillejo was born in Parla, a suburb of capital city Madrid, Spain, on March 22, 1968. He is from a working class family and was brought up during the Francisco Franco dictatorship. His family moved to Frankfurt, Germany, when he was very young and lived there from 1972 until 1979.

“I was not good in school,” Castillejo told The Ring through Oscar Zardain. “I started to work as a construction worker and painter. The 1970s and 80s were hard years.”

The youngster initially practiced karate before switching to boxing at 15. Castillejo would continue in the sport until he completed military service at 20. His amateur record was a modest 25-5 when he elected to turn professional in July 1988.

In the first five years of his career, Castillejo won 28 of 29 fights, all in Spain. The lone blemish came early at the hands of capable British journeyman Del Bryan.

In April 1993, Julio Cesar Vasquez brought his WBA junior middleweight title to Spain and successfully defended against Castillejo. The Argentinean retained his belt via close but unanimous decision.

“El Lince de Parla” (The Lynx of Parla) rebounded to win the European title in France in early 1994. He made four defenses before losing to Laurent Boudouani by ninth-round stoppage. The two fought again a year later, and this time Boudouani claimed a unanimous decision.

When Boudouani stepped up to world level and knocked out Castillejo’s old rival Vasquez, the Spaniard claimed the vacant European title and plotted his course toward a second world title shot.

That opportunity came in January 1999 when American Keith Mullings was lured to Spain to defend his WBC strap. Castillejo won the title by hard fought majority decision. 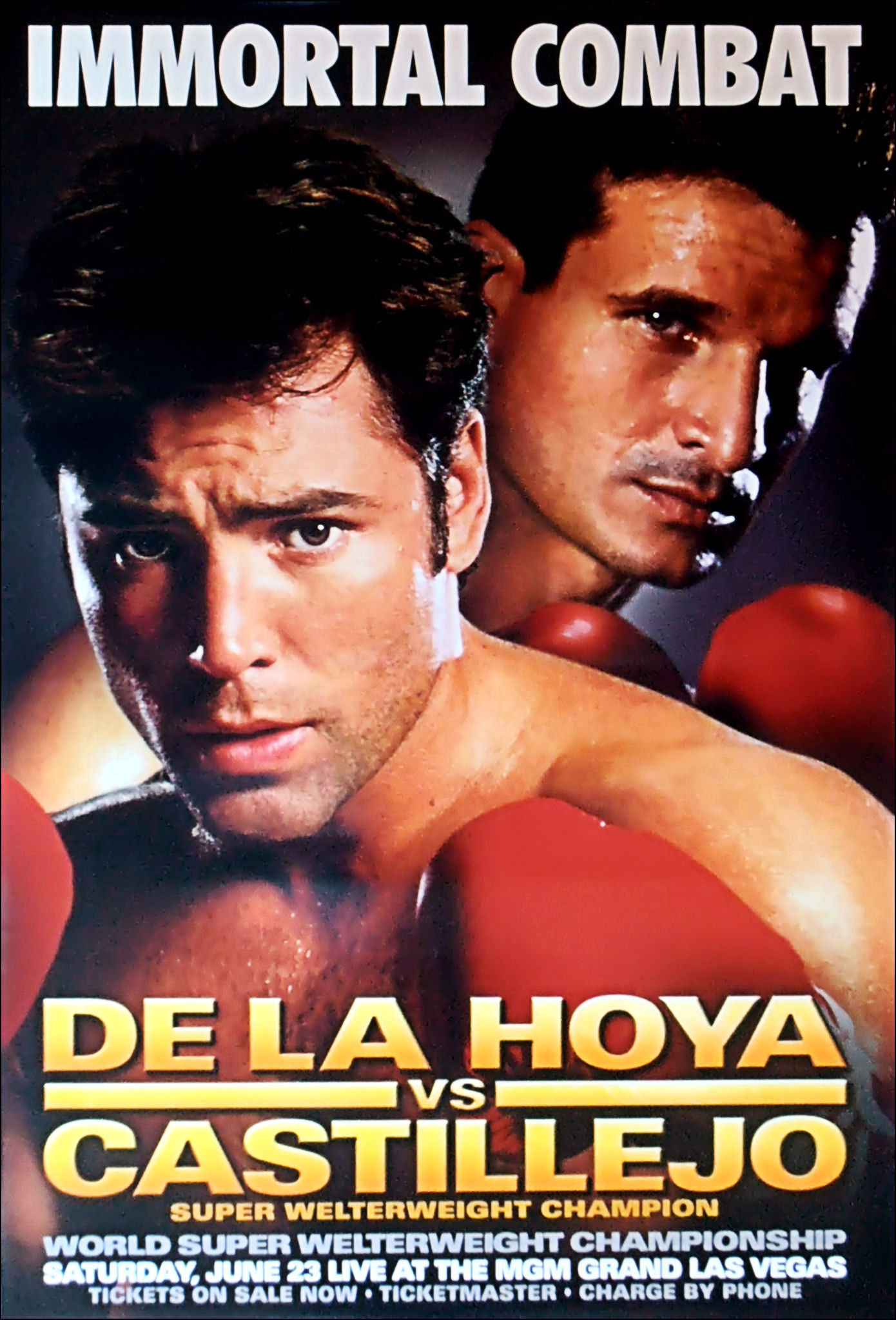 Castillejo successfully defended his title five times before facing Oscar De La Hoya in June 2001 in Las Vegas. It was a huge occasion, and even though Castillejo dropped a wide points decision, it remains a proud moment in his career.

“I felt fulfilled as a boxer and very proud to fight at the MGM [Grand] against a superstar like Oscar De La Hoya, with him as a challenger and me as a world champion,” Castillejo said. “It was something big for my personal history and for my country.”

Over the next couple of years Castillejo stayed active. He impressively halted future world champion Roman Karmarzin’s unbeaten record by unanimous decision before dropping a points verdict to Fernando Vargas in August 2005.

One year later, Castillejo was given a shot at Felix Sturm’s WBA middleweight belt. As a heavy underdog, he managed to drop Sturm in the second round, but the champion recovered and pulled away on the scorecards. With time running out, Castillejo suddenly broke through with a short left hook and a series of uppercuts, forcing a memorable 10th-round stoppage.

“They thought that I was old because I had been world champion a long time ago, but they were clearly wrong,” said Castillejo, who was 38 years old at the time. “I had a lot of boxing inside of me and I wanted to make history. In Spain there had never been a world champion in two different weights and two different organizations.

“I fought for my children and my family. I’ve always wanted to be the best, and I have always been very disciplined and worked very hard to be world champion. Work, discipline, seriousness, consistency, hopes and being humble are the keys to being a real fighter.”

In his first defense, Castillejo was stopped in the 11th round by Mariano Carrera. However, the Argentinean later tested positive for clenbuterol and the fight was changed to a no-contest. Castillejo would be reinstated as champion.

In April 2007, Castillejo fought Sturm in a rematch and this time he dropped a close unanimous decision. Later that year, he stopped Carrera in a title eliminator. While waiting for another world title opportunity, Castillejo faced Sebastian Sylvester for the European title and was stopped in the 12th and final round.

The former two-weight world champion brought the curtain down on a 21-year career after drawing with compatriot Pablo Navascues in April 2009. Castillejo’s final record was 62-8-1 (43 knockouts). 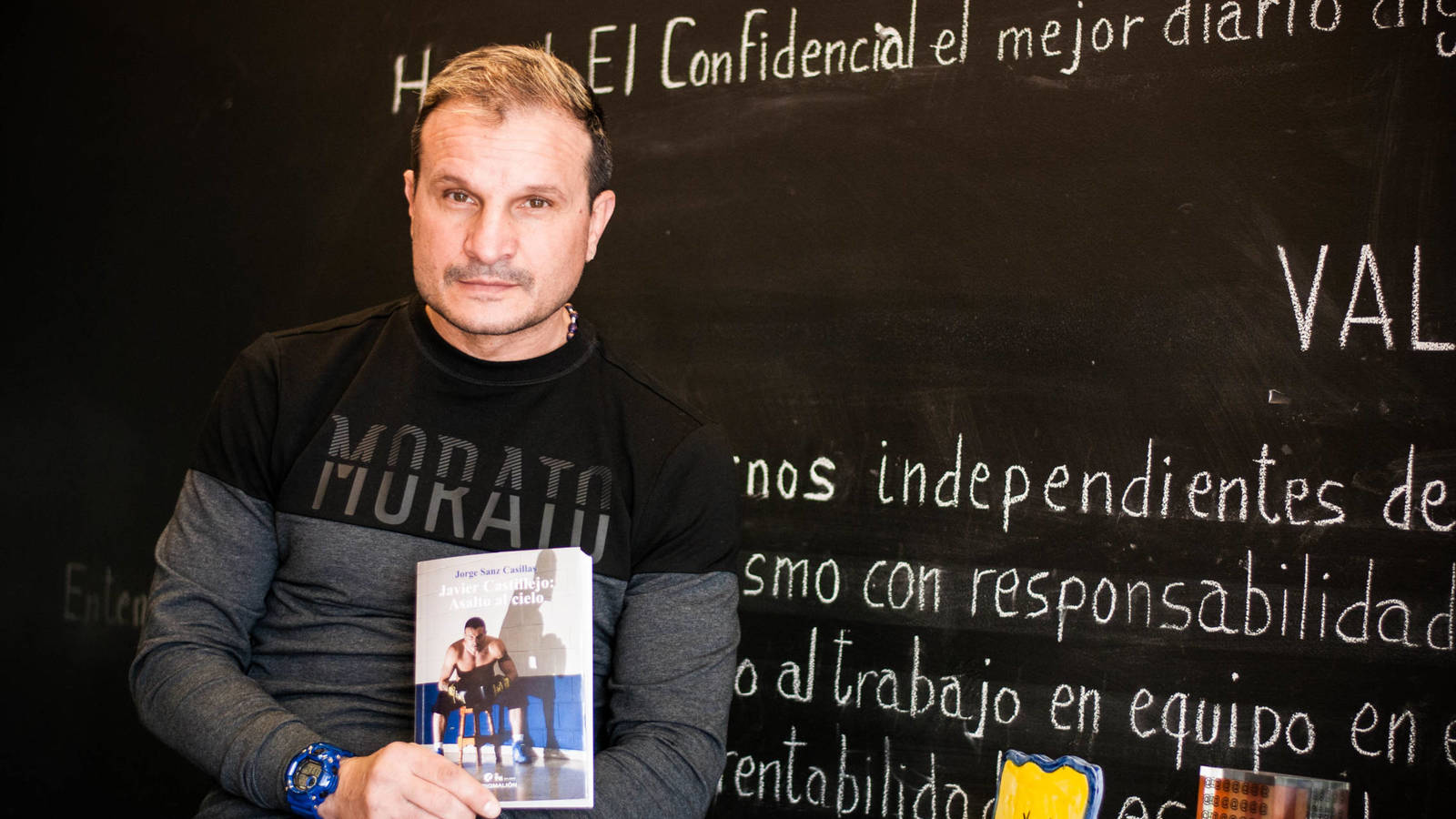 The Spanish boxer-puncher’s two proudest moments come as no surprise.

Castillejo, now 50, is married and has two children. He lives in Parla where he has his own gym, “Escuela De Boxeo Javier Castillejo”, which has produced some top Spanish amateur boxers.

The former champ graciously took time to speak to The Ring about the best he fought in 10 key categories.

FELIX STURM: He had a very fast and had good left jab.

OSCAR DE LA HOYA: It was very difficult to hit him and he did very smart defensive movements also.

BEST CHIN
KEITH MULLINGS: I hit Mullings with my best punches. He had a very good defense with the gloves and the guard too. Also, Fernando Vargas, I broke his jaw in the first half of the fight. He is a very tough guy and fought until the end of the fight and won.

SMARTEST
LAURENT BOUDOUANI: The Frenchman was very intelligent, and he knew what to do in every moment.

STRONGEST
JULIO CESAR VASQUEZ: He was strong like a race horse.

BEST PUNCHER
VASQUEZ: Either Boudouani or Julio César Vasquez. Boudouani was very accurate; he knew the way to hurt the opponent. Vasquez was a beast, very violent. He hurt me a lot of times during the fight. If I had to pick, I would say Vasquez.

Oscar Zardain helped coordinate and translate this feature. THE RING appreciates his assistance.