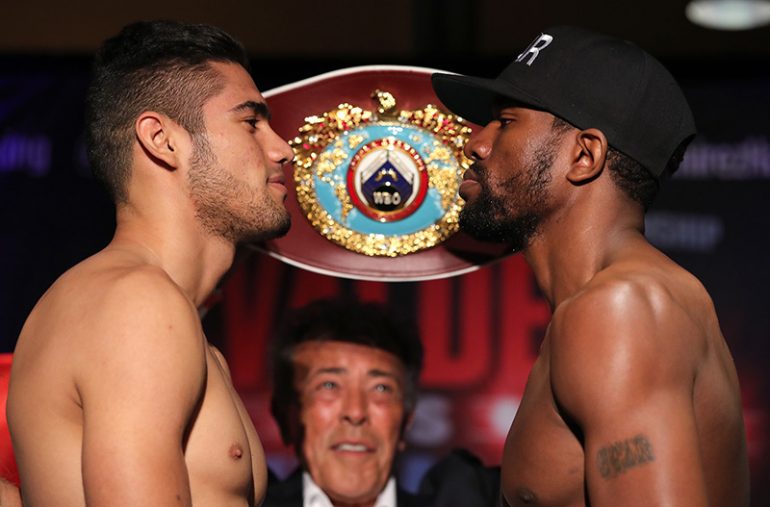 WBO super middleweight titlist Gilberto Ramirez (left) and Jesse Hart engage in a staredown after the weigh-in for their first bout in September of 2017. Photo: Mikey Williams/Top Rank
24
Oct
by Francisco Salazar

WBO super middleweight titleholder Gilberto Ramirez will face a familiar foe in his next title defense.

Ramirez will defend his belt against Jesse Hart on December 14, Top Rank CEO Bob Arum told RingTV. The 12-round bout will take place at the American Bank Center in Corpus Christi, Texas.

ESPN+ will stream the fight live.

The clash between Ramirez and Hart is a rematch of their competitive bout on September 22 of last year, when Ramirez dropped Hart in round two en route to a close unanimous decision victory.

“It’s a terrific super middleweight fight between ‘Zurdo’ Ramirez and Jesse Hart,” Arum told RingTV.com. “It was a good fight the first time.”

The southpaw Ramirez will be making the fifth defense of his title, although he has yet to face any of the top fighters in the division.

Ramirez (38-0, 25 knockouts), who resides in Mazatlan, Mexico, notched a one-sided decision win over Roamer Angulo on June 30, in Oklahoma City. He is ranked No. 1 by The Ring Magazine at 168 pounds.

Hart (25-1, 21 KOs) has won his last three bouts, all by stoppage, since the loss to Ramirez. In his most recent bout on August 18, in Atlantic City, Hart stopped Mike Gavronski in round three.

The 29-year-old Hart, who resides in Philadelphia, is the mandatory challenger to the WBO title. Hart is ranked No 10 by The Ring Magazine.