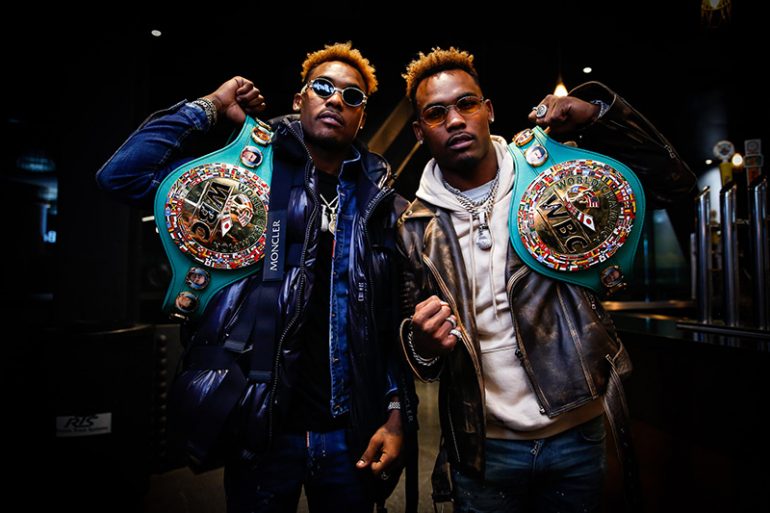 New platforms are appearing, new allegiances are cementing, green is exchanging hands, old dogs are shuffling off to the sunset…what exciting times these are in the boxing sphere.

As ever, though, when boiled down to the most elemental essence, it is about the athletes. It is about the fighters; the exploits they engage in that we marvel at. When offered in their premium form, it renders all the other sports drama and chatter of tectonic shifts to mere gossip fodder.

So, if Jermall Charlo handles his business in thrilling and dynamic fashion on Dec. 22 against Willie Monroe, and his twin comes to win and do so with vivid dynamism against Tony Harrison at Barclays Center, and televised live on Fox, then they will silence all other yapping.

The Charlos, mellowed, but not stripped bare of their color and all their edge, held court at Barclays on Thursday to hype the first tangos presented by Premier Boxing Champions on “free” Fox TV. It’ll be a four-year run, and yes, it must be said, many in the pundit class were not bowled over by the out-of-the-gates offering. The twins even acknowledged the critiques, but both made clear they are keen to fight the biggest and best in their realm, namely Canelo and GGG. But of course, being pros who have risen to this station not by accident, both made clear that they don’t see Monroe, a super-skilled technician, and battle-hardened Harrison, who did better than alright versus Jarrett Hurd before being stopped, as being walks in Prospect Park.

First order of business at Barclays Center, in front of a tight group of hardcore fight press, was the coin flip to determine which Charlo, Mall or Mell, would be the featured bout. Jermall called heads or tails, choosing heads, and flipper Gerry Cooney announced that heads it was. Thus, Jermall’s interim WBC title defense against Monroe will be the spotlit bout of the evening.

Front and center on mouths and minds is the fact that these bouts, and a heavyweight face-off between Dominic Breazeale and Carlos Negron, will run on Fox.

“You don’t need a degree from MIT (to watch this show),” said Tom Brown, the California-based fight-maker who is leading the promotional effort for Al Haymon’s PBC, to find these fights. That, of course, was a one-two at the stream set, of DAZN and ESPN+, both of whom have no shortage of detractors who believe it shouldn’t be hard to find fight fare in this age. No hurdles to be jumped, Brown made clear, on Dec. 22, flick to Fox, and voila, boxing in a two-hour time slot. 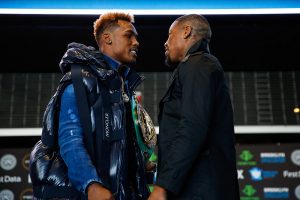 Jermall Charlo in his time at the mic thanked God first, and Al Haymon second. Both he and his bro mentioned that their Lion’s Only Promotions will help promote this event, and will be signing fighters and branching out into music and other avenues. He said that Monroe was chosen to be across from him, and he drew chuckles when he corrected himself, after saying “ass,” and used more deferential language. He promised an “explosive” outing, “something that Willie Monroe is going to remain with him for the rest of his life.”

Jermell Charlo during his time at the mic spoke respectfully of his foe, Harrison, who has done solid charitable works and in his hood in Detroit. “I’m super excited to be here in Brooklyn on Fox for the first time, we getting that check, cashin’ a check, the first check PBC receiving from Fox, me and my brother getting a taste of it, so you know, we cannot be more excited. Forget what the critics say, this going to be a helluva fight, a helluva card. We know Al Haymon how they stack things…these two individuals gonna come to fight. I’m glad to be fighting on the undercard…on the card, not really the undercard, I hope they change their minds!” 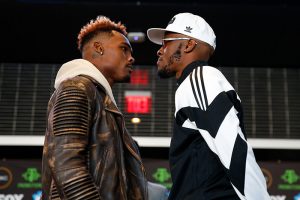 He alluded to, I believe, being more open to media coming to camp, to do some taping, for Fox programming. “We going to bring the excitement for Brooklyn, period,” Jermell finished.

Monroe at the mic made clear he was pleased as punch he got this shot. He said he is happy to be on the right “side of the fence, the Al Haymon side.” He lauded the Charlos for getting to this place and said “we gonna make it happen” to honor his birthday and Christmas.

Harrison too was respectful and came off as ready to rock. Several folks mentioned how hard he made Hurd work when they fought, and that Hurd has been making noise about wanting a danceoff with Jermell. “We’re both very competitive and that defines us as fighters, so I believe that’s going to add up to make this a truly explosive fight,” Harrison said. “I was honestly surprised that he took the fight, and I commend him as an athlete. He knows the danger in this fight that he’s taking.”

The twins held court before the presser kicked off, and as per usual, weren’t afraid to go there.

—Jermall said “Lion’s Only” won’t be soft, like a Golden Boy. They’ll target fighters like them, “hungry.”

—Jermall is a bit more edgy than Jermell, but Jermell showed the edge when he turned back the clock and clued people in on their come up. Ronnie Shields was training the twins and he worked with Juan Diaz and there was some politics going on with manager Willie Savannah and Shields and Evander Holyfield. Shelly Finkel actually got Jermell in with Golden Boy and, he said, he didn’t care for how GBP handled him. Point being, it’s been a long road to here.

—Jermall said he wanted to be “a lot more active” in 2019 but Jermell said he will let their ship be steered by the advisors. Both agreed that the signing of Manny Pacquiao to Team Haymon is a good thing, a move in the direction of more super fights getting made.

—Jermell said that disintegration results in better fights not being made and also there not being a dope video game. If there were a union maybe then that’d reach fruition…

—PBC’s Tim Smith tried to break up the party when I asked both if they were ever tempted to reach out themselves, to fighters they want to fight, to help make deals. “I’ve definitely reached out,” said Jermall, before being ushered to start the presser.

—After the presser, the twins took more press questions. They joked about the coin flip being rigged. The twins said their two signees will fight on the Dec. 22 card.

—Jermall said he doesn’t find it easy to be in the locker room watching his bro fight, before his.

—Jermell said he likes KOs that get IG viral love.

—Jermall said he hopes their next card will be them two, in against Canelo and GGG.

—Both guys said it is a big deal to be on “free” TV. More eyeballs are possible, they said.

—If this Fox show blows up, things get bigger next time. Boxing has to move toward booking super fights, they told media. Unifications are needed, they stated.

—Jermall was asked if he’d watch the Jacobs v Derevyanchenko fight on Saturday. “Should I,” he asked? He said he’d likely get home and get training instead.

—Jermell said he’s not a fan of hearing the Floyd v MMA fighter talk. He called MMAers “walking mummies,” and thinks boxers should focus on boxers.

—What about Eddie Hearn saying you need to be with DAZN to get to Canelo? Jermall said “the DAZN is a dozen dummies” and “Hearn get burned” but said that he had listened to an offer from Eddie and would be open to listening again, to a higher number. Jermell said the DAZN roster is filled with guys with too many Ls, not like “the Al Haymon crew.” Both agreed that greed keeps some of the best fighting the best bouts from being made, but both proclaimed love to Al Haymon. They said there has to be a Hearn offer to both of them, a package deal.

—Jermall recalled that he felt stung when Golden Boy was showing Jermell love, and telling him to wait.

My three cents: The twins seem to get it that this is another level they are hitting. Headlining, carrying the show….the checks are getting bigger and the upside will be larger, if they get Ws and do so in conclusive fashion. They didn’t come out and say it, but you get the feeling they know it better suits them to not get involved in intra-PBC beefs, on social and in person, and instead use their energies more wisely. It will be interesting to see how this card draws, in the building, and on TV, and three days before Christmas. Me, I root for the Charlos to do well, because they are not boring personalities, and the sport has enough of those.