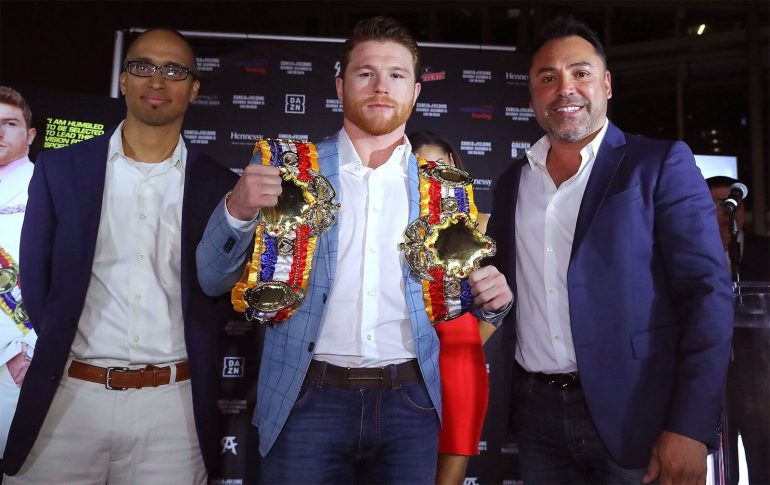 The back and forth on social media on Thursday between Oscar De La Hoya and Floyd Mayweather Jr. got as heavy-duty as anything they threw at each other when swapping leather in 2007.

De La Hoya was responding to a typically brusque assault delivered by Mayweather, who targeted not just the “Golden Boy” on Instagram but the recently crowned Ring champion Canelo Alvarez. This was Hatfields vs. McCoys-level and the head of Golden Boy Promotions amplified his views on the “Money” man when he attended a ceremony to hand the The Ring Magazine middleweight championship to Alvarez.


#TBT It didn’t matter if Canelo ate his PED steak or not this night, this was by far the easiest fight of my career! Connor McQuitter was a way better fighter than Canelo's cheating ass and I beat the brakes off him too! It takes me 36 mins or less to make $300 million plus. It literally takes me 1 night and 1 fight to make what you might make in 5 years and 11 fights! So really, who's still winning? You do the math!

“How fair is it that you have Canelo announcing this big, monumental deal (with over-the-top subscription service DAZN) and here you have Floyd crawling out of his little rock,” De La Hoya continued, “trying to sabotage or trying to steal the thunder? I don’t know what he was trying to do but, look, people know that Floyd is Floyd – and that’s fine – but…

“Canelo is going to fight the very best unlike Floyd, who waits for fighters to be over-the-hill or too young, the way he fought Canelo when he was too young…If Floyd really wants to fight, if he really wants to come out of retirement, crawl out from under his rock, then call out Canelo once again, at 160, and do the rematch and that’s it.”

The Ring Magazine world middleweight title and the pound-for-pound championship belt, by the way, were presented to Canelo at the Intercontinental Hotel in Los Angeles. Canelo, who also holds the WBA, WBC and lineal titles, will move up to 168 pounds to challenge Rocky Fielding (27-1, 15 knockouts) in a 12-round main event on Saturday, December 15 at Madison Square Garden, streamed live on DAZN.

Getting back to the beef…De La Hoya thinks Mayweather wants a Canelo rematch – “He needs money”…and “Fighters like that always go broke.” He said Mike Tyson spent money like a madman and Mayweather likely does too.

De La Hoya reiterated that Mayweather doesn’t like to fight people in their prime. He started to call Mayweather the P-word, then held back. The GBP boss said Mayweather fighting Canelo in 2013 would have been like him in his prime fighting Ryan Garcia.

“Floyd, stay under your rock, dude,” said De La Hoya, when asked to send a message to Mayweather.

One thing we know…this beef isn’t settled. Maybe the place to best settle it is in a – wait for it – ring? Mayweather vs. Canelo II, May 2019? Who’s up for that?