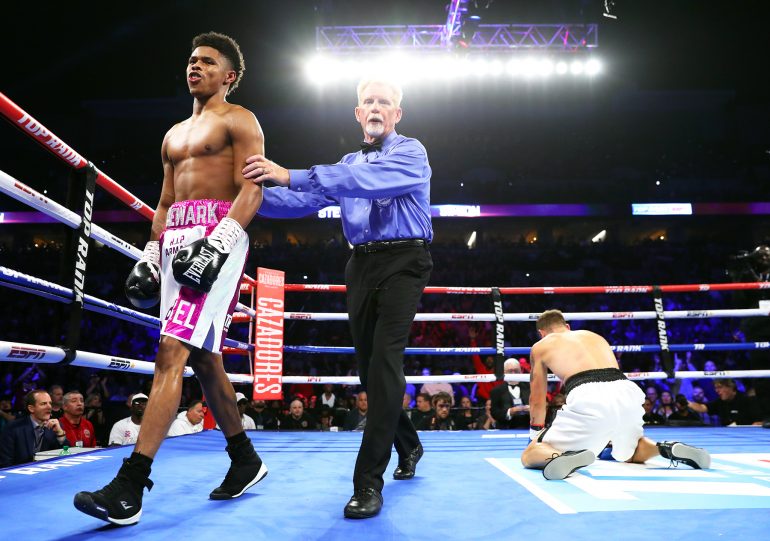 OMAHA, Nebraska — Shakur Stevenson possesses the amatuer pedigree and the talent. That was never in question.

But as a 21-year-old still finding his foot in the sport, there was doubt he owned the power and strength to keep world-class opponents off him, let alone finish them.

Against his toughest test to date, in his first scheduled 10-round bout, Stevenson needed just three minutes to dismiss the uncertainty surrounding him. The Olympic silver medalist scored three knockdowns of Viorel Simion on Saturday, the last of which forced Simion to grab the second rope for support as the referee halted the contest with no time remaining in the opening round.

Stevenson (9-0, 5 knockouts) inflicted the damage with tightly thrown right hooks that wobbled Simion seemingly each time they met their mark. The Romanian’s two previous defeats came against former titleholders — and current Ring-rated fighters — Lee Selby and Scott Quigg. In each of those outings, Simion lasted the 12-round distance. In fact, he had never tasted the canvas until he met Stevenson.

“I want Lee Shelby next,” said Stevenson, a native of Newark, New Jersey. “I feel like I’ve been calling him out forever. My grandad told me the right hook would be there, and I capitalized on it.”

The breakthrough performance on ESPN is Stevenson’s second outing since he was arrested in July and charged with battery following an altercation in a Miami parking garage. The featherweight returned to the ring with a new physique. “I’ve been lifting a lot of weights,” Stevenson told The Ring.

The improved power is also a product of improved accuracy, Stevenson noted.

“I saw an opening and I took it,” said Stevenson, who is advised by a group that includes former No. 1 pound-for-pound fighter Andre Ward. “He gave me the same punch every time. I told (promoter Top Rank) to test me, they tested me. I’m going to tell I want better opponents. I want the top guys.

“I feel I get better and better with each and every performance. I think I’m the best prospect, I’m not going to lie.”

Given more time to ponder his status in the sport, Stevenson, wearing a white-and-pink headband emblazoned with his native city’s name, believes he’s actually graduated from prospect to contender.

Simion (21-3, 9 KOs) was a late replacement for original Duarn Vue, who was forced to withdraw from the assignment with an injury. But the 33-year-old actually posed a bigger challenge, at least on paper. Simion was an accomplished amatuer who proved himself durable.

“Sometimes people fight down to the level of their opposition, and sometimes they fight up,” Top Rank president Todd duBoef told The Ring. “I think he’s incredibly talented, world-class talent, but he also needs the physical and mental maturity.”

He grew leaps and bounds in one night, just two months after he went the eight-round distance with a far lesser opponent. Stevenson actually wanted a fight with durable fringe contender Miguel Marriaga on Saturday, but Top Rank’s matchmakers shot the idea down. Now, Stevenson is asking for that fight again, and it could happen.

“Obviously, you always ride momentum,” duBoef said, “and when a fighter has swagger and they feel good about it, you don’t hold back a race horse.”