Manny Pacquiao will now fight under PBC banner, could return in January 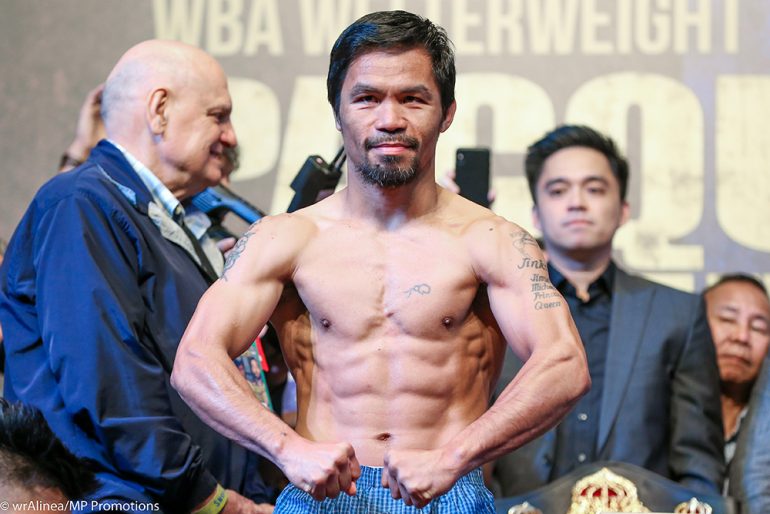 Manny Pacquiao, who reached global star status while fighting under the Top Rank banner, parted ways with the company following his July victory over Lucas Matthysse, his first knockout victory since 2009.

The Filipino senator has been linked to a rematch with Floyd Mayweather since the former rivals met up at a music festival in Tokyo. Now, Pacquiao has agreed to be represented by Al Haymon, multiple sources told The Ring. The ubiquitous head of Premier Boxing Champions, the largest — and best — collection of fighters in boxing, now counts Pacquiao and Mayweather among that impressive group.

Pacquiao (60-7-2, 39 knockouts) is being lined up for a January return, according to a source. One possibility: the 19th of the month in Las Vegas. PBC has requested to reserve that date with the Nevada commission for a show at MGM Grand Garden Arena. BoxingScene first reported Pacquiao’s alignment with Haymon.

Besides a potential mega-money encore encounter with Mayweather (their first bout shattered revenue records), there’s a plethora of intriguing opponent options for the 39-year-old, who looked rejuvenated in his last outing. Haymon advises every notable 147-pounder not named Terence Crawford.

There’s titleholders Errol Spence, Shawn Porter and Keith Thurman. Then there’s recognizable names like Mikey Garcia and Adrien Broner; the former has expressed a willingness to fight at welterweight, while the latter sometimes competes at 147.

There’s also bona fide contenders like Danny Garcia and Yordenis Ugas to match Pacquiao up with, in addition to fringe guys like Andre Berto and Devon Alexander. But make no mistake: in the twilight of his career, this move is about maximizing dollars for Pacquiao. That means a fight with Mayweather, and to a lesser extent, bouts with Broner, Spence, Thurman and Mikey Garcia.

Haymon is armed with the biggest network budget in the sport between Showtime, which is expanding boxing programming in 2019, and his upcoming deal with Fox, which kicks off in December.

Pacquiao, one of the greatest fighters of this or any generation, remains a recognizable name, and he’s traditionally competed on pay-per-view. However, his last two fights were broadcast on ESPN and ESPN+, respectively.

Now that he’s joined forces with Haymon, Pacquiao will fight on either Showtime or Fox, whether it’s on their linear offerings or on PPV. There’s one obstacle that remains, though.

Pacquiao still owes approximately $30 million to the IRS, according to multiple sources. He can’t fight — or train — in the United States until that matter is resolved. It’s largely why Pacquiao’s last two bouts (against Jeff Horn and Matthysse) were staged in Australia and Malaysia, respectively.

Haymon didn’t add Pacquiao to his stable to fight overseas, of course. He’s going to fight in the U.S., and a deal will have to be cut with the IRS, who levied hefty penalties against Pacquiao for filing late and also incorrectly, per sources. It’s likely that number Pacman owes will be slashed dramatically when it’s all settled.

Haymon could, in theory, hand Pacquiao with an advance to pay off the debt, with the money set to be reimbursed later. And if he scores another bout with Mayweather, he’ll be loaded with some much-needed funds.