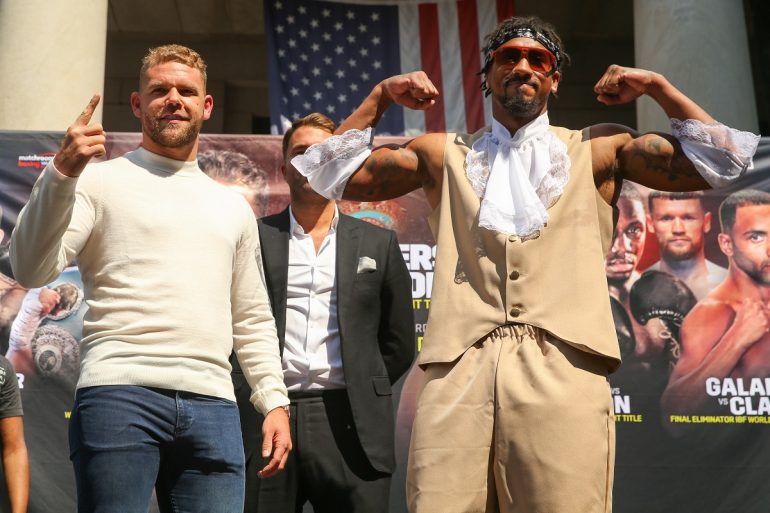 Billy Joe and Demetrius were set to battle in October 2018. Photo by Ed Mulholland/Matchroom Boxing USA
09
Oct
by Mike Coppinger

Billy Joe Saunders and Demetrius Andrade won’t fight each other after all.

The Brit was denied a boxing license during a hearing with the Massachusetts Athletic Commission on Tuesday after he tested positive for the banned substance oxilofrine. Saunders was scheduled to defend his middleweight title against Andrade on October 20 at TD Garden in Boston.

The WBO hasn’t stripped Saunders of its 160-pound title yet. He has the opportunity to show the Puerto Rico-based organization why the title shouldn’t be declared vacant, the WBO announced.

In the meantime, Andrade and the WBO’s next available contender, Walter Kautondokwa of Namibia, already completed a signed bout agreement in anticipation of Saunders being denied a license, sources told The Ring. Andrade will still earn $800,000, per sources, the purse he was scheduled to make against Saunders.

Andrade-Kautondokwa will headline Eddie Hearn’s event streamed on DAZN on October 20, and the winner could be crowned the new WBO middleweight titleholder.

The adverse finding was revealed on September 27, with Saunders and promoter Frank Warren arguing that the stimulant was found in a nasal spray the fighter was using. They also argued that oxilofrine is allowed to be used out of competition under the auspices of United Kingdom Anti-Doping (UKAD). It didn’t matter.

Both Saunders (26-0, 12 knockouts) and Andrade (25-0, 16 KOs) agreed to supplementary testing conducted by the Voluntary Anti-Doping Association (VADA) at Victor Conte’s behest. The former head of the infamous lab BALCO, who designed performance-enhancing substances for athletes like Barry Bonds and Sugar Shane Mosley, is overseeing Andrade’s strength and conditioning regimen at his SNAC headquarters in the Bay Area. Conte, now an advocate for clean sport, paid $16,000 out of pocket to cover the cost of comprehensive testing for both fighters.

“I know this is boxing and anything can happen in boxing and there’s a lot of money (involved), but there was a signed agreement, and it’s very clear in that agreement that they’re agreeing to a list of prohibited substances; it says at all times. You’re either pregnant or you’re not. They either found it or they didn’t. I think it’s a real simple case.”

VADA doesn’t differentiate between in competition and out of competition, and the Massachusetts commission respected the signed drug-testing protocol agreement. “You’re telling me there’s not going to be a fight and I’m denied a license?” Saunders said during the conference call, according to Conte. “I won’t be fighting on October 20?”

When the commission affirmed that yes, there would indeed be no fight, Saunders replied “You can all suck my prick!” The mercurial southpaw will miss out on a career-high purse of $2.3 million, per sources, and Tuesday’s decision only adds to the mounting trouble Saunders has faced.

The 29-year-old twice withdrew from scheduled middleweight title bouts with Martin Murray, citing injuries. It was revealed after the second cancellation that he had agreed to a fight with Gennady Golokvin in the event a deal with Canelo Alvarez couldn’t be struck for the rematch, casting doubt on the legitimacy of his injury claim.

Saunders also was fined $100,000 by the British Boxing Board of Control last month in the aftermath of a video that surfaced where the fighter entices a woman to attack a passerby in exchange for crack.

“I think this whole nasal spray excuse is highly questionable,” said Conte, who has sponsored more than 10 fighters for VADA testing in the past. “I have not been able to find any nasal spray that contains oxilofrine. It’s likely it came from an underground source. I was highly suspicious before this because he lost so much weight so quickly for his two previous opponents.

“I knew there was verbiage in the contract with Willie Monroe Jr. where they said they would be testing by VADA or the equivalent entity and there was no testing.”

Alvarez, who tested positive for the banned substance clenbuterol in February, scraping that May 5 rematch with GGG, claimed it was all a result of contaminated meat consumed in Mexico. Saunders, of course, blamed it on a nasal spray. Conte said that Alvarez’s alibi is plausible — “one out of three times in Mexico you’re getting contaminated meat” — while Saunders isn’t.

“This substance is about increasing heart rate and the cardiac stimulation is much stronger … it’s very powerful,” Conte said. “The only medical use (for oxilofrine) is low-blood pressure. I don’t believe he has low blood pressure. I believe he likely took this to help him lose weight. It accelerates the rate at which you burn calories. With each and every heartbeat it’s pushing more blood.”

So if Saunders indeed knowingly used the banned substance, why would he do when he already signed up for random, comprehensive anti-doping. Conte has a theory.

“He was held to WADA standard, which UKAD follows, and he had been using this stuff in the past — this is a guess on my part — and just didn’t use it on fight night and it doesn’t show up (in test results post fight),” Conte reasoned. “You can use methamphetamine, a stronger chemical cousin (out of competition in the U.K.), and it would be OK. I hope others don’t realize what a huge loophole this is and start using these dangerous substances.

“WADA has huge loopholes in it. VADA, it looks like, is the new gold standard in the sport of boxing. This is a great day for the anti-doping movement in boxing.”

It’s not, however, a great day for Saunders, Andrade or Hearn. The 30-year-old native of Providence, Rhode Island was preparing for the most high-profile fight of his career. Instead, Andrade is now relegated to fighting Kautondokwa (17-0, 16 KOs), an unknown commodity who has never competed outside Africa.

And Hearn, who is short on notable events for his deal with DAZN, loses the most highly anticipated fight on his fall slate.