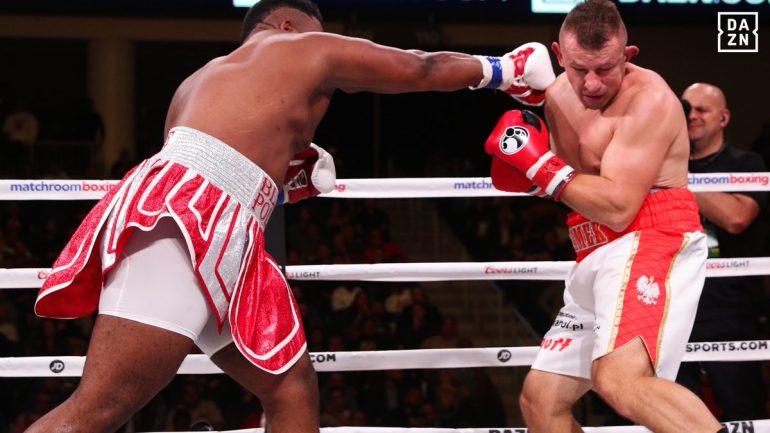 There was plenty of criticism tossed Jarrell Miller’s way after he weighed in at a monstrous 317 pounds.

It was clear “Big Baby” Miller wasn’t taking his opponent seriously, they said, but when he stepped in the ring, Tomasz Adamek was no match.

Miller walked Adamek down and imposed his will — and his 90-pound advantage — on the 41-year-old who is well past his best days. The Brooklynite pounded Adamek until a series of shots dropped the Poland native in the second round on Saturday in Chicago. Adamek beat the count on unsteady legs, forcing the referee to stop the bout at :51 of the frame.

The 30-year-old former kickboxer is angling for a shot at Anthony Joshua, and now that Miller is aligned with Eddie Hearn, it could happen next year.

“Jarrell is the best heavyweight in the world!” his promoter, former boxer Dmitry Salita, told The Ring. “The last year he has been the busiest top-rated heavyweight in hot world. He is inching in on a world title shot and believe he will be a heavyweight world Champion from Brooklyn following in the footsteps of heavyweight legends Riddick Bowe and Mike Tyson.”

Miller (22-0-1, 19 knockouts) has feasted on fringe contenders, and now, a former two-division champion, but the real tests await. He possesses impressive cardio for his immense size, and surprising hand speed. He’s also among the most charismatic characters in the sport.

Adamek (5-6, 31 KOs) couldn’t contend with Miller, and no other foes have been up to the task yet. Miller is rated No. 10 by The Ring at heavyweight, and soon enough, we’ll see if his talent lives up to his girth — and mouth.

“There is a great possibility that he will fight again before the end of the year and land the Joshua shot (at some point),” Salita said. “Based on Jarrell’s progress and Joshua’s last few performances he brings the unified belt back to Brooklyn where it really belongs!