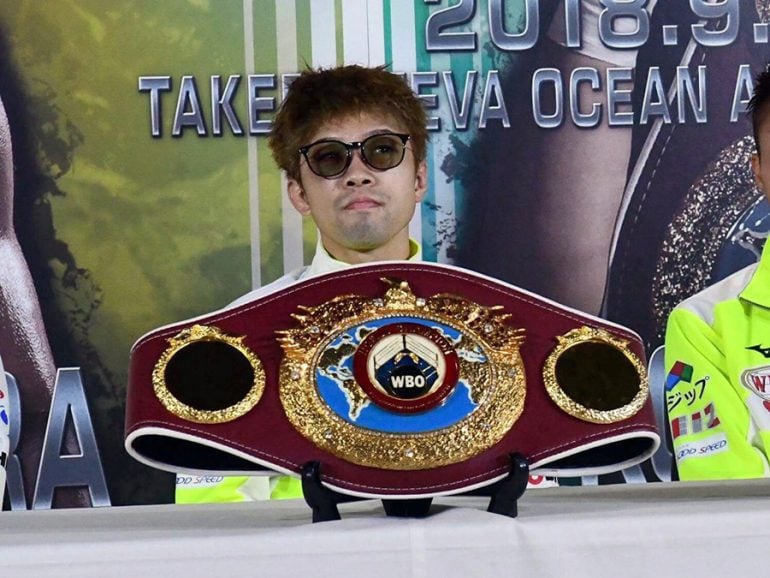 This past Monday in Nagoya, a packed house filled the intimate settings of Takeda Teva Ocean Arena to watch local sensation Kosei Tanaka in a Fight of the Year candidate against WBO flyweight titleholder Sho Kimura. Unless you’ve been living under a rock, you know that Tanaka not only won the fight, but also tied the mark set by Vasiliy Lomachenko as the fastest boxer in history to win titles in three divisions, doing so in just 12 contests.

With Tanaka now sitting at a comfortable 12-0 (7 knockouts), the flyweight division (and above) is his oyster as he sets his sights on becoming a top 10 pound-for-pound-rated fighter, with the thought of big-name opponents continually motivating him further. With the permission of his gym president, former WBC junior featherweight champion Kiyoshi Hatanaka, who was also in attendance, RingTV was granted an exclusive interview with the new flyweight titleholder.

Sitting across from Kosei Tanaka in downtown Nagoya, this writer could see that the swelling had subsided around Tanaka’s eyes, which the night before had ballooned from Kimura’s onslaught of power shots. It was just last year that Tanaka suffered two broken orbital bones in what was supposed to just be a touch-up against a tougher-than-expected Thai boxer, Rangsan Chayanram, before a massive domestic showdown against Ryoichi Taguchi, which later had to be canceled due to the injuries suffered. Bearing the recent action mind, along with his history, I naturally discussed his health, (which he quickly dismissed, assuring me he’s perfectly fine), along with his plans for the future and what it means to be a three-division champion.

Nick Skok: Congratulations on the winning performance last night. How does it feel to be champion again so soon after vacating your title at junior flyweight, and is there a difference this time as opposed to your previous two championship winning performances?

Kosei Tanaka: I’m happy to be champion again. Among my three championships, there hasn’t been a big difference with regards to my feelings, though if I must say, the first one was the most memorable. Among my past opponents, defeating Sho Kimura was the most delightful.

NS: How is your health after last night? Did you see a doctor, and if so, what did they say?

KT: I haven’t seen a doctor yet, but my eye feels fine. I feel fine. I’d be ready to go again in December, but I’m not sure if I’ll have a fight scheduled for the end of the year or not.

NS: You just won your third division title in only 12 fights. You’ve tied Vasiliy Lomachenko for the quickest fighter to reach that mark. It’s now “Lomachenko and Tanaka,” or “Tanaka and Lomachenko.” That’s history. What does this mean to you?

KT: It’s not the same. We aren’t the same. Lomachenko is on another level.

NS: Manny Pacqiauo is somebody you’ve said you look up to. Was this because he too was able to rise through the ranks, winning championships along the way?

KT: My dream is not to eventually become a five-division champion [like has been previously stated by others]. (The Japanese record is currently three: Hozumi Hasegawa, Koki Kameda, Kazuto Ioka, Akira Yaegashi, and now Tanaka). My style and desire is to face the best opponents available rather than focus on defending my title. (Note: the Japanese traditionally put a lot of stock into making consecutive defenses. The record holder is Yoko Gushiken, with 13 successful title defenses from 1976-1980).

NS: You mentioned beforehand that this was your toughest training camp to date. Could you please elaborate on that? Now you’re moving up in weight, so theoretically it should be easier, as the weight control won’t be as strict.

KT: I did a lot of running this during this camp. I hate running. I was specifically doing this to strengthen my mentality ahead of the Kimura fight and doing things I hate to do because I knew this fight would be brutal and I should be prepared to do things that I don’t want to do. 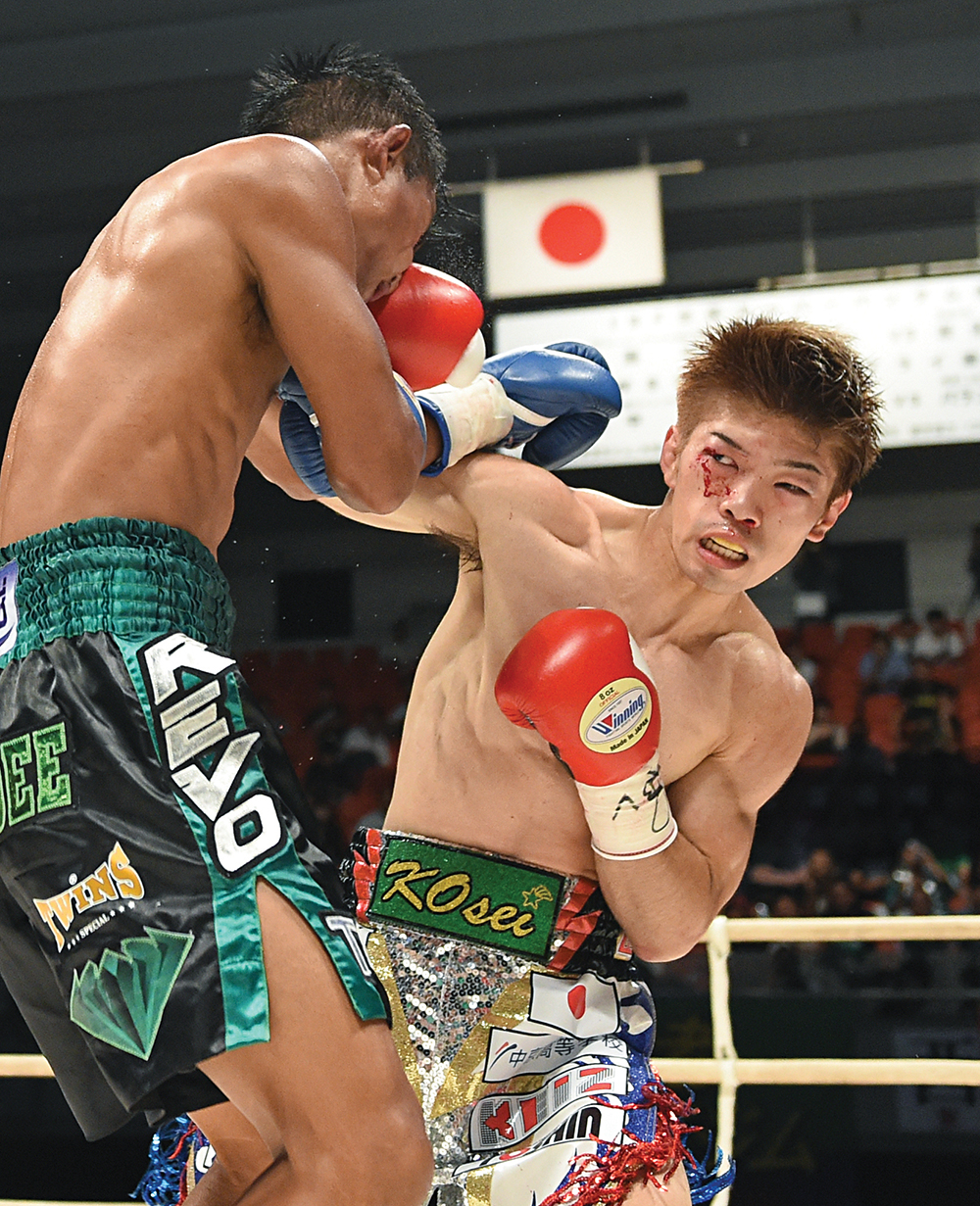 NS: I’m happy you brought up strengthening your mentality. What is going through your mind during such a difficult fight, and specifically, what were you thinking during that 12th round, after 11 rounds of war, when you’re both tired and beat up, but the decision could still be up for grabs on the scorecards?

KT: I honestly thought after the 10th round that I’d win on points. However, I knew I had to keep giving it my all until the last second. Since I specifically trained for this type of fight where I’d have to give it my best from start to finish, I knew I’d be able to do that. If I didn’t give it my best until the end, then I would’ve let myself down.

NS: Your father said a tough fight like this would help strengthen your mindset more. Do you agree with that?

KT: I’d have to agree with that. I’ve had that mindset since I was a kid doing martial arts.

NS: In the seventh round, Sho Kimura hit you pretty hard. Kimura says your glove touched the ground and that it should’ve been ruled a knockdown but the ref ruled it a slip. What happened?

KT: I lost my balance.

NS: He’s appealing the ruling to the WBO.

KT: It’s natural for both parties to have different views and thoughts. I’ll wait for the third party to make a fair judgment.

NS: You gained a lot of new fans last night with that performance. A lot of people were watching and saw that outcome, and naturally we want to know “what’s next?” A rematch with Kimura? Ryoichi Taguchi? – Watanabe usually has that New Years Eve timeslot available with TBS (Tokyo Broadcast System). You also have WBC flyweight champion Christofer Rosales. What would you like to do?

NS: When do you feel you’ll be ready for the junior bantamweight division? Do you have any specific goals you’d like to accomplish before that move, or what’s the timetable on that?

KT: I may move up in weight gradually as the weight control becomes more difficult. Until I determine when that point is, I’ll do as much as possible at my current weight.

NS: Do you know about the “Superfly” cards in the U.S.? Is that something you’d like to be a part of?

KT: Do you think I could entertain an audience in the U.S.?

NS: You gained a lot of fans last night. I think so.

The next night, this writer caught up with Ryoichi Taguchi at the Korakuen Hall in Tokyo after his stablemate Hiroto Kyoguchi won a one-sided blowout. I told him about Tanaka’s wish to fight him next.

Taguchi had this to say: “Right now I’m struggling with weight control [at junior flyweight], but my priority is securing a rematch with [Hekkie] Budler. I’m happy to hear Tanaka wants to fight me. If I move up to flyweight, then that fight is not impossible.”

The wheels are turning around the flyweight division in Japan, and it’s going to be interesting to see what becomes of it. I myself am excited for the next Tanaka war and truly would like to see the Taguchi matchup, should it materialize.

Regardless of who or when he fights next, Kosei Tanaka gained a lot of exposure this past Monday and has a tremendous opportunity to build on that. Fortunately for him, the division is ripe with talent and it’ll be easy to keep the momentum going.