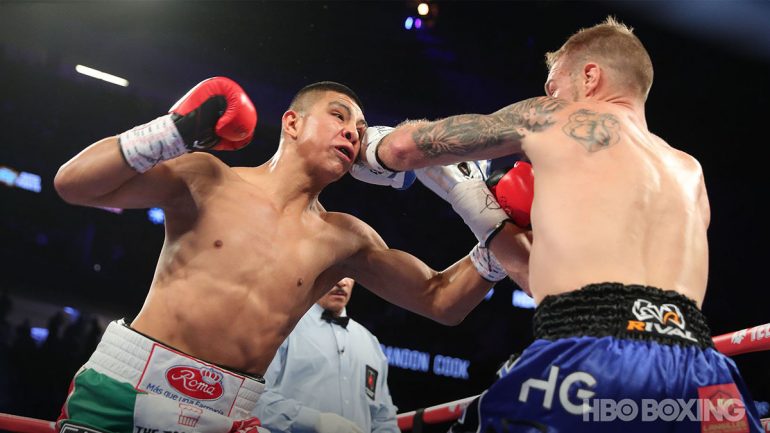 LAS VEGAS — Jaime Munguia continued his breakout campaign with his fifth fight of 2018, and it was yet another stoppage.

The rising star from Mexico made easy work of Canadian journeyman Brandon Cook with non-stop punching, and it took Munguia just three rounds to break him down and retain his junior middleweight title.

After a flurry of shots — many of them heavy body blows — referee Tony Weeks mercifully stopped the mismatch at 1:03.

“This was part of my development,” said Munguia, The Ring’s No. 4 junior middleweight. “I was not as focused in my last fight. But this time I came more relaxed. I was looking for the knockout too much (in my last fight). But now you’ve seen the results of my work.

“With each fight you will see me getting better. I just want to show that I can get better and that I want to face the best, so I can show that I am the best.”

Munguia faced the toughest opponent of his career in his last outing, a unanimous decision victory over former titleholder Liam Smith in July. And at just 21 years old, Munguia has plenty of time to develop. His size and punch volume are impressive, as is his relentless attacking style. Cook (28-3, 20 KOs) never was in the fight.

Munguia won the title with a fourth-round stoppage of Sadam Ali in May, and the Ring’s reigning prospect of the year could soon be in line for a shot at either GGG or Canelo.