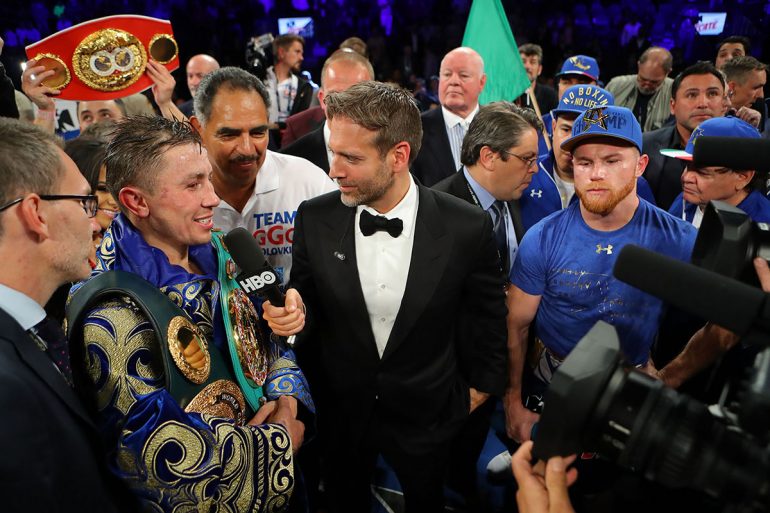 LAS VEGAS — HBO Sports long has boasted that “the best fight here,” and for the greater part of 40 years, it was true.

Heck, it still might be true. Despite their ever-shrinking slate of boxing programming, Saturday’s middleweight championship rematch between Canelo Alvarez and Gennady Golovkin looms as the biggest fight of the year by a country mile. The HBO Pay-Per-View event figures to surpass the 1.3 million buys generated by the first meeting between Canelo and GGG last September (which ended in a draw).

So even as Showtime surpassed HBO as the premium network with the most high-profile offering of fights — and the best stable, thanks to manager Al Haymon and PBC — HBO could still hang its hat on having the two biggest stars.

And even as PBC signed a partnership with Fox that will begin in December with at least $60 million in license fee funds; even as Eddie Hearn linked up with fledging streaming service DAZN that will kick off with a heavyweight title fight featuring Anthony Joshua and Alexander Povetkin a week from Saturday, HBO could still claim that the best do indeed fight here. That might not be the case soon enough.

HBO Sports holds first right of contract negotiations and last right of refusal with both Canelo and GGG (meaning they can match the best offer), per sources. HBO declined comment through a spokesperson.

Canelo wants to fight in December in New York. Golovkin also hopes to fight a third time this year, and HBO is aware of their intentions, but it’s unclear if the network has a date reserved for either of them.

Together, the news that the network’s two biggest stars could walk away is the latest domino to fall signaling HBO is not long for the sport they once reigned over.

The Mexican star’s status is a bit murkier than GGG’s. While Golden Boy Promotions maintains that Canelo is free to pursue other options, HBO sees the situation differently.

The issue at hand: HBO believes that Canelo owes the network a fight that would be available to subscribers (and not PPV) dating back to 2016. While no fight was announced at the time, the plan called for Alvarez to make his East Coast debut with a fight at New York’s Madison Square Garden on December 16, 2016.

However, those plans were scrapped when Alvarez fractured his right thumb in a ninth-round KO victory over Liam Smith.

“I’m sure (HBO) is going to hold strong, but my lawyers are saying it’s our last fight; very confident,” De La Hoya, who fought on HBO for almost his entire career, told The Ring on Thursday. “He’s a hot commodity, he’s just 28 years old, he’s not even at his peak yet. Look, I’m not saying that HBO is out of the picture, because HBO will never be out of the picture.

“HBO is like my family. But there’s different platforms that we have to take into consideration and do what’s best for the kid. I’m his promoter to get him the best deals.”

Alvarez jettisoned Showtime for HBO in 2014, and Saturday’s fight will mark his 13th appearance on the network’s programming. It also could be his last, and if he’s a network free agent come Sunday, the bidding for his services figures to be hotly contested, especially if he’s victorious against GGG.

He’s the biggest boxing star in North America, the only pugilist proven capable of delivering seven-figure pay-per-view buys now that Floyd Mayweather is retired. Golovkin, 36, is a star in his own right, but he doesn’t hold the crossover appeal of Alvarez.

Still, he would likely attract massive interest from ESPN, Showtime, Fox and DAZN if he indeed leaves HBO after 15 fights together.

Sergey Kovalev, once a pound-for-pound entrant and a staple of HBO’s programming, will fight Eleider Alvarez in a light heavyweight title fight rematch next year, but this time, the fight will be telecast on ESPN, not HBO, sources told The Ring.

Canelo and Golovkin delivered one great fight already, and the rematch figures to be a financial windfall for HBO. Just maybe, network executives at AT&T (which recently merged with Time Warner to become HBO’s parent company) will see the allure of boxing.

Maybe HBO will bounce back and infuse more money into the budget to retain the services of both Canelo and GGG. But if they don’t and the fighters depart for another network, it could be the death knell for HBO as a major player in the sport.