Canelo: GGG’s doping accusations ‘kicks and screams of someone who is drowning’ 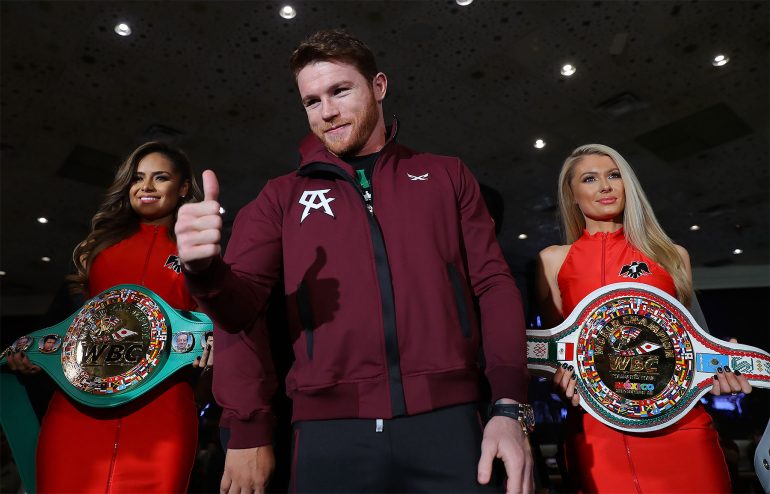 LAS VEGAS — Canelo Alvarez revealed a wry smile as he sunk into a plush gray chair inside a lounge at the MGM Grand, just four days before he meets Gennady Golovkin in a rematch of their highly controversial middleweight championship fight.

Moments earlier, GGG doubled down on the belief he spotted track marks all over the Mexican’s body — on his biceps, abs and back — when they met in the ring one year ago, proof to the 36-year-old that Alvarez was on the juice. Canelo simply laughed it off.

“Those are the kicks and screams of someone who is drowning,” Alvarez, decked out in a red track jacket atop black track pants, told reporters following his grand arrival on Tuesday. “Those are the excuses that they’re making for what’s coming this Saturday, which is a loss for them.

Since Alvarez (49-1-2, 34 knockouts) tested positive for the banned substance clenbuterol in February, his integrity has been questioned at every turn. He remains steadfast: the adverse finding was the result of contaminated beef consumed in his native Guadalajara, where the regulations on meat are far less strict compared to the U.S.

Golovkin (38-0-1, 34 KOs) doesn’t buy the alibi. The Ring’s top 160-pounder stewed over the cancellation of their encore counter planned for May 5, and the 10s of millions of dollars that fell by the wayside. He’s constantly complained that Alvarez is a cheater — “he insulted us by claiming what he claimed.”

The 36-year-old also took aim at Alvarez’s machismo. The redhead ran, he insists, rather than box and move. When he was asked by a reporter if Canelo excelled at any one thing better than he anticipated, Golovkin said, “Yeah, running.” 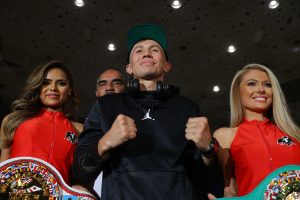 And, of course, GGG believes he was robbed of a rightful victory in the first bout after the bout was declared a draw. Canelo, too, feels he won, but has no issue with the decision.

That’s OK, he says. It might be business for Golovkin (at least that’s what he claims), but for Canelo, it’s very much personal.

“I’m bothered by all the stupid things they’ve been saying and I’ve been using it as motivation in my training for this fight,” said the 28-year-old, who is noticeably leaner. “Maybe they said (it all) to get me mad, and you know what, they did it, I’m angry, but I’m going to use it my favor for this fight.

“After the first fight, I saw the errors that I made, and what I have to do. I made a complete, radical change and you’re going to see that this Saturday.”

Canelo admits that “it could be dangerous to go in there with a hot head,” but he believes that ultimately, the rage will fuel him if he can channel it intelligently through controlled aggression.

And if Saturday is to be Canelo’s redemption song, that’s exactly what he’ll need. For Oscar De La Hoya vows his fighter must score the knockout and leave no doubt who the best middleweight in the world is. It would be quite the feat — Golovkin’s chin is considered the best in the sport (he’s never been knocked down in 39 pro bouts).

“You must prove them wrong with your actions. Canelo must go out there and prove everybody wrong. He has to go inside the ring thinking that not only does he want to knock Golovkin out, but he wants to knock out every naysayer that has been against him.”

And there’s been no bigger detractors than Canelo’s opponent and his coach, Abel Sanchez. The former trainer of the year has needled Canelo at every turn, pleading with him to jump into a firefight with GGG this time around. Run, run, run. Over and over the verb, a term of derision in boxing, has been tossed at Canelo’s feet.

“Those are Abel’s comments,” Canelo said. “Golovkin does not have the balls to actually say that or think that on his own.”

He promises to be more aggressive, but his new, more slender frame suggests he plans to use speed and angles to attack rather than stand in the pocket and trade. Either way, the knockout is coming; that much he’s certain of.

He visualizes it every night while he lays in bed: how he’s going to separate Golovkin from his senses, and the euphoria that will wash over him after seven months of anguish.

But seeing it and doing it are two vastly different matters.

“I just want him to do what he said he would do,” Golovkin said, inviting Canelo once more to seek the knockout that would bring vindication once and for all.