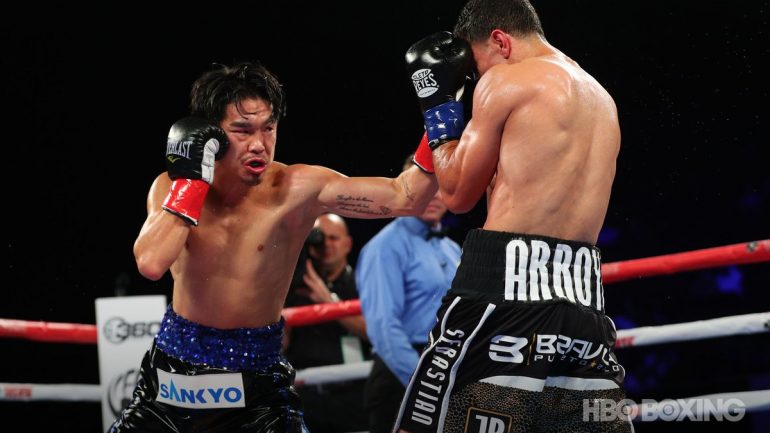 INGLEWOOD, California – Boxing fans unfamiliar with Kazuto Ioka got a better understanding of why the hardcore hipsters of the Twitterverse were so high on him after the three-division titleholder from Japan scored a one-sided but hard-fought unanimous decision over 115-pound contender McWilliams Arroyo on Saturday at The Forum.

Kazuto, a superb boxer-puncher from Osaka, won by scores of 99-90 and 97-92 (twice) in the opening bout of an HBO “Boxing After Dark” broadcast and the first of three co-main events on the “SperFly3” promotion.

It was the first time the 29-year-old veteran had fought outside of Japan and he made a strong impression by dropping Arroyo (in Round 3) en route to outpointing The Ring’s No. 6-rated junior bantamweight in his 115-pound debut.

“I’m very appreciative of the opportunity to fight here in America,” Ioka (23-1, 13 knockouts) said after the bout, “it was exactly as I thought it would be. It was a great atmosphere.

“(Arroyo) was a tough fighter, and my game plan worked perfectly.”

Ioka, who ended a brief retirement against Arroyo, was also dealing with inactivity, having not fought since last April. But no ring rust was evident in the former unified (WBA/WBC) strawweight titleholder, WBA junior flyweight beltholder and WBA flyweight boss. 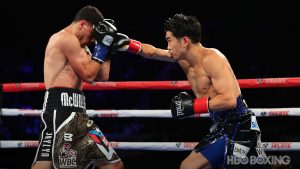 Ioka, who was The Ring’s top-rated flyweight at the time of his retirement earlier this year, displayed an entertaining blend of speed, timing, technique and aggression against Arroyo (17-4, 14), a 32-year-old Puerto Rican Olympian who was coming off a career-best victory – a majority decision over former titleholder Carlos Cuadras in February.

“It was a real tough fight,” Arroyo said. “I thought it was a closer fight. I knew he was going to be a quality opponent when I took the fight and he really showed me in the ring how good he is.”

Arroyo-Cuadras was the co-feature to the SuperFly2 card, which also took place at The Forum and was headlined by the Srisaket Sor Rungvisai-Juan Estrada WBC/Ring junior bantamweight championship. Ioka flew to California and bought a ticket to the show to get a close look at the world’s best 115 pounders. Watching the action stoked the competitive fires in his belly and not only convinced the former champ to unretire, but also that he could beat the winners of the co-main events.

He made good on one half of that promise to himself on Saturday. By winning the WBC’s silver title in the process, he set himself up to eventually take on whoever holds the WBC title next year (Sor Rungvisai and Estrada are expected to go at it again sometime in February or March in the main event of SuperFly4).

“I can’t wait to come back and fight on SuperFly 4,” Ioka said. “I want to fight any of the top super flyweights.”