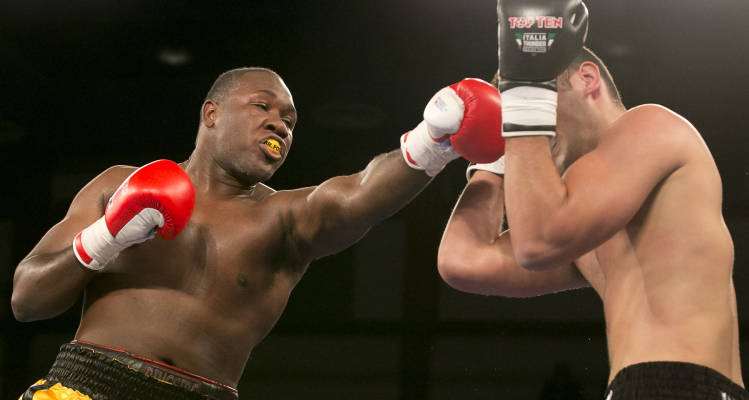 Clayton Laurent Jr., who represented the Virgin Islands at the 2016 Olympic Games in Rio, will make his long-awaited stateside debut tonight as he takes on Sherman Artis Jr. (3-2) to open the Danny Garcia-Shawn Porter undercard action at Barclays Center in Brooklyn, New York.

The 6-foot5, 291-pound heavyweight is coming off a 13-month layoff since dominating Wayman Carter last August in his professional debut, scoring a second-round knockout in front of his hometown fans in St. Thomas. Then, a Category 5 hurricane (Irma) devastated the entire island and put Laurent’s pro career on hold before he could even get started.

“The hurricane destroyed everything, including our boxing gym,” Laurent told The Ring by phone while en route to New York City for fight week. We didn’t have power, we lost our normalcy. It was tough.”

Shortly thereafter, promoter Lou DiBella swooped in and signed Laurent (1-0, 1 knockout) to a promotional contract with the hopes of grooming the stepson of former two-time world champion Julian Jackson into a force in the crowded heavyweight division.

“I first met Lou back when my brothers were helping Sergio Martinez prepare for Julio Cesar Chavez Jr.,” Laurent recalls. “I really appreciate what he did with Sergio’s career and how hard Lou fights for his fighters. Lou always does the right thing for his fighters, and that’s what sets him apart.”

While Laurent will enter the ring tonight almost weighing almost 60 pounds more than his opponent, he believes fans will be in for a treat with his boxing style.

“Of course I have power, and if I can knock him out I will, but I can box and I can go rounds,” Laurent said. “I am a smart fighter who throws combinations and goes to the body.”

Having a stepfather and trainer like Julian Jackson can put extra pressure on an up-and-coming fighter, but Laurent sees only positives in their relationship and relishes the opportunity to grow as a professional boxer under the tutelage of Jackson.

Jackson also helps Laurent train his mind as well as his body as he prepares for the long grind of working up the ladder to bigger fights.

“He knows what it takes to be a world champion,” Laurent said. “Now it’s my turn to become a world champion, and I have the perfect team to help get me there. And it all begins in New York City. My father helps me both in and outside the ring to make sure I’m prepared to handle what’s at stake. I am going to have a champion’s mindset as I enter the ring.”

The 28-year-old Laurent had a long amateur career racking up tournament wins all over the world before qualifying for the 2016 Olympics. After wining the opening-round bout, Laurent ended up losing to eventual gold medal-winner Tony Yoka from France in the second round.

“It was an amazing experience,” remembers Laurent. “My favorite part was walking into the stadium for the first time with 50,000 people cheering for me. It was a like being in a movie. I felt like a celebrity with people wanting to take pictures with me. Now the next goal is to become a world champion.”

Laurent hopes tonight is the next springboard to bigger opportunities on brighter stages, both in the United States and abroad.

“I’m super excited for this terrific opportunity to build my fan base in New York, and I stayed hungry for many years to get an opportunity like this. I won’t let myself and my family down.”