Is Felipe Orucuta worthy of a SuperFly main event? 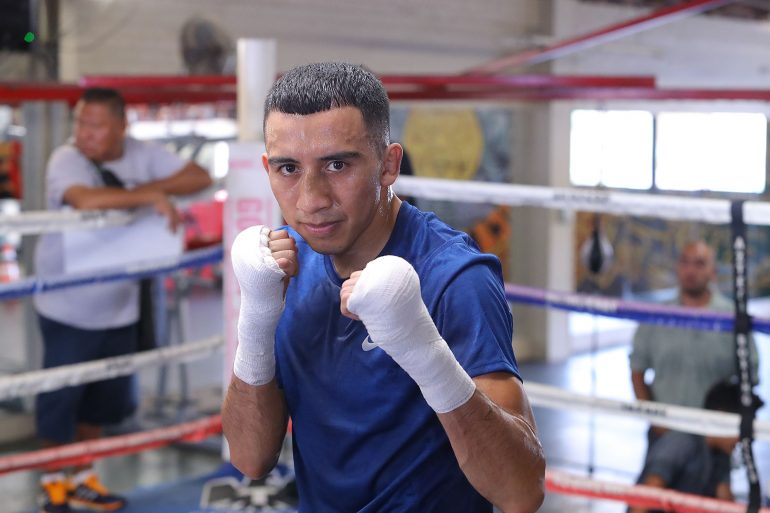 The main events for the first two SuperFly promotions were as good as boxing gets.

The brain child of promoter Tom Loeffler pitted the best fighters in the deep 115-pound division (known as junior bantamweight or super flyweight, hence the name of the series) against each other, often creating sensational results, especially in the main events.

The Srisaket Sor Rungvisai-Roman Gonzalez rematch topped the inaugural SuperFly card, and Sor Rungvisai vs. Juan Francisco Estrada was the headliner for SuperFly2. Those matchups epitomized “the best vs. best.” The headliner for SuperFly3, which takes place tomorrow night at The Forum in Inglewood, California, is Estrada vs. Felipe Orucuta. That’s the best vs. …, well, not the best. Even Orucuta would admit that.

“Estrada is one of the best fighters in the world,” Orucuta told The Ring on Sunday through translator German Villasenor before a public workout at Azteca Boxing Club in Bell, California. “Even though he lost a very close fight to Sor Rungvisai, I still think he’s the best overall boxer in the super flyweight division.

“He was a champion in two divisions and now he’s the class of my division. I fought for a super flyweight world title twice, against Omar Narvarez, and I lost both fights. Those fights made me a better boxer, but I can’t say that I’m on Estrada’s level. However, this is the level of fight that I’ve been working for my entire career. I’m in the best shape – mentally and physically – of my life because I want to prove that I’m worthy to once again challenge for a world title.”

Orucuta, a 32-year-old veteran based in Mexico City, was being modest when he mentioned his two title challenges. He fought Narvaez – then-The Ring’s No. 1-rated junior bantamweight – in the defending WBO beltholder’s native Argentina where he lost a split decision in 2013 and then a majority decision in 2014. Who knows? Those could have been close victories had the fight taken place in Mexico.

Orucuta’s only lost four times – once by stoppage (due to cuts) – during his 12-year pro career. He was a decent amateur who compiled a 73-5 record and won the Mexico City Golden Gloves title in 2005. Orucuta is also pretty big for the junior bantamweight division – standing 5-foot-7 and sometimes fighting as heavy as junior featherweight. He obviously carries good power as evidenced by 30 stoppages scored in his 36 victories. His best pro victory is probably his 10th-round stoppage of former WBO titleholder Julio Cesar Miranda in 2012.

All told, Orucuta, who is rated No. 7 by the WBC, is a solid pro. However, he’s unknown in the U.S., which is why some fans and members of the boxing media have ripped the HBO-televised matchup.

Loeffler thinks that criticism is unfair.

“When you look at the overall show, when you look at Kazuto Ioka vs. McWilliams Arroyo and Donnie Nietes vs. Aston Palicte, and then you have the main event with Estrada, who has been on all three SuperFlys, this is a quality card and a huge opportunity for Orucuta,” Loeffler told The Ring after Thursday’s final press conference. “He realizes this is one of those once-in-a-lifetime opportunities to be on HBO, and to face an elite Mexican fighter; and if he wins the fight he’s guaranteed a shot at Sor Rungvisai. So, I think you’ll see Orucuta really inspired and motivated for this fight.” 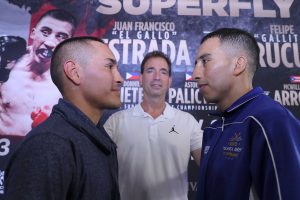 Orucuta said as much during his time at the podium on Thursday.

“This is a great opportunity against a great champion on a great card in a great arena,” he said. “I assure you, I will give you my best.”

To be fair to both Orucuta and Loeffler, the bar was set almost impossibly high for SuperFly main events.

The main event to SuperFly No. 1, which took place at StubHub Center in Carson, California last September, was an immediate rematch of a bloody Fight-of-the-Year candidate between the former pound-for-pound king (and future hall-of-famer) and a card-carrying badass banger from Thailand, who shocked the boxing world by winning their first bout by disputed majority decision.

The eyes of the boxing world were on Sor Rungvisai when he annihilated Gonzalez in four rounds. In the co-featured bout to that brutally shocking stoppage, Estrada narrowly outpointed Carlos Cuadras in a rousing 12-round bout that earned the former 108- and 112-pound titleholder a WBC-mandated shot at the newly anointed Thai hero. The Sor Rungvisai-Estrada showdown was the main event for SuperFly2, which took place on February 24 at The Forum. Like the first SuperFly card, it was televised live on HBO and the dramatic 12-round battle for The Ring’s vacant junior bantamweight title (narrowly earned by Sor Rungvisai) is still a Fight-of-the-Year candidate.

Loeffler’s original plan for the SuperFly3 main event was an immediate Sor Rungvisai-Estrada rematch, but The Ring/WBC champ had different ideas.

“Sor Rungvisai’s team wanted to have a non-title fight in July, which the WBC approved, and he wanted to have a title defense in Thailand in October,” said Loeffler. “So, hopefully if everything falls in place we’ll have a SuperFly4 in February or March, and Sor Rungvisai – if he beats Iran Diaz – will come back to the U.S. for the main event and fight his mandatory, which will be the Estrada-Orucuta winner. 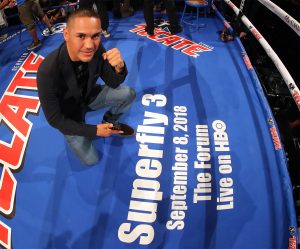 “When Sor Rungvisai became unavailable, we looked at some other opponents, but it was challenging to get someone to fight Estrada. He’s a special fighter, and he’s come into his own. He’s popular with L.A. fans, and I think as long as he’s got a credible opponent in front of him, which is what Orucuta is, he’s the type of fighter that deserves to headline at The Forum.”

The co-featured bouts of tomorrow’s HBO telecast (9:45 p.m. ET/PT) are certainly up to SuperFly snuff. The show opens with the return of the briefly retired Ioka, a highly respected three-division titleholder from Japan, making his 115-pound debut against Arroyo, a well-schooled Puerto Rican Olympian currently rated No. 6 in The Ring’s junior bantamweight rankings.

Ioka-Arroyo will be followed by Nietes-Palicte, an all-Filipino crossroads fight for the vacant WBO 115-pound title. Nietes, a 37-year-old veteran rated No. 9 in The Ring’s pound-for-pound rankings, is going for his fourth title in a fourth weight class. Palicte, the NABF titleholder, isn’t as well known or respected as his countryman but brings decided advantages in size and youth to the matchup.

“The winner of Nietes-Palicte will be the WBO champion so you can easily see the winner in a unification fight on SuperFly4,” Loeffler said. “Even with Ioka-Arroyo, whoever wins that fight will definitely move up in the ratings, especially the WBC because it’s for the WBC silver belt, and he’ll be in line to face one of the champions. The winner of that fight could be on SuperFly4, and even the loser, if it’s a competitive fight.

“Arroyo’s put on so many great fights, and so has Ioka. Arroyo lost to Chocolatito but he came back and he beat Cuadras in a very impressive performance on SuperFly2. Estrada lost to Chocolatito back in 2012, on the undercard of Brian Viloria-Tyson Marquez, and now those two are the stars of the division. That’s what being on this HBO platform has done for them, as it has for Sor Rungvisai.

“It could do the same for Orucuta. It all depends on how he fights on Saturday.”