DAZN details its mission to bring more boxing to the masses

The future is here and now, my friends, so wrap your brain around that. If you are tech-averse and long for the days when there were like five TV channels for you to pick from, then you might want to adapt to the new reality.

That reality, in the form of how boxing is going to be presented more and more, became that much more cemented for me when I visited the DAZN crew in their New York City headquarters, near Zuccotti Park and Wall Street’s bull.

On Thursday,  the DAZN gang told me about their plans for a platform launch. The platform and the company are already present and a massive influence in most pockets of the world and want to grab their share of the pie when the “DAZN in the U.S.” platform goes live Monday, September 10, sometime between breakfast and lunch.

Marcus Parnwell, DAZN’s director of product, told me that he and the DAZNers want to make the product accessible everywhere. That means on most devices that support streaming. DAZN is all about all sports around the world but is going all-in on fight sports in America, with Matchroom Boxing and Bellator MMA. That is a solid takeaway I took from my visit. Parnwell said they want fight fans to cross over and don’t think boxing and MMA audiences should be so separated.

Parnwell came off as confident but humble in the execution, in that they all realize this is still a work in progress. Perform Group and DAZN are all about looking at data, analyzing what, when and where people watch. Ultimately this will help them give the people what they want. There will be fight nights, in fact six of them, between boxing and MMA, starting September 22, when DAZN streams the Anthony Joshua vs. Alexander Povetkin battle from England. Now, I hear from many of you fans, many of you who like the old ways, and are opposed to subscribing to a new platform. “DAZN is about bringing the sports to everyone and getting them to embrace it,” Parnwell said, adding that he loves the $9.99 price point and believes a free month of “Buy it and try it” and feel free to cancel whenever will get masses hooked.

Parnwell chuckled when I asked if DAZN wanted to take over the world, to basically see this direct-to-consumer set-up render the HBOs and Showtimes less relevant. He made it clear that the bar is being set high for DAZN but “We want to change the way people watch the sport.” No, he didn’t do a Dr. Evil laugh and slam the cablers…

Content producers have been working on building hours worth of watching for awhile, so, on Monday, you will be able to see what they want to do differently. They will shoot the fights and probably the ancillary material a bit differently. Some of the talent will be a bit more current and they’d like to fold in opinion and commentary from non-boxing people. Yes, Hollywood is welcome to advertise its luminaries who dig boxing and MMA. “We want to look at the intersection of fight sports and pop culture,” said Haiwen Lu, director of PR in the U.S. “It’s about the hardcore fans but also about who else we want to bring in!”

You will see data, some technical breakdowns and such and then, if the data readers see that you dig it, you will get more. If not, less. They will be responsive to market desires. 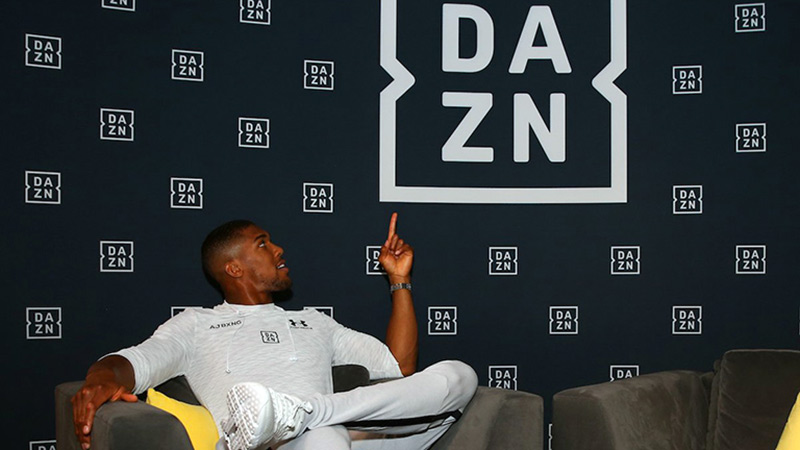 Anthony Joshua’s IBF/WBA/WBO heavyweight title defense against Alexander Povetkin, on September 22, won’t be seen on Showtime or HBO. It will only be available on DAZN’s new streaming service in the U.S.

The DAZN effort is part of a push to make boxing more respected again. Al Haymon sought to do that with Premier Boxing Champions; ESPN is honoring it now and DAZN is pushing it hard. They want to triumph in the fact that there will be 90,000 packed into Wembley Stadium to watch Joshua vs. Povetkin and they will be working hard to tell fans and attract new ones by showing off why we should care about them. All in the room agreed that the quality of the matches is most important, that the fights will have to stand on their own as the main attractions.

I got the sense they want to be fresh but be respectful to old guard boxing fans. “You guys don’t need any teaching. You guys are the biggest sports loving country in the world,” declared Parnwell, an Aussie. “We don’t want to be patronizing because you guys like what you like.”

No, they wouldn’t give me any hints on what’s to come for November and December, so you know. They reminded me that Season Two of the World Boxing Super Series will be a real attraction to those on the fence at ponying up for this monthly menu of fight sports.

“We are big on making boxing a global attraction,” Parnwell said. And because DAZN will have such a breadth of reach, is well-suited to make that hard push. The fan feedback to WBSS had to convince on-the-fencers that they can root for a good fighter from anywhere. It’s fighting that matters and moving stories and superior action speak volumes, no matter what language the hitters speak.

“We want users to see boxing they’ve come for and MMA they didn’t know they came for,” Parnwell said. As I checked out the home page, I noticed, for now, at least, it was image-heavy, very minimal text, so this will aim at the generation that seeks to consume less text or more video. That’s a no-brainer, if you are looking to widen out your subscriber base.

These folks didn’t come off as having figured it all out, having discerned all the ills and thus are presenting themselves as saviors. So will they have more or less interaction for viewers or do they want that all to go to Twitter? Time will tell…

DAZN’s Head of Programming Scott Woodgate made clear that he believes viewers will be served mightily with Perform’s investment and belief in data collection and sifting. He also sounds very enthused about the WBSS.

We talked pricing; we chatted about the new understanding of the need for paywalls and how some folks who’ve gotten the milk for free are balking. Think of it as being the cost of two beers, maybe (or two “cold brews” if you live in NYC). “We think $9.99 is a great price for what you get,” Parnwell said. And there was no talk of eventually doing a pay-per-view, for the record.

My three cents: I sense you will see DAZN being proficient at helping us get to know combatants and look to marry mindsets, grab boxing fans from MMA and vice versa. To me, the price point is reasonable and the no-contract option makes me feel like I have wiggle room, which I don’t think I’ll need. This is a golden age for content creators and, yes, content needs to be paid for, so I understand charging for it. DAZN’s success can help make the sport bigger and grow the pie and, in theory, that can be something from which everyone can benefit.