September 15 is right around the corner and, with that, the full realization from boxing fans that they will be asked to reach into their pockets and pony up for the privilege of watching WBA/WBC middleweight titlist Gennady Golovkin renew acquaintance with Canelo Alvarez.

The sequel to their September 2017 scrap will unfold following a period of animus, of severe squabbling between the two teams. The anticipation level is high; this one will stand out as the highest profile boxing match to take place this year.

However that doesn’t mean the masses are enthused about all sides of the scenario. Specifically I’m seeing beefing on social media about the pricing.

In my neck of the woods, Brooklyn, New York, Spectrum is the main provider of cable TV and it’s offering the event for $84.95. If you recall, last year, the first clash between the middleweight kings went for $69.99 in standard definition and $79.99 for high-definition.

I talked to Tom Loeffler, the promoter of “GGG,” the fighting pride of Kazakhstan, who now makes Los Angeles his home base. Talk to me about the pricing please, I asked Tom. But of course, not everyone is enthused about reaching into their pockets…

“This is the biggest fight of the year with a great pay-per-view undercard, probably the best pay-per-view undercard in years,” Loeffler told me. “It’s a lot of value for fans to see so many great match-ups leading up to the main event. GGG and Canelo is the most anticipated fight and really worth that price, adding (Roman) ‘Chocolatito’ (Gonzalez), (WBO junior middleweight titlist Jaime) Munguia, (David) Lemieux and Spike O’Sullivan are all big bonuses for the fans.”

Noted. I agree on the contention that this card is loaded and I applaud that. Giving tip-to-top value only makes sense to me, from my perch as a consumer. (Remember, I am a fan first. I represent you – and us – first and foremost.)

OK, so were different price points debated? Did all involved – and that includes HBO, the PPV production arm and Golden Boy Promotions, Canelo’s promoter – talk about different prices?

“It was a collective decision with both sides of the promotion and the folks from HBO because this is a much hotter fight, with all the controversy swirling around the cancelation of May 5, along with the fact that the fans know these guys really don’t like each other anymore,” Loeffler explained. 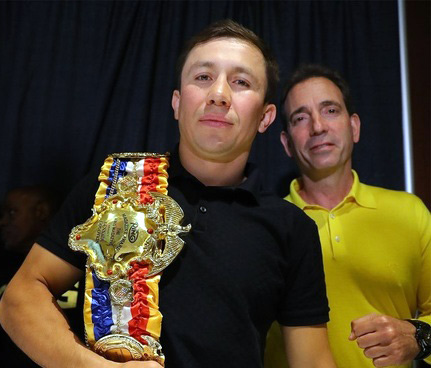 Non-HD, which isn’t offered in every jurisdiction, is $74.95. And Loeffler points out that, in boxing, the mega-stars like GGG and Canelo are very well compensated. We hear of “trickle down economics.” The revenue cut for these pugilists isn’t necessarily that. “It’s a stream, as the fighters are getting the large majority of the revenue and these two have earned it with their popularity,” Loeffler said.

A couple points: This fight occurs at a time when the sport is in flux. Since last year at this time, Top Rank has gone all in with ESPN and ESPN has ponied up aggressive money to land a massive load of content, which will run on ESPN and ESPN+. Fans have been offered the ability to access all of that if they choose to pony up $4.99 a month, which allows them to watch the fights Top Rank and ESPN+ stream. A new seven-year deal, announced a month ago, runs from 2018 to 2025 and includes 54 events per year, as well as a full offering of exclusive shoulder programming, classic fights and studio content.

But of course, you will see no shortage of fans taking to social media to complain about that set-up. “I don’t want to pay more to watch fights,” some say. After all, to watch the top fare, one must subscribe to HBO and Showtime, the premium cable operators. And let’s not forget, fight fans are also being offered the option to sign on for more content from the DAZN crew. On September 10, its site platform will go live and it has an agreement with Eddie Hearn and Matchroom Boxing to show a steady stream of bouts. That service costs $9.99 a month. With that, viewers are being promised scraps from Matchroom Boxing – 16 U.S.A. events, as well as 16 U.K. events, with the entire fight cards streamed. Also included: World Boxing Super Series Season Two – 15 events featuring 21 tournament bouts spread across three weight classes. (Plus DAZN is offering Bellator MMA battles.) There are 70 fight nights planned across Matchroom, World Boxing Super Series and Bellator and will present a variety of original content, from profiles to news shows to fight sports features – as well as archived fights.

So fans’ reactions to the GGG vs. Canelo II pricing are not isolated in a vacuum. And I am not above it all; I’m not made of money, so I also need to think frugally, as a consumer. But food for thought: Our sport is still something of an outlaw sport. Ours is a niche sport, not baseball, football, basketball or hockey. Hello, we feature fighting and fighting isn’t for everyone. OK, baseball isn’t for everyone either but our sport has risk elements attached to it which keep some entities from getting involved. So boxing doesn’t have the support from advertisers that the other sports do. And that limits the stream of revenue which can go into its coffers. Most of you reading this know Al Haymon wanted to bring boxing back to a golden age, steer away from the PPV model, which keeps the best bouts behind a pay wall. And in the three years he has tried to re-shape the model, we have somewhat moved more in the direction he attempted to navigate but not fully. Loeffler and Golden Boy are independent contractors who came together and decided to put together an event. They don’t have pre-existing relations with, say, a major network…and a slew of regional networks, as the big four sports do. Major League Baseball bigwigs can count on revenue from live events and that mostly goes in the owners’ pockets. Much of that trickles down in the form of healthy salaries for the laborers. And the games enjoy healthy viewership numbers, to varying degrees, and, as live events, are somewhat immune from the DVR-ing mentality.

People have to watch now or risk being out of the loop, regarding what happened to their favorite teams. Those solid ratings mean programmers can command a decent sum to place advertising on their shows. Again in boxing, that option isn’t so much viable. Talk to the people who produce boxing on ESPN, who have to cut and scratch to get advertising, so we see lots of pitches from beard dye manufacturers and fancy pillows made from exotic material. Talk to Main Events CEO Kathy Duva about how hard she tried to interest advertisers in the fare she was pitching to networks, then cable nets. It’s hard to sell the uncertainty in the ring. The main event could end 30 seconds into round one and, also, the outside-the-ring hijinks make Madison Avenue wary of boxing.

So short story long, you will be asked to pay $84.95 to see if Canelo looks to exert violent revenge on GGG, for consistently referring to him as a cheater. One option to cut cost is to invite fellow fans and friends over, ask them to help defray the charge by splitting the tab. Many proud fans don’t like to employ this tactic because it makes them feel cheap, so I get it if you are resistant to that option. Also sometimes it’s 10 p.m. and you had a long day and you aren’t keen on having company. Maybe you just want to eat hot wings and drip sauce on your own sofa, without others judging your leisure.

So do the math. If you have HBO and Showtime and bought ESPN+ and now DAZN, your out-of-pocket costs for the month are not inconsiderable. But as much as anything, it’s a function of the nature of the sport we enjoy. If boxing wasn’t a niche sport and enjoyed the mass of eyeballs that basketball and football do, the power brokers wouldn’t go their routes to generate revenue. And lest anyone forget, that is the main driver of the sport, which is the boxing business. Making money is the name of the game and the people in control believe PPV is the best way to make the most money.

Truly, it is what it is.