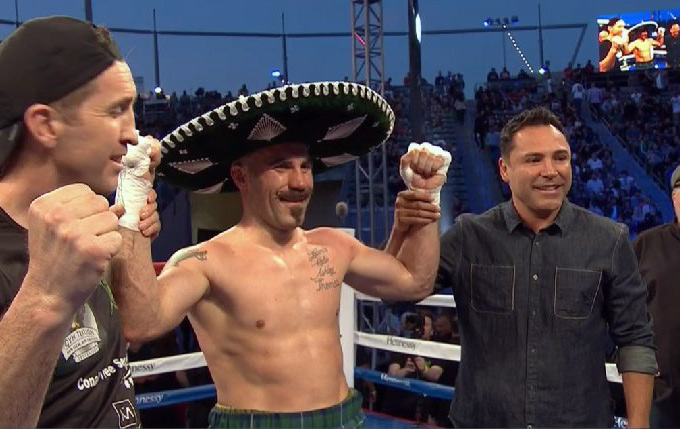 David Lemieux had once again vowed to separate him from his senses during their media conference call Wednesday, and really, Spike doesn’t seem worried.

They’ll meet September 15 in Las Vegas on the HBO pay-per-view undercard of Canelo-GGG 2, and both middleweight punchers are treating their matchup as a prelude to a crack at a title fight next year.

Lemieux, a former 160-pound titleholder himself, is rated No. 8 by The Ring; Spike is No. 10. The winner will be well-positioned to face Canelo or GGG next year, but first, they need to take care of business.

“He talks about knocking me down and knocking me out cold; I’ve never been down on the canvas in my career,” said O’Sullivan, a 33-year-old native of Cork, Ireland. “He’s been knocked down several times, he’s lost to all different style of fighters.

“David had his chance against Golovin and he got destroyed and I think he’s going to get destroyed again on September 15. Lemieux is going to be an easier fight for me than Douglas, there’s no doubt about that.”

O’Sullivan (28-2, 20 knockouts) was referring to Antoine Douglas, whom he knocked out in the seventh round in December. The victory over the former top prospect was easily the biggest of O’Sullivan’s career, and the performance vaulted him into The Ring’s rankings in the stacked middleweight division.

After Spike left the ring on the HBO telecast, it was time for Lemieux to challenge Billy Joe Saunders for a middleweight title, and his foray had a decidedly different ending. Saunders toyed with Lemieux en route to a shutout decision victory. Now, Lemieux needs a victory over Spike to remain relevant at 160 pounds.

After all, he was already knocked out by Golovkin in 2015, and in this sport, recency bias is king.

“This fight is going to get me back on top so I’m preparing myself for that,” said Lemieux (39-4, 33 KOs), whose third-round highlight reel win over Curtis Stevens earned The Ring’s knockout of the year in 2017. “Going back the last few years I’ve been working against a lot of injuries. They’ve been put in the past. I’m in tremendous shape and I’m feeling great.

“I can use both my hands; I can use everything, all my tools. I think Lemieux is back and I’m about to demonstrate what I’m about. I think a lot of people are going to be surprised what I bring to the table.”

Lemieux claims he fought Saunders with a torn left labrum, which hampered his ability to throw the hook and jab. He says surgery was a consideration, but ultimately, the injury healed with rehab.

He also says his weight issues are behind him and that his “body is going to look a lot different.” Lemieux returned in May with a 12-round decision victory over journeyman Karim Achour, but the minor title wasn’t on the line because Lemieux weighed two pounds over the division limit.

“This fight is definitely going to go my way, you guys watch and see, I’m going to make Spike eat all his words,” he said. “Don’t worry, I’m going to beat your ass, it’s not going to be no walk in the park. I’m not coming here to lose, I’m coming to destroy you. Don’t take me lightly, keep working hard in the gym, you’re going to need it.”

The trash talk elicited more laughs from Spike, who knows he has all the momentum going into the fight, even if Lemieux possesses the better resume.

O’Sullivan also found great humor in Lemieux’s excuses for the loss to Saunders. O’Sullivan, too, was dominated by Saunders (2013 at Wembley) but says he’s a far better fighter now who takes the sport more seriously.

Saunders still has contempt for Lemieux, and even set up O’Sullivan with the sparring partners he used in camp last fall to emulate the Canadian slugger.

“Look at David, he doesn’t look like a guy that trains like I do,” O’Sullivan said. ” … He gets tired easily in a lot of his fights. I don’t think he can win this fight. I think he’s a one-trick pony, he just does the same thing over and over again. I know what’s going to be coming.

“I’m going to steal the show in spectacular fashion. I’m going to obliterate him. Nothing personal, you’re just in my road. I’m sorry, but you’re in my way.”

Two desperate middleweights who own tremendous punching power and little boxing skills? All the ingredients are there for a fight of the year candidate, and it’s shaping up to be one hell of an appetizer to the Canelo-GGG rematch.