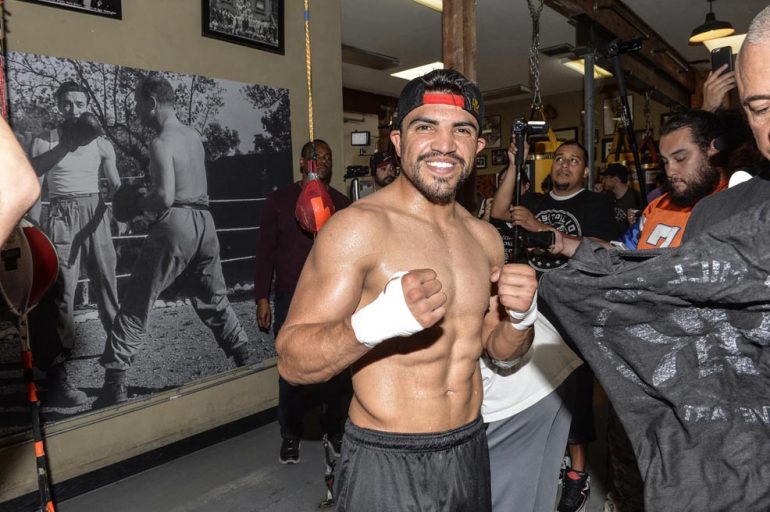 With a grudge match against Brandon Rios no longer on the table, Victor Ortiz will face another Mexican-American puncher.

In what could be a fun fight, Ortiz will take on hard-hitting John Molina Jr. on Sunday, Sept. 30, Premier Boxing Champions (PBC) announced Thursday afternoon. The 10-round bout will take place at the Citizens Business Bank Arena in Ontario, California, and air live on FS1 and FOX Deportes (9 p.m. ET/ 6 p.m. PT).

Ortiz was penciled to face Rios this summer. There were reports that the fight was verbally agreed to but it was never finalized, which disappointed fight fans who had hoped for the two rivals to finally get it on in the ring.

But an Ortiz-Molina bout could be a decent replacement. Both fighters carry power, both have been on the canvas and both make for exciting fights.

In his last bout, on Feb. 17, Ortiz, who resides in Ventura, California, was deemed lucky to hold Devon Alexander to a 12-round majority decision draw. The former WBC welterweight titleholder has only lost once in his last five bouts but that has been over a period of three-and-a-half years.

At age 31, Ortiz is aware of what Molina brings to the table but is undeterred in his quest to win another world title belt.

“We’ve known each other a long time and we’re always in exciting battles so fans should expect nothing less on Sept. 30,” said Ortiz, who is trained by Joseph ‘Hoss’ Janik. “I had a broken eye socket from an injury in the second round of the Alexander fight, but I’m feeling 100 percent now. I’m ready to take what is rightfully mine and that’s another world title down the road. It’s going to be a war from round one and I can’t wait.”

Molina (30-7, 24 KOs), who resides in nearby Covina, has not fought since Dec. 15, when he knocked out Ivan Redkach in the fourth round. The 35-year-old puncher has won three of his last four bouts, with the lone defeat coming to then-WBO junior welterweight titleholder Terence Crawford.

In other significant bouts, Molina suffered a knockout loss to Antonio DeMarco in September 2012 and dropped Lucas Matthysse twice before being stopped in the 11th round in April 2014.

“I respect Victor and everything he’s accomplished in the game, but I know that I have the tools to overcome everything he does,” said Molina, who has been fighting as a pro since March 2006. “Everyone knows that I’m in it to win it. We’re both going to be ready to mix it up and throw bombs. There is no way that I see this fight going the distance. It’s going to come down to heart, and I’m going to be there until (the) final bell.”

“Victor Ortiz versus John Molina Jr. has ‘war’ written all over it and should be another in a long line of memorable battles featuring these Southern California fan-favorites,” said Richard Schaefer, who is the Chairman and CEO of Ringstar Sports. “These two men are known for leaving it all in the ring and giving the fans incredible action from the opening bell. I have no doubt that this will be another outstanding showdown, with the winner setting themselves up for even bigger things in the star-studded welterweight division.”

Tickets go on sale today (Friday) and an undercard will be announced at a later date.