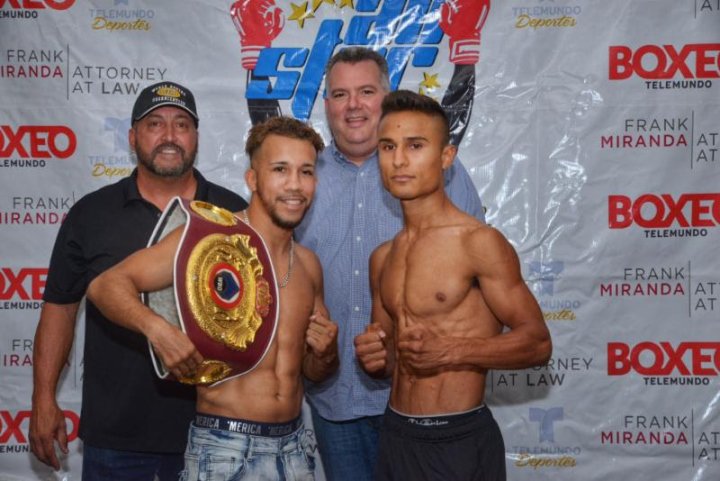 It was an upset victory as Lozano entered the fight ranked No. 4 by the WBO and had faced the better opposition between the two bantamweights. This was also the first time Espinoza, who resides in Tijuana, Mexico, had been scheduled to fight in a 10-round bout.

The battle between the two punchers favored Lozano in Round 1, as he walked Espinoza down and connected with the sharper punches.

Both fighters connected with several combinations and stunned each other midway through the second round. A barrage of punches against the ropes eventually dropped Lozano, but he found his feet and bravely fought back. However, moments later, a left hook followed by a right cross dropped him a second time. Lozano was able to beat the count, but his corner signaled for referee Frank Gentile to stop the fight and save their man from further punishment at 2:43.

Espinoza has won his last 11 fights since losing an eight-round split decision to Christian Nieto Ayala in May of last year.

“I studied films of his previous fights,” said Espinoza afterwards. “He would look to knock out his opponents, but I used that against him. I did feel his hooks when he connected, but I had to hold my ground and connect as well. I was prepared to go the 10 rounds or go for the knockout.”

Lozano (15-5, 11 KOs), who hails from nearby Bowling Green, has now lost four of his last six bouts.

Rodriguez was the sharper and more consistent puncher, landing lead or counter right hands to the head of Arroyo.

Featherweight Juan Carlos Rivera stopped Luis Hinojosa (31-15, 18 KOs) of the Dominican Republic to run his record to 15-0, 10 KOs. Rivera is of Puerto Rican descent and resides in nearby Orlando.

Lightweight Nestor Bravo (14-0, 10 KOs) won by stoppage when Isaias Cardona (24-14, 16 KOs) could not answer the bell for the second round. Cardona claimed his hand was injured.