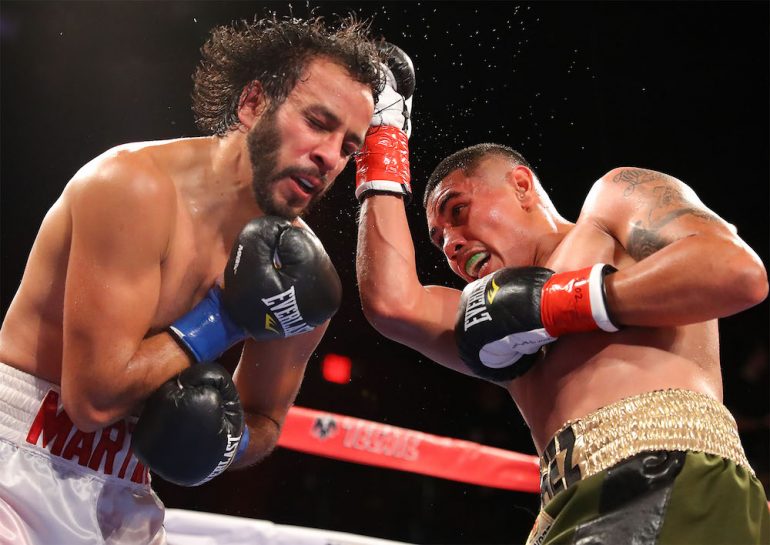 LOS ANGELES – Emilio Sanchez battered and broke down former junior featherweight contender Christopher Martin Friday night, forcing Martin to remain on his stool before the sixth round of the LA Fight Club main event at the Belasco Theater.

It was all Sanchez from the opening bell, as he overwhelmed and forced Martin to fight defensively throughout the entire bout. Sanchez, who resides in the Los Angeles suburb of Pacoima, relentlessly closed the distance and unleashed combinations to Martin’s head and body.

Martin attempted to stand his ground and fight back, but his punches had little impact on Sanchez, and the San Diego resident’s punch output dropped with each round. He was also taking an enormous amount of punishment as Sanchez’s punches took their toll. Sensing Martin was weakening and slowing down, Sanchez increased his aggression, battering Martin in the center of the ring in Round 5. After the round ended, on the advice of Martin’s corner, referee Jack Reiss stopped the fight.

Friday night marked Sanchez’s first fight since March 22, when he was knocked out by Filipino Eugene Lagos in Round 2. After the fight, Sanchez decided to move up from the junior featherweight division and campaign at 126 pounds. Based on the result of the Martin fight, that decision looks to be permanent.

“I feel faster and stronger moving up in weight,” said Sanchez after the fight. “I feel stronger at 126 pounds. I focused on working the body (of Martin) and throwing uppercuts on the inside. I want to get back in the ring as soon as possible.”

Tanajara (15-0, 5 KOs) landed the more telling blows, utilizing his reach and connecting from the outside. By the midway point of the fight, Morales’ right eye was bruised from the amount of left hands Tanajara landed. Morales’ punch output decreased with each round, and the eye got worse to the point that it was almost shut. All three judges scored the bout 80-72 for Tanajara, who is trained by Robert Garcia. Morales, who resides in Cidra, Puerto Rico, drops to 7-3 (4 KOs).

The stronger Muratalla connected with the sharper and more effective punches throughout most of the fight. Muratalla dropped Lorenzo early in the second round with an overhand right to the head. Lorenzo was game, fighting back and connecting with an occasional hook or cross, but Muratalla easily outboxed him over the last two rounds. All three judges scored the bout 40-35 in favor of Muratalla. Lorenzo, who is from Perpignan, France and was making his United States debut, falls to 2-2.

– Lightweight Recky Dulay (11-3, 8 KOs) knocked out Juan Sandoval (7-23-1, 4 KOs) at :35 of Round 5. A right cross dropped Sandoval flat onto his back, prompting referee Jack Reiss to immediately stop the fight.