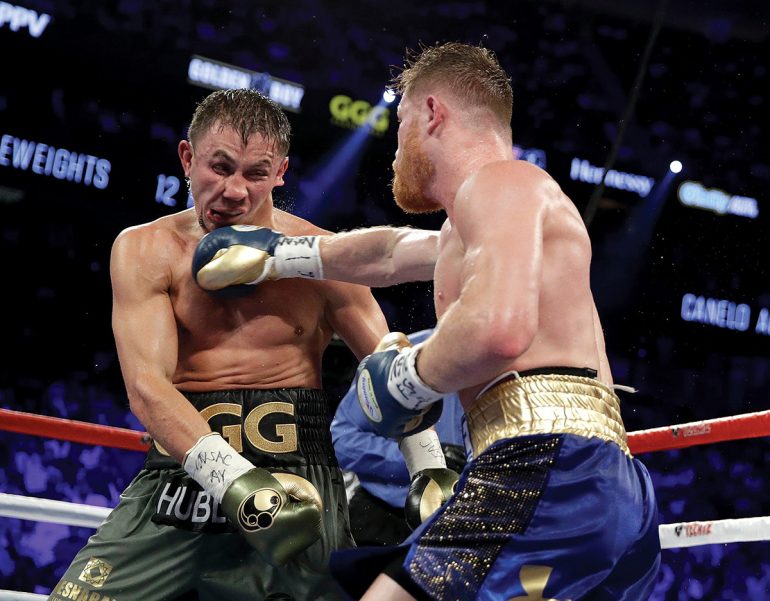 Canelo Alvarez is just 35 days away from his highly anticipated return encounter with Gennady Golovkin, and he’s putting in work in San Diego looking lighter and quicker.

The Mexican star came on late when he met GGG in September, and that success in the championship rounds gave Alvarez all the confidence that he doesn’t need to tinker with much of his game before he meets the Kazakh again in another middleweight championship fight September 15 in Las Vegas.

“The last fight gave us the blueprint for this rematch,” said Alvarez, 27. “We don’t necessarily have to change the strategy; we just have to add to what we did. We have to throw more punches in every round. We need to do that to remove any doubts about the victory.”

When Alvarez met Golovkin in the center of the ring, he found success, but he didn’t fight that way for much of the night. Instead, the 27-year-old was boxing and moving. He used lateral movement against GGG and looked for counter-punching opportunities, a strategy Golovkin and his trainer, Abel Sanchez, bemoaned.

They want Alvarez to come forward and mix it up, and while he’s not likely to wildly trade shots with such a big puncher, he sounds like he might be a tad more aggressive.

The former Ring middleweight champion has been working on his power combinations in training camp with longtime coach Chepo Reynoso, and he’s made no secret that he wants to stop Golovkin.

Of course, that’s no easy task. The 36-year-old’s chin is regarded as one of the best in boxing. Canelo has insisted it’s personal now after his scheduled May 5 bout with Golovkin was postponed due to Alvarez’s failed drug tests.

Alvarez has maintained his innocence, while GGG again called him “dirty” on Thursday. Soon, they’ll be just that — words — and if the lead-up is any indication, the rematch promises to be more violent than their first bout.