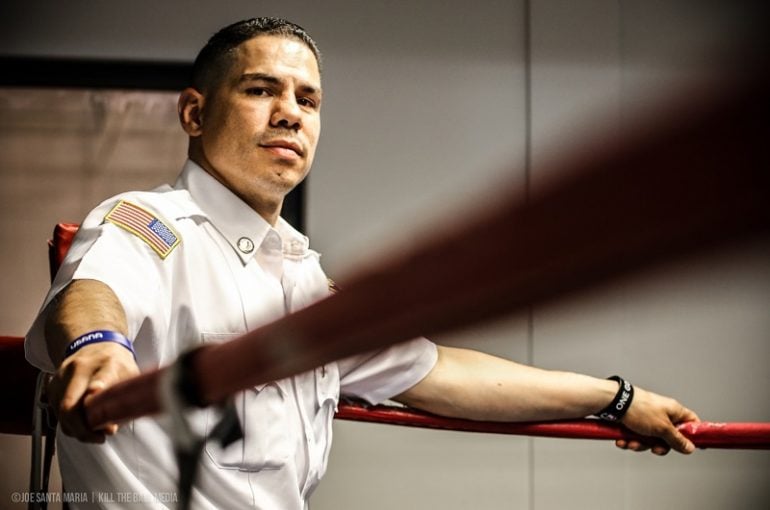 Not old but, in some circles – one being the squared circle – not young.

For every Bernard Hopkins, a freak of nature, a genetic marvel, there are dozens of other folks whose desire and ambition get stopped by Father Time’s edict: Thou shalt not box when you are old-ish.

I’m not telling Jose Antonio Rivera he’s old…but I did kind of insinuate he’s old-ish when we chatted about the upcoming promotion he’s putting together, and on which he’s fighting.

The Massachusetts-based resident boxed as a pro from 1992 to 2008, took time off, boxed twice in 2011, and then hung up the gloves. He’s grabbed WBA welterweight and junior middleweight crowns in a more-than-respectable run, especially for a Massachusetts boxer, being New England isn’t exactly a consummate hotbed of pugilism.

He was done…or wasn’t.

Rivera (41-6-1, 24 knockouts) shoved Old Man Father Time out of the way, and grabbed the mitts off the wall. He will be lacing up again on August 17, in Worcester, Massachusetts, at the Palladium, scheduled in an eight-rounder against Ruben Galvan (27-26-4, 10 KOs), who last fought in March of 2014.

“My son and I used to talk about his goal/dream of us boxing on the same card together,” Rivera explains to me, after finishing his day job, and then boxing training. “After years of talking about it, we decided to stop talking, and make it a reality.”

So on August 17, Jose will headline, and AJ, age 27, will make his pro debut. That in itself is remarkable, being that AJ was born with spina bifida, and doctors predicted he’d be in a wheelchair, and wouldn’t enjoy a full lifespan.

Hello? No wheelchair, and was going to be boxing right before dad, on a card Pop is promoting. AJ is a graduate of Johnson & Wales, with a major in sports management, and is a boxing match-maker.

So is this event mainly about father bonding with son? “We do have a strong bond but it was more to support his dream, and help him bring awareness to spina bifida, which he was born with,” Rivera tells me. “In part we would be joining history with father and son boxing on the same boxing event, and my son making history for being the first person with spina bifida to have a pro fight. He already did that when he boxed as an amateur for a bit. I wasn’t a fan of him getting into the sport of boxing. I kept him busy with other sports like baseball, basketball, and even football, but, at about 13 years old, almost 14, he asked if he can get into boxing. I said, on one condition: I train him, and he shows me he is serious!”

“Yeah, I am proud of him, and admire his resilience, toughness and his desire to want to accomplish big things with his life!”

For the last 17 years, Rivera has worked as a court officer in Massachusetts. After stepping away from the sport in 2011, he thought he ditched the itch. But the itch returned…“I discussed it with my girlfriend and my kids,” said Rivera, divorced in 2015, and proud dad to a seven-month-old baby girl, as well as four older children, two boys and two girls. “I am a new dad again, and my busy schedule was about to get busier, so I needed to make sure I had their support!”

So on fight night, AJ was going to go on before Jose but red tape has them in change-up mode.

“Unfortunately AJ will not get medically cleared in time for our August 17th boxing event. So the ‘making history’ component of our event has been put on hold. Promoting in Massachusetts, though, has been a great experience. We are from Worcester, Massachusetts, where all of our boxing events have been promoted at, and my August 17 comeback will be there. The fans definitely enjoy when we have some great boxing matches, and we are trying our best to bring that to them. Some fans are diehards, and some only come to support certain boxers. So naturally some boxing events do better than others.”

“It actually has not been that different! Maybe the body not recovering as quick as I did when I was younger but, for the most part, I have been able to train like I am use to,” Rivera says. The mental side is a bit different now, as he’s already tasted the champagne, and therefore doesn’t have the extra fuel a rising product enjoys. “There were definitely days where after training, I said, ‘Why am I doing this to myself?’ No, for the most part, I have been blessed that I have kept myself healthy, and my body has been able to withstand this grueling training camp,” he says.

So is the forthcoming fight one of a set…or will Jose see how it goes, and go from there?

“We will see how it goes but, if everything goes good as planned, we have a tentative end-of-the-year date for my 50th pro fight!”