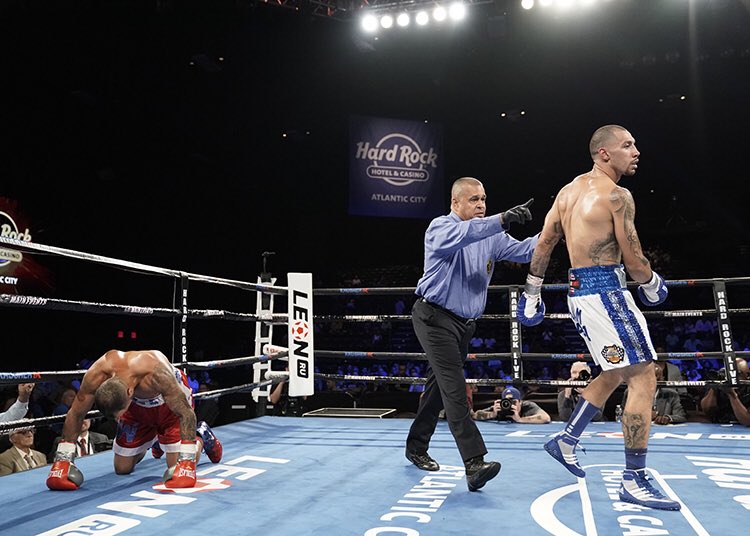 Crowd favorite Frank Galarza improved to 20-2-2 (12 KOs) with a second-round knockout of Alex Duarte (13-6-1, 10 KOs) on the Sergey Kovalev-Eleider Alvarez undercard at the Hard Rock Hotel and Casino in Atlantic City, New Jersey. The official time of the stoppage was 1:57 of Round 2.

Galarza scored the first knockdown in the second round by landing a perfectly placed right hand to the body, dropping Duarte. Duarte managed to get up but was still shaken when Galarza timed another clean body shot, this time sending Duarte down for good.

This is the third straight victory for Brooklyn’s Galarza since leaving Al Haymon to sign with Main Events after two tough defeats at the hands of Jarret Hurd and Ishe Smith.

The boxer-turned-reality TV star took the short drive from his native Philadelphia to shake the ring rust off and get back in the win column with a strong performance over Perez, who resigned himself to allowing Dargan to get his punches off with little to no attempt at defense from the Colombian fighter.

This is Dargan’s first bout since his stunning defeat to unheralded Tony Luis in January of 2015 in Connecticut. After the loss, Dargan decided to take a break from boxing and married recording artist Lil’ Mo, and the pair joined the popular Love & Hip Hop television show. Dargan recently reached out to his uncle and former trainer, Naazim Richardson, and asked him to help him train for his return to the ring. 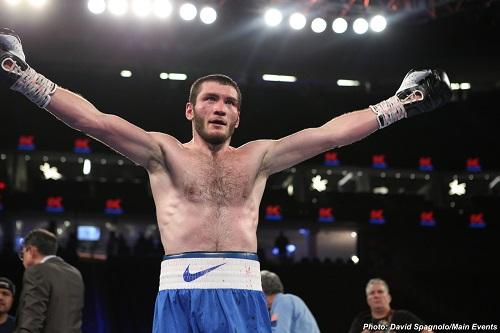 Hard-hitting middleweight Bakhram Murtazaliev (13-0, 11 KOs) scored a first-round knockout of Fernando Carcamo (23-9, 18 KOs). The official time of the stoppage was :41 of the opening round.

Murtazaliev came out charging against Carcamo, throwing hard combinations and not allowing the Mexican fighter to get settled. After setting Carcamo up with three jabs, Murtazaliev unloaded a big right hand and caught Carcamo flush, sending him down to the canvas with authority. Carcamo made an attempt to beat the count but referee Eddie Claudio counted him out and waved the bout off.

This is now nine consecutive stoppages for the 25-year-old Murtazaliev, who grew up in Chelyabinsk, Russia, just like his good friend Sergey Kovalev, who now co-promotes him. Murtazaliev also trains with Kovalev’s trainer, Uzbekistan’s Abror Tursunpulatov, in Oxnard, California.

Ashkeyev has now stopped his last three opponents and he thoroughly dominated Flores with blistering combinations both up top and to the body. Ashkeyev knocked the Ecuadorian’s mouthpiece out in the second round while in the midst of 11 unanswered punches. After getting the mouthpiece reinserted it didn’t take long for Ashkeyev to knock it back out again. When Flores spit his mouthpiece out in the third round after another big right hand, referee Maulana Murdaugh took a point away from Flores.

Ashkeyev continued the onslaught in the fourth, landing a big three-punch combination that staggered Flores, who was looking for the ropes to hold on to, causing Murdaugh to call an end to the bout.

The 29-year-old Ashkeyev, who hails from Merki, Kazakshatn, now trains in Oxnard and is co-promoted by Kovalev and managed by Egis Klimas. 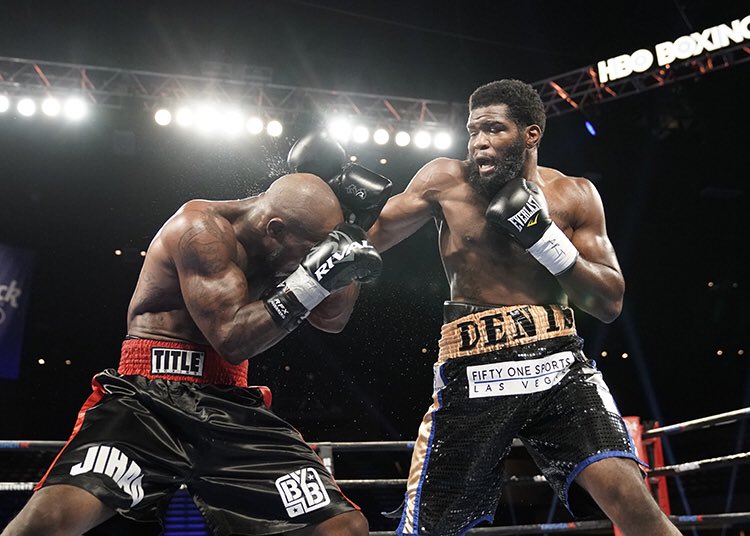 The New Jersey native Douglin engaged Alexander in a street fight and switched from orthodox to southpaw to land the quicker shots.

The 30-year-old Douglin had Alexander fighting off the ropes for much of the bout and trapped the St. Louis native in the sixth, not allowing Alexander to get off any of his own shots. Alexander tried to come on in the seventh round and had his best moment in the bout until the referee warned him for hitting below the belt. Alexander tried to pick up where he left off before the brief interruption, but Douglin decided to throw back and Alexander lost the only momentum he had.

Alexander is the older brother of former world champion Devon, who has a big fight of his own tonight against Andre Berto roughly 150 miles away in Long Island’s Nassau Coliseum. Vaughn’s own career was disrupted for 12 years when he was sent to prison. He told his promoter, Main Events, he only wanted tough fights as he began to resume his boxing career. 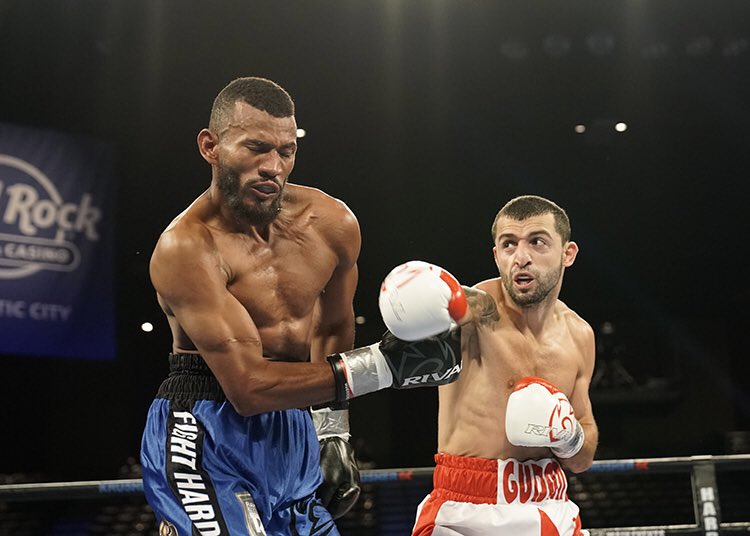 The 27-year-old Gogokhia dominated the Colombian Montes with a stiff right jab that kept Montes at bay the entire bout. Gogokhia had Montes in trouble briefly in the third and fourth rounds, but the Georgian boxer was unable to put Montes away. Gogokhia now trains in Oxnard and is also managed by Egis Klimas.

In the opening bout of the evening, Israel Villarreal improved to 3-0 by winning a unanimous decision over Kieran Hooks (3-1-1, 1 KO). The three official scores at ringside were 39-37.

The 21-year-old Villarreal used lightning-quick combinations to stay ahead of Hooks and keep the Philadelphia native off balance for much of the scheduled four-round bout. Villarreal, the son of former professional boxer Oitilio Villarreal, has now fought on the last three Sergey Kovalev cards and is a two-time New York City Golden Gloves champion.