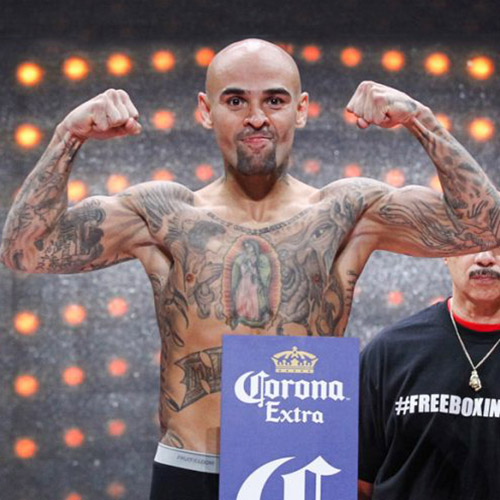 LONG ISLAND, New York – After 17 months on the shelf,  and at the age of 37, Luis Collazo showed Saturday evening that he is still a bad, bad man.

The perennial welterweight contender put a beating on Bryant Perrella, who is eight years younger at 29, winning a majority decision in a fight that some felt could have been stopped at several junctions. One judge, the inexperienced Allen Nace, inexplicably scored the fight even at 95-95, while the other two had it 96-94 and 98-92 for Collazo (38-7, 20 knockouts).

Despite missing time after undergoing surgery to repair a torn left bicep a year ago, Collazo picked up where he left off in his last fight, when he sent Sammy Vasquez crashing in six in February of 2017. Collazo was the aggressor throughout, walking through the weaker shots of Perrella (15-2, 13 KOs) and landing regularly with his overhand left.

There were no official knockdowns, though Perrella did hit the canvas after a rough eighth round assault which was ruled a slip. Somehow the fight continued through to the final bell, though the matter had already been decided.

“Perrella didn’t have much power, which allowed me to just stay on top of him and smother his punches and play the aggressor,” said Collazo, an 18-year veteran who has fought a who’s who of top welterweights in his time, including Shane Mosley, Ricky Hatton, Andre Berto and Keith Thurman.

The fight, which took place at Nassau Veterans Memorial Coliseum in Uniondale, N.Y., was part of the PBC on Fox card headlined by Andre Berto-Devon Alexander. Collazo-Perrella, plus the Marcus Browne-Lenin Castillo and Gary Antuann Russell fights before and after were part of a separate broadcast on Fox Sports 2.

After dominating yet another young upstart, Collazo says he’s ready for whomever they put in front of him next.

“I’ve had a lot of good fights that prepared me for this. I showed why I’m the veteran in there. I want the best in the division. I’m not getting any younger so I’m ready for any challenge,” said Collazo.

In the sub-card’s headliner, 2012 U.S. Olympian Marcus Browne had to get off the canvass to win a decision over Lenin Castillo. It was the second time Browne (22-0, 16 KOs) had been down as a pro, the product of a fifth round left hook followed by two left clean follow-ups, which sent him stumbling down.

The 27-year-old from nearby Staten Island showed poise and maturity in tying up Castillo (18-2, 13 KOs) and clearing his head for the remaining 90 seconds in the round, and got the better of the action for the remainder with his stronger jab and counterpunching.

Much of the fight was met with boos from the crowd on a night Browne had been expecting to fight Sergey Kovalev for the WBO light heavyweight title before he was replaced following news of an arrest for domestic disputes, according to silive.com.

Browne claimed afterwards that the knockdown”was mostly a slip” but concedes that he wasn’t as impressive as he’d have liked to be.

“I just wasn’t consistent enough or effective as I wanted to be tonight. I fought in spurts for the most part. I needed to be more consistent to get the performance I wanted.”