Mikey Garcia has Robert Easter Jr. in front of him but looks ahead to Errol Spence Jr. 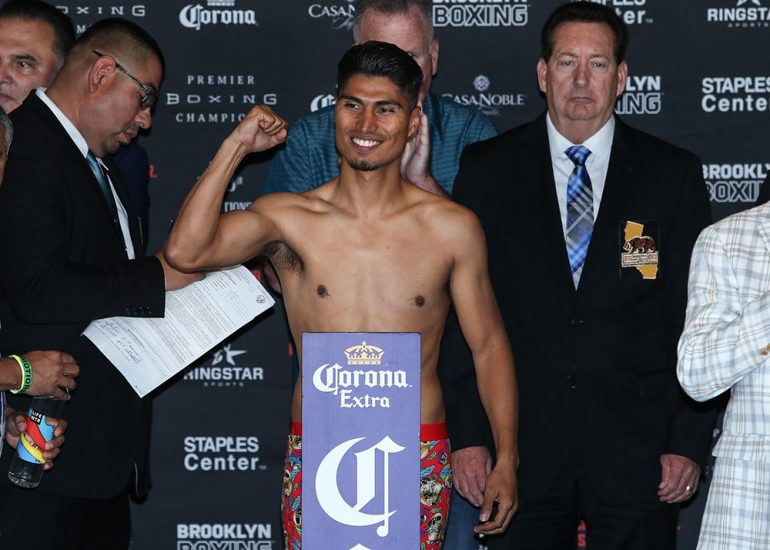 Too often in boxing it’s about the next fight, if only because what’s being served up at the moment isn’t all that appetizing.

In this instance, that’s not the case. Like Garcia, Robert Easter Jr. is an undefeated titleholder, and he’s a worthy B-side in Saturday’s lightweight unification title tilt at Staples Center (10 p.m. ET, Showtime).

Garcia, though, craves much more. He sports pound-for-pound chops, and is widely regarded as one of the five best fighters in world. Therein lies the problem: Garcia is always expected to win.

To truly test himself; to truly taste adversity, he needs to match wits with a foe who isn’t just as formidable in the ring as he is, but also one much greater in physical stature.

Only then, after he beats a fighter of such ilk, does Garcia believe he’ll truly be appreciated as he approaches true star status. And that’s where Spence fits in to the picture.

When Garcia (38-0, 30 knockouts) first started tossing around Spence as a future opponent, the proposed matchup was met with derision. With each passing moment that Garcia mentions the welterweight titleholder, though, the prospects of the fight become more and more tangible.

For Spence isn’t just regarded as an elite talent; he’s far stronger — and bigger — than Mikey. Spence is a full-fledged welterweight who one day soon will comfortably compete at junior middleweight.

He’s incredibly strong, and utilizes pressure to break his foes down. Mikey is a normal-sized 135-pounder, and even he’s dwarfed by Easter (21-0, 14 KOs) , who stands five inches taller at 5-foot-11.

In Garcia’s two forays at junior welterweight, the added weight didn’t seem to do him any favors. Sure, Garcia comfortably outpointed Sergey Lipinets in March, and even dropped the 140-pound titleholder, but the 30-year-old was busted up and lost some rounds.

It stands to reason then, that if Mikey were to climb a rung to yet another weight class, and take on no less a fighter than Spence, that it could spell doom for him and in destructive fashion. And that right there is exactly why Mikey fancies the fight.

“Until they see me against someone like Spence, they won’t know what I can do,” Garcia told a small group of reporters following a recent workout. ” … I want to fight the top champions, I want to fight for titles. I know they don’t want me to move up to welterweight. That makes me want to do it that much more.”

Indeed, Garcia would be marked as a major underdog if the fight with Spence comes to fruition. Spence isn’t just really good with skills to match — he’s proven to be an elite puncher. Garcia, for as good as he, is there to be hit, as evidenced in his last fight, a decision victory over Lipinets.

And since Garcia has floated the idea of fighting Spence, social media has buzzed with laughter that the Southern Californian wouldn’t be able to hang with the welterweight titleholder, much less have any prayer of victory. That’s all fine with Mikey. The bigger the challenge, the greater the glory if — well, in his mind, when — he comes out on top.

“I’m telling you, I’m here to take the biggest fight, the biggest challenges,” Garcia said. “And that’s why I’m willing to move up to welterweight. I’m very serious when I say that I will be at welterweight soon.

“I really look forward to taking on someone like Errol Spence for that reason, because everybody says, ‘Don’t do it, it’s the biggest threat, the biggest challenger, I’m way out of my league trying to go there.’ That’s what actually excites me and motivates me the most. I wanna prove to everybody the kind of fighter that I am.

“I haven’t had those opportunities yet. I’ve been fighting champions and undefeated champions, but it seems like I’m always the favorite. It seems like my accomplishments don’t get enough credit sometimes because, ‘Well, you’re supposed to win. You’re supposed to beat that guy.’ But a fight with Errol Spence is a whole different league and that’s why I’m really interested in getting that fight.”

Garcia long has lobbied to headline on pay-per-view, and that day isn’t too far off. A lightweight title unification bout with Vasiliy Lomachenko would do the trick, but Garcia has a frosty relationship with his former promoter, Top Rank, who handles the career of the Ukrainian. And besides, Garcia says “Lomachenko is an easier fight,” than the challenge Spence presents.

Should Garcia top Easter, the battle with Spence seems destined to happen, whether it’s six months from now or a year. Spence will even be ringside in Los Angeles on Saturday to scout the matchup, and said Thursday on Instagram, “Let him be dumb enough to move, we want that smoke.”

Richard Schaefer, Garcia’s de facto promoter, is also confident Garcia-Spence will materialize at some point, and he’s bullish on the kind of figures the fight could pull in.

Of course, before Garcia can even dream of a fight with Errol Spence, Robert Easter Jr. will have his say on the matter Saturday.