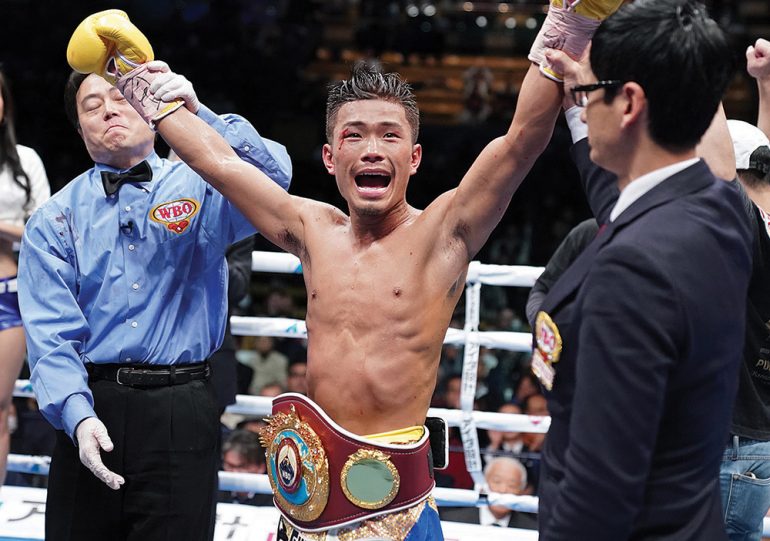 There will only be one Saludar world titleholder this month.

Sho Kimura used a withering body attack and pipe-bursting pressure to walk Froilan Saludar down Friday in Qingdao, China, stopping the Filipino in six rounds to retain his WBO flyweight title for the second time and set the table for an all-Japan showdown with two-division champ Kosei Tanaka.

The end began in round five, as a left hook to the body from Kimura (17-1-2, 10 knockouts) folded Saludar (28-3-1, 19 KOs) forward, before a followup attack put him down near the bell. The issue had been decided as Saludar offered no resistance in the sixth round, and was dropped for the count on another body shot, 54 seconds into the round.

The loss means that Saludar won’t make it 2-for-2 in world title fights in July 2018 after Vic Saludar won the WBO strawweight belt a couple weeks earlier against Ryuya Yamanaka.

It also means the path is clear for Kimura to face the mandatory challenger Tanaka (11-0, 7 KOs) on September 24 in Nagoya, Japan. Tanaka, who had previously held the WBO belts at 105 and 108 pounds, made his flyweight debut in March, stopping Ronnie Baldonado in nine rounds.

Kimura is rated no. 5 in the division by The Ring while Tanaka is a spot lower at no. 6.

Also on the card, Knockout CP Freshmart (real name Thammanoon Niyomtrong) retained his WBA strawweight title with a road win against Chaozhong Xiong of China. The scores were 118-110 on two cards and 116-112 on the third, all to Freshmart (18-0, 7 KOs), who is rated no. 2 by The Ring at 105 pounds.