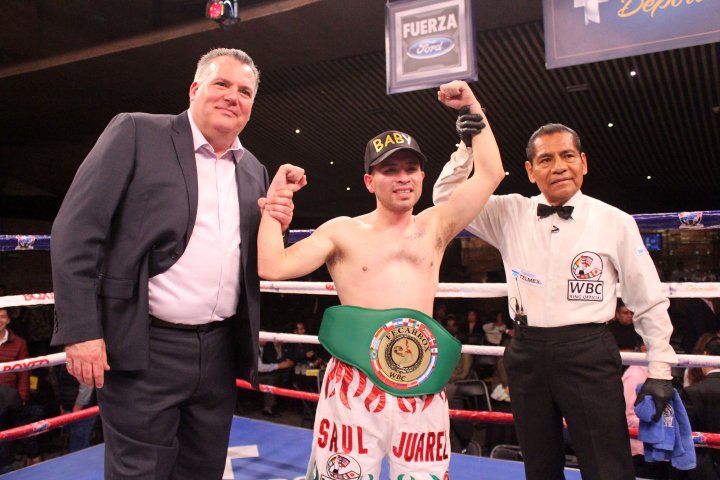 Saul Juarez was looked upon as just an opponent, in recent fights. After an impressive victory in his most recent outing, he is now a world title contender.

Juarez will face Mario Andrade, Friday night, at the Auditorio Blackberry, in Mexico City. The 10-round junior flyweight bout will air on Telemundo (11:35 p.m. ET/ PT).

There is a lot on the line between Juarez and Andrade, including a regional title belt and bragging rights between the two Mexico City residents.

Juarez (24-8-1, 13 knockouts) challenged WBC strawweight titleholder Wanheng Menayothin (aka Chayaphon Moonsri) two years ago this month, losing a close unanimous decision over 12 rounds. Juarez would go on to lose his next three bouts, including a 10-round majority decision to then-unbeaten Abraham Rodriguez on December 6.

The 27-year-old Juarez was brought in to face contender Gilberto Parra on March 9, which also took place at the Auditorio Blackberry. Juarez came on late in the fight, stopping Parra in round nine.

Parra was killed less than three months later, in an execution-style drive-by shooting, in the northern Mexican state of Sonora.

“I am knocking on the door for a world title opportunity and I will not let anyone get in my way,” said Juarez, who has lost decisions to Jose Argumedo, Juan Hernandez Navarrete and Milan Melindo.

Andrade (13-7-5, 3 KOs) lost by technical decision to unbeaten flyweight contender Junto Nakatani in his most recent bout on April 15. The loss snapped a six-bout winning streak.

“(Juarez) has good footwork, is elusive and I have to win one round at a time,” said Andrade, who lost five out of his first nine pro fights. “(Friday night) is an important assignment. He is a strong opponent but we worked hard (in training camp) to have our hand raised in victory.”

Unbeaten junior featherweight Osvaldo Nunez (3-0) will square off against Kevin Nunez, who will be making his pro debut, in a six round bout.

Kevin Salgado (5-0, 3 KOs) is scheduled to fight an opponent to be determined, in a six-round junior middleweight bout.