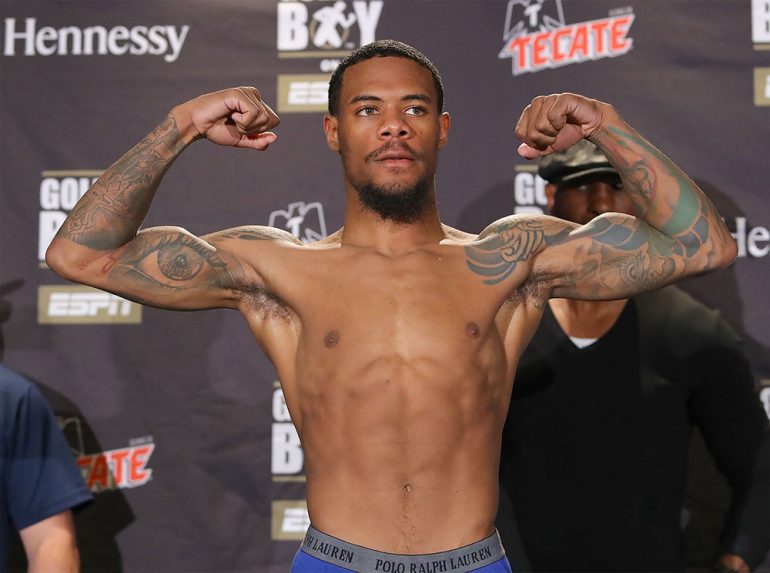 Junior lightweight Lamont Roach Jr. broke down Deivi Julio Bassa, forcing the fighter from Colombia to retire on his stool after Round 6 Friday night at the Grand Oasis Arena in Cancun, Mexico.

Roach was coming off a 10-round split decision draw against Orlando Cruz on April 19. The fight was marred by referee Luis Pabon incorrectly ruling a knockdown of Cruz a slip, costing Roach a victory.

Roach (17-0-1, 7 knockouts), who resides in the Washington, D.C., area, promised to be more aggressive and assertive in his fight against Bassa. Roach followed through on his pre-fight prediction, applying pressure from the opening bell, eventually scoring a knockdown with two overhand right hands late in Round 3.

Bassa hung in there, but his punch output dropped with each passing round. By Round 6, he looked like he was in survival mode and was stunned by Roach on two separate occasions.

At the end of the round, Bassa’s corner told referee Miguel Canul to stop the fight. Bassa drops to 20-5 (12 KOs) and has now lost three of his last four bouts.

With the victory, Roach won a regional title belt and a top-15 ranking by the WBO.

“My mentality was to make a statement and to show that I belong at the top of the junior lightweight division,” said Roach after the fight. “There were now difficulties in (Bassa) being a southpaw, because we were coming off fighting a lefty in Orlando Cruz and we were preparing for the rematch.”

“The (vacant) WBO junior lightweight title will be on the line next week (between mandatory challenger Christopher Diaz and No. 2-ranked Masayuki Ito), so I’ll be taking a close look at that fight to see who wins. Anybody that’s in my way is in trouble.”

Now fighting as a featherweight, the southpaw Sanchez was the more effective puncher throughout the fight. Perez (11-4-1, 7 KOs) did hurt Sanchez midway through the second round, scoring a knockdown late.

Sanchez regrouped and swung momentum his way, connecting with several left hands and hooks to the body of Perez. Sanchez was the more effective fighter through the middle rounds, choosing to box from the outside.

Sensing he was down in the fight, Perez came forward and increased his punch output, but most of them missed or landed on Sanchez’s arms.

Despite getting deducted a point for landing a low blow in Round 4, all three judges scored the bout 57-56 in favor of Bastar.