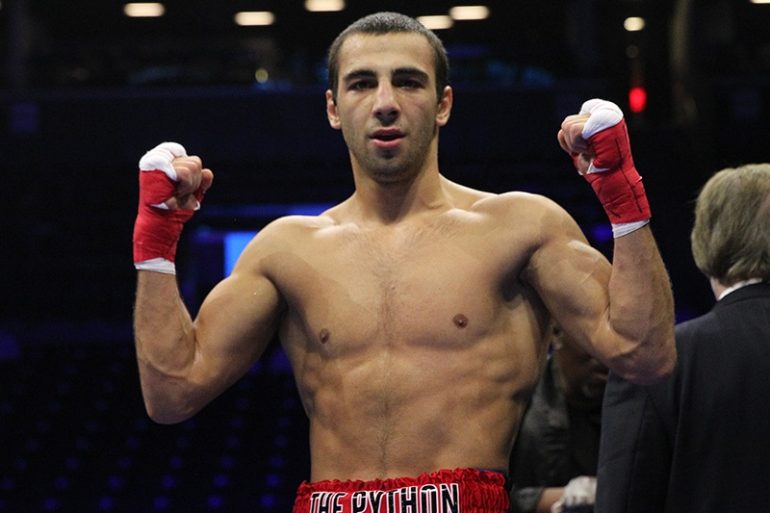 Best night of pro career and why: Butaev has easily beaten his eight opponents to date.

“I believe that my best performances are yet to come,” Butaev told RingTV.com through a translator. “I won’t highlight any of my previous fights since, I think, at this stage, I didn’t have an opponent yet at my level.”

Worst night of pro career and why: Butaev looks for the knockout; two of his opponents have seen the distance. Although he easily outpointed Gabor Gorbics and Janer Gonzalez, he is disappointed to not have scored stoppages.

“I fell in love with boxing because of knockouts,” he explained. “And any fight I didn’t win by KO is like a defeat for me.”

Next fight: Butaev had been scheduled to take part in the WBC’s Jose Sulaiman World Invitational Tournament last April. However a shoulder injury prevented him from participating.

Butaev has put that behind him, and returns tonight against Ramses Agaton, at Florentine Gardens, El Monte, California.

Agaton (20-8-3, 10 knockouts) will certainly test Butaev’s shoulder after the injury. The 28-year-old is a seasoned campaigner, who, although he has been stopped three times, usually goes rounds.

Butaev looks to get the victory inside the distance, and continue his rise.

Why he’s a prospect: Although Butaev was a promising amateur, he never appeared at either the World Championships or Olympics.

“In our country, in order to fight in the Olympics or World Championships, you not only have to be the strongest in the division but also must (have) an influential person who is behind you.” Butaev said.

During his time in the unpaid ranks, he fought in tournaments in four countries and won gold at the 2013 Summer Universiade.

As a junior, Butaev won National Youth Championship in 2011. When he moved up to the seniors, he was the runner-up in the Russian National Championships in 2012 and 2015 but was victorious in 2014.

“I have never fought anybody who is faster than me,” Butaev said. “I feel that my desire and will to win every time is higher than anybody else’s, and I believe this is my best attribute.”

Why he’s a suspect: No obvious area he needs to focus on. He’ll move quickly and has the potential to be one of the key players at welterweight, later in this decade.

Butaev has all the physical gifts but how he is able to fully transition and deal with fighters who are quicker, just as skilled and as strong as him will likely define just what he achieves, as a professional.

Butaev says he’s keen to get more experience as a pro.

“I want to be the best at what I do and dedicated constantly to improving all my skills,” he said. “First of all, I need to get more experience in professional boxing.”

Diaz feels there is one main area on which he is focusing the Russian’s improvement.

“Helping him not to be so reckless” said the trainer. “He gets a little excited when he hurts his opponents, and gets reckless, at times. Don’t want him to get caught approaching his opponent.”

Storylines: Butaev was born in Salsk, a small town in the south of Russia, but grew up 672 kilometers (418 miles) away in Khasovyurt.

“Ninety-five percent of boys are engaged in martial arts,” he explained. “Therefore in school years, we had to fight a lot, and I think that this is also a kind of training and preparation that builds temper and character from very (early) childhood.”

At a young age, he entered a boxing gym with his brother, and began training. He hasn’t looked back since.

“I love him not for his athletic achievements but for being a great man who motivated people and gave them faith.”

The young Russian is married, has one child and the couple is expecting another soon. He likes to spend time with his family and play soccer.