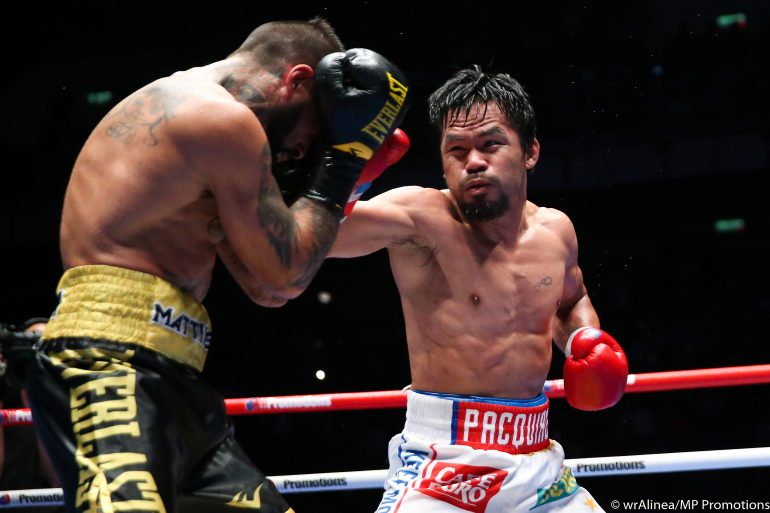 Last weekend, Manny Pacquiao scored his first knockout win in nearly a decade with a seventh-round stoppage of Lucas Matthysse, but doctors had advised him to call off the fight after he was diagnosed with a heart ailment.

According to a report by the 8-division champion’s publicist Aquiles Zonio on Philboxing.com, Pacquiao was taken to Cardinal Santos Memorial Hospital in Manila on the afternoon of July 8 after complaining of breathing difficulties “several times” during training camp.

Among the tests Pacquiao underwent was an angiogram, which revealed that he had a congenital heart ailment, the details of which weren’t expounded on in the story. The revelation caused doctors to plead with him to withdrew from the fight in Kuala Lumpur, Malaysia, which took place July 15 (July 14 U.S. time).

Pacquiao objected, and instead signed a waiver, presumably acknowledging the danger his heart condition placed him in.

One test the specialists had him undergo caused Pacquiao to learn something about his fitness levels that he found interesting.

“I was required to run on a thread mill, then an ECG (electrocardiogram) was conducted. The result was quite amazing. The result showed that my heart rate and rhythm improve as my physical activity increases,” said Pacquiao, 39, in the report.

Just a handful of Pacquiao’s team accompanied him to the hospital. His wife Jinkee and their children had arrived in Malaysia a week before Pacquiao and team and weren’t notified of the incident until later. He also didn’t inform his training team immediately to “avoid demoralization,” the report says.

Pacquiao says that Buboy Fernandez, his long-time best friend and head trainer for the Matthysse fight, broke down in tears after being told what happened, while those who accompanied him to the hospital were also distraught.

“Those who were with me were saddened and crying. But I told them, ‘don’t worry, I’ll be okay and I’ll do everything to win the fight,’” Pacquiao is quoted.

Pacquiao didn’t train on July 10, the day after arriving in Malaysia, but jogged around the Kuala Lumpur Botanical Garden the following day and worked out at the gym inside the Le Meridien Hotel.

The fight was Pacquiao’s first in over a year following his shock decision loss to Jeff Horn in Brisbane, Australia, moving Pacquiao to 60 wins, 39 by knockout, against seven losses and two draws.

Pacquiao isn’t the first boxer to deal with heart issues during an active career. Evander Holyfield briefly entered into retirement in 1994 after being diagnosed with a congenital heart issue, specifically a noncompliant left ventricle, following his heavyweight title loss to Michael Moorer. He returned to the ring 13 months later and fought another 25 times.

An email to Pacquiao’s adviser Michael Koncz about whether he will undergo further tests or treatment after the fight was not returned by the time of this story’s publication.