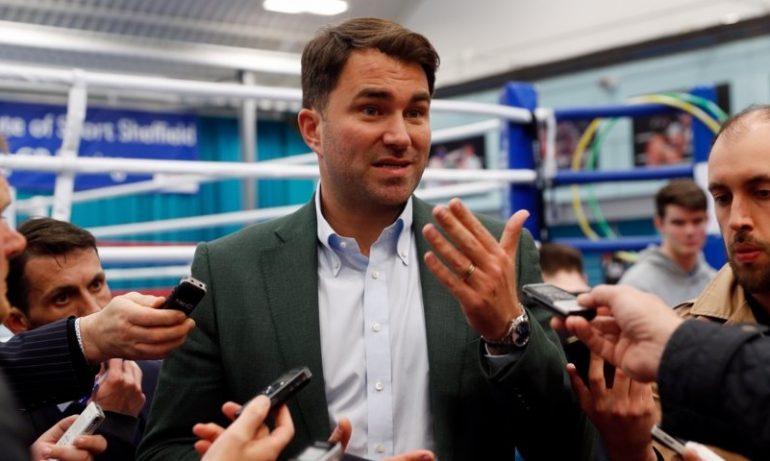 Boxing is in a state of transition. What else is new?

From the shifting of the driver’s-seat stars, from the Floyd Mayweathers and the Manny Pacquiaos, we’ve now found new blood to rep the sport at the top levels, and they are cementing their brands of stardom now.

But I’m speaking more of the way the sport is presented.

That shift took a step, maybe two, today with the specifics of the DAZN deal being fleshed out for media in NYC.

Eddie Hearn, the brazen Brit, took to a stage in a not-overly-AC’d studio in the West Village as waiters sashayed, offering libations like an avocado/citrus drink accented with rosemary. Ah, but lest you think they tried to go overboard and reinvent a wheel … nah, boxing tradition showed up. Heavyweight Jarrell “Big Baby” Miller barked at Brit heavyweight top-gun Anthony Joshua and those two glared and stared and threatened to escalate the proceedings as Hearn earned his keep playing peacemaker. Yes, there is often no better way to promote the sweet and savage science than by having two jumbo-sized practitioners bellow at each other as media stands on alert.

That time honored tradition aside, back to the transition …

We are in the age of “cord cutting,” but of course there still needs to be platforms to watch events on and organizations to accumulate revenue from fight fans. Enter Perform Media, which owns DAZN, the streaming service which goes live in America on September 10. Their service will be purchasable for $9.99 a month, we learned. Hearn and ex-ESPNer-turned-executive chairman John Skipper and Perform CEO James Rushton told the assembled that they aim for this service to get you good bang for your buck and also to be a disruptive presence in the space.

I asked Hearn, point blank, if he isn’t the top boxing promoter on the planet. Yes, yes he is, he told me. And part of that confidence comes with landing this megabucks deal and putting Joshua’s next scrap, against Alexander Povetkin, on the DAZN stream. “The biggest star in world boxing,” he touted Joshua, who owns a 21-0 mark.

Some folks were hoping for Hearn to trot out a cadre of A-siders that he’s lured away from other power brokers. That will be more of a work in progress, it looks like. Jessie Vargas attended, and we were told that he will headline the first DAZN card in America on October 6 in Chicago, against TBD.

Hearn brought out female ace Katie Taylor, the Irish standout, which is yet another signal of a shift in the sport. She will fight Brooklyn’s Cindy Serrano in Chicago in October. 175-pound champ Artur Beterbiev will be showing off his skills on DAZN, Hearn informed us. Yes, he will be working with other promoters. Thompson Boxing’s Danny Roman, the WBA junior featherweight champ, will be on the DAZN stream team, we were told. The splashiest Hearn hire showed off a fun personality, as Demetrius Andrade, the Rhode Island talent who has been beset by inactivity, promised he’d be embracing meaningful tangoes in the middleweight class soon. He drew chuckles when he showed off some Elvis Presley-style karate moves after Miller and AJ had their tete a tete.

Yeah, sorry if you were thinking there’d be a Charlo sighting. Neither Jermell nor Jermall were in the arena, but Hearn told me he’d had chats with Jermell, so maybe that’s to come.

Hearn also wanted to make clear that people will be able to watch all the fights on a DAZN card, so not just A-sides and titlists will be made a big deal of. To that end, Hearn brought out three young guns: Nkosi “King” Solomon, Rehat Mati and Nikita Ababiy — a heavyweight, a welterweight and a middleweight — who are all advised by Keith Connolly, who manages Danny Jacobs, who fights for Matchroom.

Back to the concept … Bellator boss Scott Coker attended and talked up fare which will stream on the DAZN platform, so it’s clear Skipper and Co. would like to see FIGHT fans ponying up to watch good scraps, be they in a ring or a cage. “In my opinion, this is the greatest thing to happen to boxing in America in a long, long time,” Hearn said.

Hours of content are being promised, and Hearn mentioned that DAZN will stream season 2 of the WBSS, and also that the second U.S. show will come on the heels of the first, on October 20 in LA.

My three cents: I sense pushback among many fans, but this is what happens when significant change is introduced, whether it be when a soda company changes their formula or a technology change is activated and people used to just pressing the “power” button have to log on a different way. Hearn isn’t, or doesn’t seem worried … and why would he? He’s being compensated excessively for the honor of being the agent driving talent onto the new staging platform. This will boil down to, I think, the quality of product. If Hearn puts together compelling matches featuring talented athletes, this stream deal will pick off naysayers, surely if slowly.

Follow Woods on Twitter, and see a play-by-play of the DAZN fete from earlier today on there.