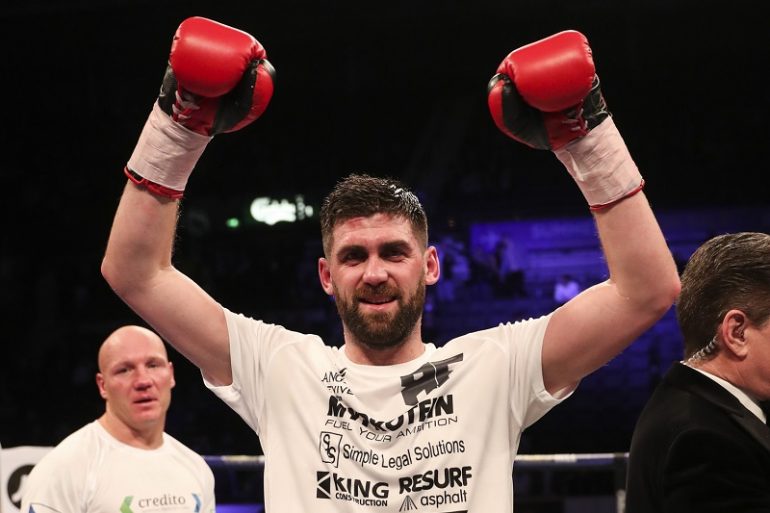 That is the way to win.

British super middleweight Rocky Fielding ventured to Offenburg, Germany, and blasted out local favorite Tyron Zeuge in five rounds with a brutal performance at the Baden-Arena. The official time was 2:30.

Fielding, a former British and Commonwealth champion, hurt the Berlin star badly with a left uppercut in the fifth and pursued his man to the ropes. A quick touch upstairs was followed by a terrific left hook to the body and Zeuge went down on all fours. The home fighter’s trainer, former light heavyweight titleholder Juergen Braehmer, had seen enough and threw in the towel midway through the referee’s count.

The first round was evenly matched with good assaults from both men. Zeuge, aware of his opponent’s superior punching power, feinted his way into range and let his hands go in quick bursts. Fielding (27-1, 15 knockouts) utilized his height and reach to score long shots from the outside.

In the second, Zeuge (22-1-1, 12 KOs) settled into a rhythm and was able to impose his boxing skills on the visitor. Fielding, however, refused to be outgunned and chose to move inside and trade. The German volume-puncher appeared far from comfortable with that strategy and quickly began to give ground.

The breakthrough came in the fourth when Fielding countered off the ropes with a ferocious burst and turned his man. Zeuge was hurt for the remainder of the session, throwing back in desperation as Fielding followed up with several blows on the inside. My initial opinion was that Zeuge had also sustained serious mouth damage.

Even after the minute’s rest one sensed the writing was on the wall and Fielding’s finish was very well executed. This was, by far, the biggest victory of the Liverpool man’s career.

Editor’s Note: The victory saw Fielding capture a version of the WBA super middleweight title which is unrecognized by THE RING.