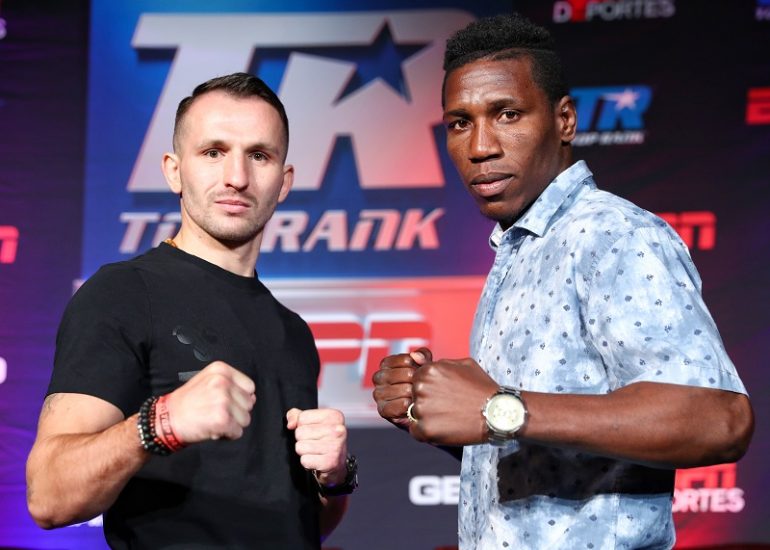 Egidijus Kavaliauskas may be referred to as a prospect by some boxing publications but he believes he is a legit contender – and is ranked thusly – in a loaded welterweight division.

He will attempt to demonstrate his pedigree, Saturday night, when he squares off against Juan Carlos Abreu at the Save Mart Center in Fresno, California.

The 10-round bout will precede the main event between WBC junior welterweight titleholder Jose Ramirez and challenger Danny O’Connor. Both fights will air live on ESPN and ESPN Deportes (9:30 p.m. ET/ 6:30 p.m. PT).

Kavaliauskas (19-0, 16 knockouts) has become a favorite among boxing fans with his aggressive, come-forward style that has produced several knockout victories. Kavaliauskas, who goes by the nickname “Mean Machine,” has stopped five of his last six opponents.

In his most recent bout, on February 16, Kavaliauskas stopped former contender David Avanesyan in the sixth round.

The 30-year-old Kavaliauskas, who represented Lithuania in the 2008 and 2012 Olympic Games, now resides in the boxing hotbed of Oxnard.

“I’m just happy to fight in Fresno,” said Kavaliauskas, at Wednesday’s open workout. “It’s close to where I live in Oxnard. It’s very hot (here). On Saturday, it’ll be even hotter inside the ring. It will be a very good fight.”

Kavaliauskas may have a dangerous opponent early on in the fight, in Abreu (21-3-1, 19 KOs), who hails from the Dominican Republic. Abreu has won three of his last four bouts.

The soft-spoken Kavaliauskas wants to make a statement at the expense of Abreu.

“Every time I get in the ring, I try to give the fans an entertaining fight,” said Kavaliauskas, who is trained by Marcos Contreras and managed by Egis Klimas. “I want to show them what I can do. Even though I’m always smiling, I’m very mean in the ring. That is why they call me the Mean Machine.”

Kavaliauskas’ accomplishments in his young career, thus far, have not gone unnoticed. Kavaliauskas is now ranked No. 9 by The Ring and is rated among the Top 5 in three of boxing’s major sanctioning bodies.

The WBO ranks Kavaliauskas at No. 2.

Whether or not Kavaliauskas is worthy of being ranked that high remains to be seen. Kavaliauskas knows a thing or two about fighters fighting for world title belts early in their pro careers, as he trains alongside recently-crowned The Ring/WBA lightweight champion Vasiliy Lomachenko and mandatory WBC light heavyweight challenger Oleksandr Gvozdyk.

Kavaliauskas believes he is also worthy of being mentioned among the best fighters at 147 pounds.

“I feel that I’m ready to challenge for a world title. Challenging the winner of (Manny) Pacquiao vs. (Lucas) Matthysse will be a dream come true.”

“The fans (in Fresno) can expect a great fight from me on Saturday.”