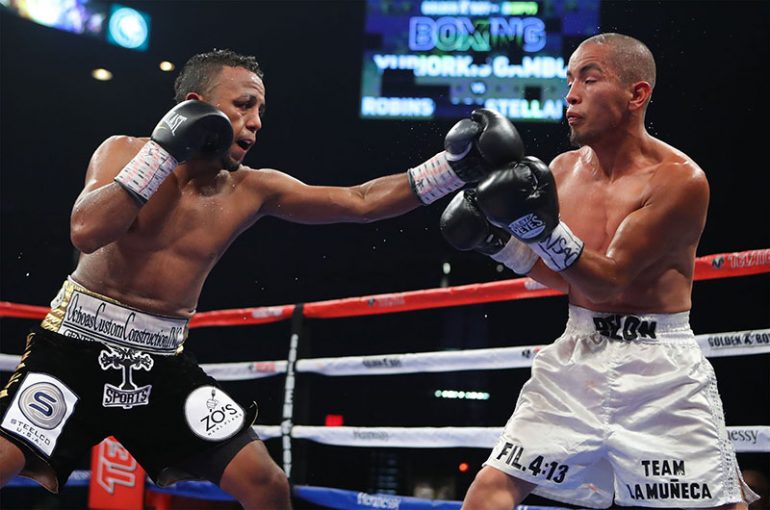 After suffering his first loss as a professional to WBC junior featherweight titleholder Rey Vargas, Oscar Negrete will move back down to bantamweight to take on Diuhl Olguin over eight rounds on Friday.

The fight will take place at the Belasco Theatre in Los Angeles and Estrella TV will air the three-bout broadcast live (10 p.m. ET/ 7 p.m. PT). The Golden Boy-promoted card will also be streamed live on RingTV.com.

After fighting almost exclusively at bantamweight, Negrete (17-1, 7 knockouts) moved up to challenge Vargas but dropped a one-sided 12-round unanimous decision on December 2.

Soon thereafter, the 30-year-old Colombian who now resides in the Los Angeles suburb of Rosemead, came to the conclusion that his former weight class makes more sense.

“I’m very happy because I will finally make my return,” said Negrete, who is promoted by Golden Boy Promotions. “I’m coming back after fighting for a world title, though that loss was at 122 (pounds). Now, my goal is to fight for a world title in the division I really belong in, which is 118 pounds.”

His opponent has faced several contenders and unbeaten prospects over his past several fights. In his most recent outing on May 12, Olguin (13-9-3, 9 KOs) defeated 14-1 Kevin Rivers Jr. by split decision over six rounds.

Negrete is not overlooking Olguin, who also has a unanimous decision victory over former contender Horacio Garcia.

“Olguin has a very misleading record; one that his opponents should never be too confident of. I like this fight because he is a fighter who will make high demands of me and will give me a good idea of where I am.”

It should be noted that Olguin entered the Rivers fight having lost six of his previous seven bouts.

“Negrete is a great boxer and I think our styles will mesh well in a way that will give a great fight to the knowledgeable boxing fans of Los Angeles,” said Olguin, who resides in the boxing hotbed of Guadalajara, Mexico. “I will not fail to take advantage of (this) opportunity.”

Opening the ‘Boxeo Estelar’ telecast will be a four-round welterweight bout between unbeaten Raul Curiel (3-0, 2 KOs) and Demetrius Wilson (2-7).