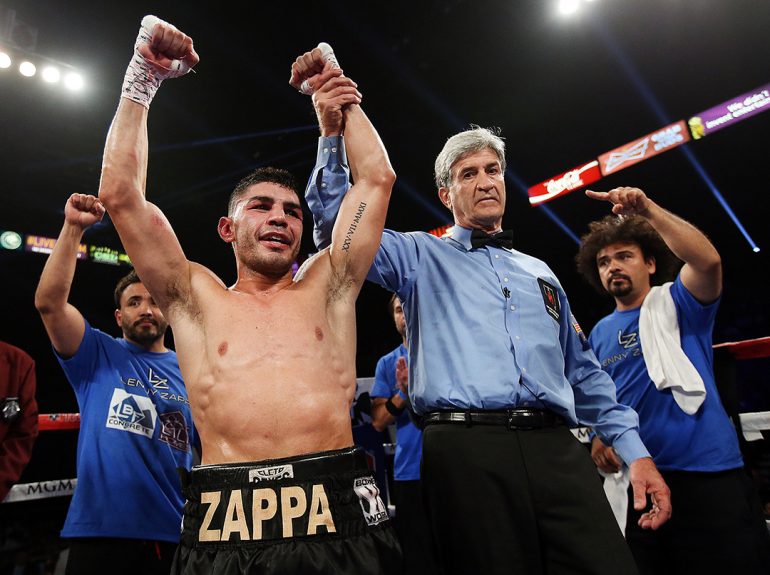 Lenny Z didn't always spill a quart of blood during his entertaining fights. Here's a clean-faced Zappavigna after a victory in 2016.
01
Jul
by Ryan Songalia |

Sunday afternoon was a peaceful one for Lenny Zappavigna as he enjoyed a mini vacation with his wife and two children in Los Angeles before they returned to Sydney, Australia the next day. His face is still badly swollen, as is to be expected, but he offers no other complaints as he fields a phone call before sitting down to lunch.

It’s a complete contrast from the crimson violence which marked the day before, when he slugged it out with Alex Saucedo. In the building the Oklahoma City Thunder call home, Zappavigna and Saucedo banged out in a which drew comparisons to the battles of Arturo “Thunder” Gatti, and left the ESPN commentators to christen it as a Fight of the Year candidate.

For “Lenny Z”, 30, it was an opportunity to get a second world title opportunity after he fell short in his first attempt back in 2011, when he was outboxed by Miguel Vazquez for the IBF lightweight belt. The winner would become the mandatory for WBO junior welterweight titleholder Maurice Hooker, but it was the issue of cuts, which has plagued him throughout his career, that crept up once again at an inopportune time.

“I thought I had him there, I thought this is it. I was just trying to get him out of there, I thought the ref was gonna jump in,” said Zappavigna (37-4, 27 knockouts) of the fourth round, when he landed an overhand right which buckled the 24-year-old hometown fighter’s legs and led to dozens and dozens of blows which would have forced a stoppage in a lot of other buildings.

Then, for a lack of a better term, Zappavigna’s face fell apart. A cut over his right eye, and cuts above and under his left eye, began dripping blood into his eyes, causing blurry vision and leaving him defenseless from the fifth round on, while an entirely swollen left eye made stopping right hands an impossibility. With their fighter unable to see punches coming, the corner stepped into the ring in the seventh round to spare him from unnecessary punishment.

Another crack at a world title would elude him. 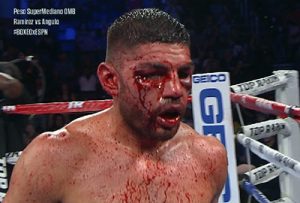 “I always felt so close to just beating him and fighting for a world title, that was my dream. It hurts when you have a dream in your head and you don’t get a hold of it,” said Zappavigna as he sighed.

“That’s life, I have two beautiful kids to live for. There’s a lot more than fighting.”

From the high of combat to the low of defeat, it was his manager and close friend Mike Altamura who sobered him with a recommendation which came from the heart.

“He was speaking to my wife and was like ‘that’s enough. I don’t want to be a part of it anymore. I want him to be able to talk to his kids when he’s 50. I want him to be healthy.’ I understand where he’s coming from,” said Zappavigna.

Altamura, a quick-witted rising star among international matchmakers, had worn an outfit on fight night imploring people to “Stop Glorifying Rats.” With his fighter a crossroads, Altamura behaved like a man among mice.

“It was a tough conversation, but a natural one. I love the kid like family. He’s everything that I love, respect, and admire about the sport, a true throwback gladiator, and I can’t rightfully keep seeing him cut up and swell like that anymore,” said Altamura, chatting from 30,000 feet in the air as he flew back to his office in Dubai.

“He’s a very bright, intelligent young man with an amazing wife, Paris, and two beautiful kids. It’s time for the next chapter in his life. Boxing’s only a small component of life. He has another 50-plus years potentially ahead to appreciate the memories and explore other interests.”

Zappavigna listened closely and agreed, though with some reluctance. He’s still a young man by boxing standards, but the tissue around his face just won’t cooperate with his goals.

“It’s hard to say I’m retiring but I think I’ve got no choice. My skin on my face is just getting worse as I go on in my career,” said Zappavigna, but like many fighters, his mind wanders back to the “what-ifs.” 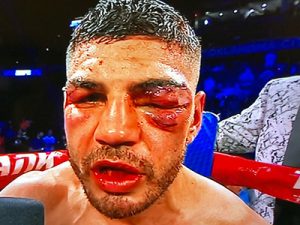 “It’s more to do with the eyes that is pulling me to retirement. I feel good, I’m in great shape, I feel healthy, I’m young, I’m fit. If I can fix [my eyes] up, I wouldn’t mind having another go.

“Now, I don’t know where I stand. If I got a phone call for a good fight for good money, definitely I’d take the fight. I’m just taking it easy and seeing what happens. I think it’s over for the moment.”

The writing had been on the wall for some time, and it was written in bright red coloring. He had suffered little cuts before, but it wasn’t until his 2010 fight against Fernando Angulo which he won by unanimous decision in California, that the issue of bleeding began to threaten his career.

“From there on, just getting cut and cut, and now my skin just doesn’t hold up. You just touch me and I cut. It’s like I’m going in knowing I’m gonna cut,” said Zappavigna.

Though he fell just short of world title level, there were plenty of highlights along the way. There was his fight against Ji-Hoon Kim in 2010, who had just weeks earlier given Vazquez a credible run for the vacant title belt. Zappavigna smoked him in 101 seconds. There was also the 2014 TKO win over Misael Castillo in Melbourne, which Zappavigna lists as one of his most technically masterful performances, and then in 2016, when he battered the once beaten Chinese tough guy Ik Yang at the MGM Grand.

His face had looked similarly mangled during his eighth-round knockout loss to Sergey Lipinets, and he figured another loss would be the end of the road.

What will Zappavigna do with his life if he has already fought his last round? He admits he hadn’t thought much about it, but says he’s interested in nutrition and might want to study to be a dietician. 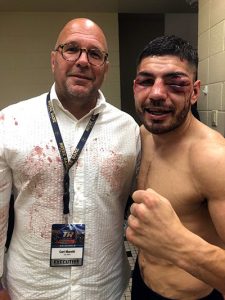 Zappavigna was in good spirits after his bloody war with Saucedo. Here he poses with Top Rank’s VP of Boxing Operations, Carl Moretti. Photo / @CarlMoretti

We admire fighters for the blood, sweat and tears they sacrifice for the sport. In recent years, few if any have given more of their plasma for the fans’ entertainment than Zappavigna. Blood splattered everywhere Saturday night, from the ESPN’s camera in the neutral corner to the shirt of Top Rank executive Carl Moretti, who joked afterwards that his button-down would have to follow Zappavigna into retirement.

It was fitting that his final fight, if his retirement sticks, comes against Saucedo, another all-action brawler who has bled in his last three fights.

“I’d like to see him be a world champion, I think he should beat Maurice Hooker if he goes on to fight against him,” Zappavigna said, before repeating three times that Saucedo is “tough.”

Zappavigna has a well-deserved break coming up. Once the cuts heal and the swelling subsides, he has perhaps an even tougher fight to overcome against the temptation to step back into the ring.